Victims of the State: The family of Tony Lester to Steve Twist. 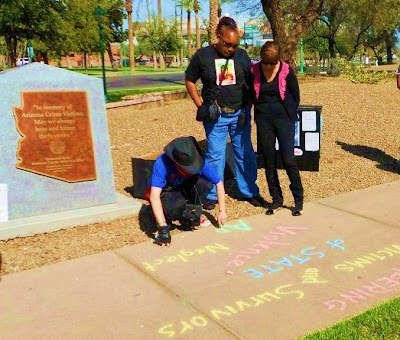 The aunt of Tony Lester and the mother of Dana Seawright
remember other victims and survivors of state violence, neglect and abuse
at the AZ Crime Victims' Memorial, AZ State Capitol.
(March 9, 2012)

Steve Twist's June 16 editorial in the AZ Republic defending the AZ DOC (dismissing the research and articles done by investigative journalist Bob Ortega earlier this month as "malicious) has invited a response from the family of Tony Lester. His Aunt, Patti Jones, forwarded the following comment to us.

I urge other families who have lost loved ones to the state prison system due to violence, abuse and neglect to read Twist's letter and post to the AZ Republic's site as well. He's the guy who explicitly wrote prisoners out of the AZ Victims Bill of Rights, making the state and state agents the only criminal perpetrators whose injured and dead are constitutionally deprived of the rights all other victims (and their survivors) can count on.

I think we should invite Mr. Twist and his prosecutorial colleagues to help us rewrite that part of the state constitution, so that every rape, murder, and abuse victim's rights are equally protected, whether or not they are in custody for an offense...if he won't then at the very least he should get out of the way of those trying to reduce further victimization of prisoners and trauma to their families...


"First of all Mr. Twist I realize that we as United States citizens are entitled to freedom of Speech that is what I LOVE about our country so well.  I certainly appreciate your input regarding your opinion in regards to the INHUMANE TREATMENT within our AZ Prisons, but I am a NAIVE OUTSIDER looking in; to the treatment of the mentally- ill prisoners within our prisons.

It was not until my Nephew Anthony Lester was placed into the ADOC that our Family realized the mentality of all prison officials regarding the care and treatment of our mentally-ill. Especially when all prison staff and administrators were repeatedly warned of Tony's fragile mental state of mind and when Doctors within the prison were warned of the voices that Tony heard and all prison staff referred to Tony as a Manipulator and Gaimer of the system....

From the moment our family received the news of Tony's injuries we were told that he was taken to hospital with non life threatening injuries, and then to receive  a call a few hours later that Tony had died!!!!   Then  the worse thing was to view this ICS Video taken that night that Tony committed suicide which showed a  nineteen and half minute video in which for approximately twelve minutes correctional officers stood, rummaging through the cell looking for a suicide note shining a small flashlight on Tony watching him bleed, gurgle, gasp moan struggle to breath, not one officer stepped forward to even try to render aid, now there excuse not to render aid is that he was pretty much dead so there was no need to render aid although medics when they arrived did not think twice whether or not to render aid..... What kind of human being stands around and watch someone bleed to death?????

Tony and our entire family accepted his punishment and trusted the system and the system failed Tony and more importantly my sister Tony's mother Eleanor lost her only child.  Prisons are for punishment not for the mentally ill to be warehoused and abandoned, especially when several judges recommended that Tony be placed in a mental health unit and court ordered to stay on psychotropic medications.

I realize Mr.Twist you feel prisoners are treated humanely, but how many family members and ex prison inmates tell you repeatedly how the treatment is inhumane; you feel there is humane treat but that is what ADOC and the state would like one to think, that's what I thought until our NIGHTMARE began!!!!!

We are so much better than this we are the UNITED STATES OF AMERICA!!!!!  Not a third world country, we can close our eyes to these injustices this cycle of inhumanity will continue other mothers will loose their children, the mentally-ill will be abandoned as outcasts rejects of society unless people such as Bob Ortega, KPNX channel 12 Wendy Halloran step forward and expose these travesties...."