MCSO Brutality: Catching up to the killers of Marty Atencio

I read this and wept. Thank you to Stephen Lemons for staying on it... 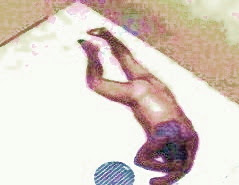 Marty Atencio, beaten, tased, stripped and left to die
by cops and guards in a "safe cell" at the 4th Avenue Jail
Phoenix, December 15 2011

It takes a twisted individual to delight in the sufferings of the mentally ill. A special type of sick, sadistic bully. The kind employed in spades by the Maricopa County Sheriff's Office.

The December 16 killing of Army veteran Marty Atencio is the latest example of the above, one of the most recent in a string of corpses that punctuates the timeline of Sheriff Joe Arpaio's nearly 20-year career as this county's top lawman.

As reported last week in my Feathered Bastard blog, the Atencio family's attorney, Mike Manning, has filed notices of claim, totaling $20 million, with both the city of Phoenix and Maricopa County in Atencio's brutal demise at the hands of Phoenix cops and MCSO detention officers working in the Fourth Avenue Jail.

Since the 44-year-old's death occurred just hours after the U.S. Department of Justice issued its scathing report on the MCSO's pattern of discriminatory policing, racial profiling, and abuse of Latinos in Joe's gulags, much has been revealed about the circumstances surrounding the Atencio homicide.

Toxicology results from specimens, including those taken at St. Joseph's Hospital hours after Atencio's arrest earlier that day, showed no illicit drugs in Atencio's system.

Phoenix Police Department reports reveal that Atencio generally was passive and compliant during the two encounters with Phoenix cops that culminated in his arrest on December 15.

Indeed, Atencio "showed no signs of being a danger to himself or others," according to Phoenix Officer Sarah Roberts.

Rather, Atencio "simply appeared to be not medicated and engaged in very random conversation," Roberts said.

Atencio was arrested in West Phoenix for scaring a resident, Cathy Boyd, after kicking the apartment door of her neighbor.

Manning quotes from Boyd's affidavit recounting details of the incident:

"Marty did not physically threaten me at any time . . . I knew there was something wrong with him, and I just wanted him to . . . get some help."

Apparently, Atencio was treated well until he was taken to Arpaio's infamous jail, where cruelty is king and an idiotic environment pervades.

The most damning evidence of Atencio's mistreatment comes from interviews with detention officers and Phoenix cops carried out within days, sometimes within hours, of Atencio's beat-down and Tasing, referred to euphemistically by the Medical Examiner's Office as a "law enforcement subdual."

The interviews were done by MCSO detectives. Manning's law office obtained them through a public-records request.

Apparently, Atencio's mind at the time was like that of a child's. Disoriented, spouting nonsensical comments, he often referred to himself in the third person as "Tony" and seemed to be mimicking Robin Williams' character in Good Morning, Vietnam.

Some detention officers and cops thought Atencio was on drugs, claiming that he told someone during his stay in Fourth Avenue that he had smoked meth earlier in the day.

But toxicology reports don't lie. Cops and detention officers are another story. Soon after Atencio was taken, brain dead, to St. Joe's, they were making assumptions to rationalize their behavior.

Thing is, the breakdown in law enforcement discipline — including a Phoenix cop's pushing Atencio with his cuffed hands bent awkwardly and painfully — cannot be rationalized.

It also included MCSO detention officers mocking and humiliating Atencio as they took his mug shot.

"They encouraged him to make funny faces and . . . kept saying, 'Let's make this one the Mug Shot of the Week,'" one witness said.

Another witness noted that when they took Atencio's picture, "It was a big joke" and "they all stood around and laughed about it."

This hilarity turned deadly once Atencio was surrounded by officers demanding that he remove his shoes. When in Phoenix custody, cops had gotten Atencio to take off his shoes by just being patient and repeating their request. Here, Phoenix police and MCSO guards were far from patient.

Two Phoenix police officers who were there to help process detainees initiated what Manning calls a "jailers' riot," even though Atencio was standing before them, arms crossed, presenting no threat.

The notice of claim identifies the Phoenix cops as Patrick Hanlon and Nicholas French.

Anthony Hatton, a detention officer who since has left the MCSO, punched Atencio in the face three times. Hatton claimed the strikes were necessary, but a couple of his fellow guards did not agree.

"He shouldn't have been punching him," detention Officer Sergio Salinas told investigators. "It was excessive."

Later, after Atencio was hauled to a "safe cell," where he would be stripped of clothing and left to die, Hatton continued the abuse, kneeing Atencio as guards held him down.

Detention officer Blas Gabrial told detectives that he yelled Hatton's name upon seeing the force used on Atencio. When asked why, he said, "Because I didn't think it was necessary."

While Atencio was lying motionless and naked in the safe cell, where he would breathe his last breath without life support, what were many of these men and women of law enforcement doing?

Laughing, joking, and cutting up like teenagers. Video shows two women — one in uniform — dancing and bumping butts. Hatton laughs and demonstrates what looks like a fighting move to other officers. A Phoenix cop eats an orange and grins.

Minutes later, they're all gathering around the door, precious seconds slipping away as they take their time getting it open.

"[Prisoners] play that game a lot," Weiers told an investigator, referring to Atencio's stillness. "You know, playing like they're dead."

Atencio wasn't playing. He already was gone. But CPR was performed, and he was rushed to St. Joe's. On December 20, his family removed him from life support.

If you saw grown men and women abusing a mentally ill or disabled person, would you do something about it?

Likely so. Which is why, ultimately, I blame the voters of Maricopa County for what happened to Atencio.

They've been told about a lot of such brutality in Arpaio's jails over the years and, so far, have looked the other way.

Posted by Margaret Jean Plews at 12:38 AM