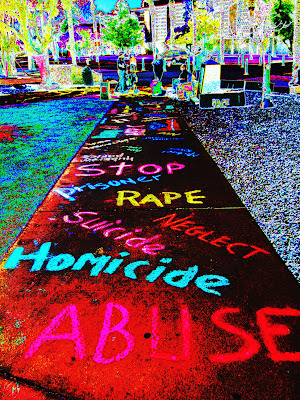 AZ Crime Victim's Memorial
Wes Bolin Plaza, Phoenix
March 9, 2012
Here's the moving slideshow of prisoners put together by the AZ Republic for this series...check it out at the source.

Arizona Prisons Can be Deadly for the Sick
by Bob Ortega
Arizona Republic
June 4, 2012

For two years, Ferdinand Dix repeatedly filed requests with Arizona's Tucson state prison staff, asking to be examined for a chronic cough, shortness of breath and loss of appetite.

When Dix, who was serving five years on forgery and drug charges, finally received a checkup, the doctor didn't notice cancer had caused his liver to swell to four times its normal size. He told Dix to drink energy shakes.

It wasn't until he was "nonresponsive" and had been transported to an outside hospital that Dix was diagnosed with small-cell lung cancer. He died a few days later, on Feb. 11. He was 47.

Dix's case is cited in a federal lawsuit accusing the Arizona Department of Corrections of medical neglect. It's a charge the system has faced before, from activists, inmates' families and at least one Arizona lawmaker.

A review by The Arizona Republic of deaths in state prisons over the past two fiscal years found at least four inmates, in addition to Dix, whose medical care was delayed or potentially inadequate leading up to their deaths. The records of these cases, together with interviews of officers, medical staff and inmates point to a system in which correctional officers routinely deny inmates access to timely care, and in which treatment sometimes falls short of accepted standards.

These deaths are among dozens of examples of preventable deaths uncovered in a broad investigation by The Republic into high rates of suicide, homicide and accidental deaths in state prisons.

Corrections Director Charles Ryan denies that health care in Arizona's prisons is inadequate or that there is an institutional indifference toward ailing inmates.

But Corrections officials do acknowledge that a long-planned privatization of prison medical care has made it difficult to fill vacancies. They also say care has been hobbled for more than a year by cuts to outside contractor payments, which state lawmakers imposed two years ago.

Allegations of substandard care, however, predate those developments. For example, the suit in which Dix is named -- filed in March by the American Civil Liberties Union and the Prison Law Office of San Quentin, Calif., -- lists dozens of allegations of inmates waiting months for medicine or medical treatment, and suffering permanent damage and disfigurement as a result.

Ash warned that providing inadequate care not only harmed inmates, it also exposed the state to costly lawsuits. His effort to fund improved care for prisoners garnered little support in the Legislature.

"They're out of sight, out of mind. And they don't vote," he said of inmates.
There is also a general lack of public sympathy for prisoners, particularly those who have committed heinous crimes.

Take Carey Wheatley, a convicted child molester serving a life term. He was 49 when he died of pneumonia on April 24, 2011, while in solitary confinement at the Florence state prison. For days leading up to his death, nurses offered him only the pain reliever acetaminophen, according to the Pinal County medical examiner's report.

Medical experts say antibiotics or antivirals are the standard course of treatment for bronchial pneumonia.

When Daniel Porter, who shot to death two clerks at a Circle K store in Tucson in 1986, was sentenced in 1992 to life on two murder charges, he begged to be put to death. But the Superior Court judge ruled that the murders were the result of mental illness -- paranoid schizophrenia -- which caused Porter to believe the clerks were trying to poison him. He also noted that Porter had been beaten and sexually abused as a child by his father and stepfather, and had been in and out of mental hospitals beginning when he was 13.

When Porter died, it was the result of hyponatremia, a chronic sodium deficiency that causes excessive thirst. Porter drank gallon after gallon of water for days, while correctional officers yelled at him to stop drinking or occasionally hit him with pepper spray, according to a report by Corrections investigators. He died in solitary confinement at Eyman state prison on Feb. 20, having literally drunk himself to death with water. Corrections officials listed his death as "accidental."

"His sodium deficiency was well documented," said Porter's sister, Elaine Faith.
"That he was allowed to go two, three days drinking that much water and they knew about it and didn't take him in because he needed IV therapy."

"I know nothing can bring my brother back, but prisoners deserve at least humane medical treatment," Faith said.

Kenneth Lucas, 65, died Oct. 4 at the Eyman state prison of a heart attack -- "natural causes," according to Corrections. But according to the same lawsuit that cites Dix's death, when Lucas collapsed in his housing unit the day before, other prisoners yelled to officers to contact medical staff but officers didn't take action.

Officers then took him to the medical unit, where an appointment was set for a few days later. He died before he could be seen by medical staff.

The inmate who had performed CPR on Lucas was disciplined for breaking a rule that prohibits inmates from performing medical procedures, according to the lawsuit.

A Corrections spokesman declined comment on the case, citing the litigation.
Donna Hamm, a former state judge and prisoner advocate, said incarceration is the punishment for prisoners, not inadequate health care. And Arizona has a constitutionally mandated obligation to provide adequate care to prisoners, she said.

"The delays are just incredible," she says. "I've advocated for people who've been diagnosed with a lump or growth and who are supposed to be biopsied and have to wait six months, eight months, extraordinary amounts of time before being diagnosed."

A class-action ACLU suit alleges that medical and mental-health care in Arizona's prison system is so inadequate as to be unconstitutional and demands improvements in access to and quality of care, and "timely and competent" emergency response.

By the end of June, Wexford Health Sources Inc. of Pittsburgh will assume responsibility for medical and mental-health care at Arizona's state prisons under a three-year, $349 million contract. Wexford's contract includes performance standards for inmate care, including deadlines for inmates to be seen following a request for care and guarantees that prescriptions will be filled within a specific time.

The Department has struggled in the past two years with a medical-staff vacancy rate consistently higher than 20 percent, among other problems. Corrections spending on medical care fell 27 percent from fiscal 2009 to 2011, to $111.3 million, or an average of $3,258 an inmate.

Critics, though, citing Wexford's mixed record elsewhere, are skeptical about whether it will improve care. Regardless, Daniel Pochoda, the ACLU's Arizona director, said the change in management won't alter the legal demands for improvements in the suit.

Michelle Lependorf, the sister of Ferdinand Dix, said that she hopes the lawsuit leads to improved care.

"The real Ferdinand was loving, charming, fun to be around and caring," she said. Because of poor medical care, "the person they turned him into was angry, in pain, suffering and mistreated. ... He should have had a chance to live. They gave him none."
Posted by Margaret Jean Plews at 1:52 PM