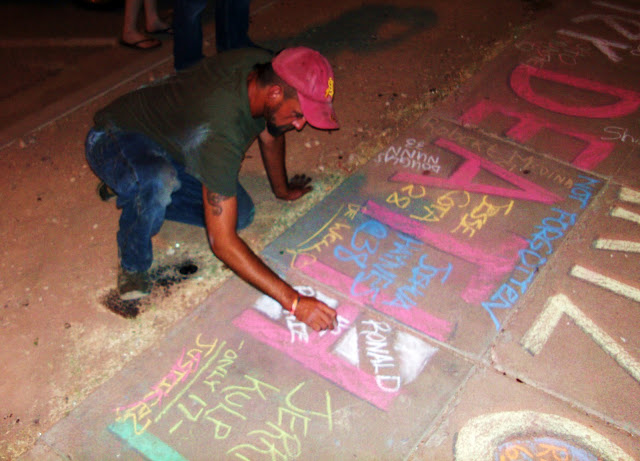 Community member Mike Shipley remembering victims of prison violence and despair at the opening of "Patriotic Descent", an art show on the exercise of political speech at the Firehouse Gallery in Phoenix (June 9, 2012)

The letter below was posted to the AZCentral website in the comments following the June 16 guest editorial in the AZ Republic by Steve Twist titled
"Arizona prisons humane, secure despite criticisms."


I am writing as an advocate and founder of David’s Hope, a nonprofit dedicated to promoting treatment rather than incarceration for all those with mental illness and addictions. It is extremely sad to see former deputy AG Steve Twist write his ridiculous opinion piece, published  June 16 in "My Turn", wherein he claims our Arizona state prisons to be both humane and secure.

Arizona has a long history of brutality in its prisons, being first at producing a supermax prison and choosing to incarcerate endless numbers of individuals with serious mental illness within its walls. As an advocate for those with mental illness, I receive frequent requests for help from the mentally ill and their families who are seeking to find just a glimpse of humanity from the administrators of our AZ state prisons. Instead they find themselves cast into the abyss of brutality under the reign of current ADOC administration. The current director has replaced rehabilitative policies with chemical gassing and attack dogs which are used frequently. Even those suffering from psychosis due to severe mental illness are not immune from the brutality, regularly being sent to long term isolation for refusing to obey commands of the officers in charge. Those with severe disorientation due to psychosis can be kept in isolation for years, without sunlight or fresh air, permanently cut off from contact with any other human being in any meaningful way.

You won't hear the DOC call their isolation policies solitary confinement. Officials sanitize the term calling it segregation and tell us only the most violent are sent there. I speak as an advocate in the state of AZ in behalf of those with mental disorders. I do not believe this correctional regime is forthright in their disclosures.  The ACLU of AZ filed a class action lawsuit in March of this year regarding the lack of medical and mental health care provided in ADOC. This lawsuit is a real Godsend to all those who want justice and decency to prevail in Arizona's prisons. The opportunities this lawsuit brings, give our state prisons their best chance of achieving lasting reforms, rehabilitation of offenders and successful reintegration of offenders back into our communities.

Our society will be judged by how we treat the least among us. Without adequate mental health care, our incarcerated mentally ill will return to us more ill and damaged than before we locked them up. How will this make our communities safer or save taxpayer dollars? All inmates in Arizona prisons should be treated humanely.

Over 95% of all inmates will return to our communities one day. I ask you to consider our state correctional policies and then decide.........What is it we will have taught them?

We want to express our deepest gratitude to investigative reporter Bob Ortega for shining the light of truth on the despicable lack of respect for human dignity, under which our present day DOC operates. You can find more info regarding our efforts to increase collaboration between Arizona's mental health and criminal justice systems at davidshopeaz.org


Mary Lou Brncik
Posted by Margaret Jean Plews at 6:51 AM