Only cowards attack individuals in gangs when they have no chance in hell of surviving, much less even fighting back - that term describes the three guys who went after Tyson. When it comes to successfully killing people, AZ prison gangs seem most concerned with weeding out members of their own race, too, not taking on other gangsters (they might get hurt doing that, so if you're threatened by a gang of a different race, don't go running to the one you think will help you just because they have the same skin color...you may be the first person they kill).

If you're heading to prison soon, don't make the mistake of thinking that these people or their organizations will "protect" anyone inside but themselves in the end. You're better off making one good unaffiliated friend to watch your back in prison than having the entire brotherhood "on your side", since no matter how much money you pay them or how enthusiastic a racist you may be, they'll turn on you and cut you to shreds in a heartbeat if you decide to be your own man.

I do fear their reach, by the way - I don't doubt that they can get to us out here, too. I just have less respect for prison gangs and their leaders than I do for scum-feeding cockroaches, and I think that needs to be said. They display no real driving ethics or values except for their own profits, and they only seem to know how to exploit hate, fear, greed and violence to attract and repel people with - like so many of our esteemed politicians in AZ do, actually. There's nothing brilliant or admirable about climbing to the top of that heap, either in prison or in the legislature; it's a power structure built entirely on BS, which decomposes and collapses much faster than Truth ever will.

To Tyson's family: We're organizing other family members of prisoners and former prisoners to fight this kind of thing, if you want to connect- assaults under the current administration have tripled, and the homicides have doubled, with no relief in sight. Prisoners are people, too, after all, and deserve better than what Tyson got. Contact me (Peggy) at 480-580-6807 or arizonaprisonwatch@gmail.com if you're interested in doing something about AZ prison violence. Let me know even if you just need support and have nothing to give right now; there are people here for you. 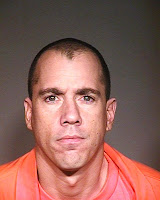 
The family of an inmate left severely brain-damaged after a prison beating in November says a correctional officer was complicit in the assault. This week, they filed a notice seeking $12 million to settle their claims against Arizona's Department of Corrections.

Tyson White, 37, arrived Nov. 18 at the Lewis state prison in Buckeye. Eight days later, he was assaulted by three inmates who threw him to the ground and repeatedly kicked and stomped on his head and neck.

The three were members of a prison gang, the Aryan Brotherhood, according to Corrections reports obtained by the family's attorney, Scott Zillinger, through a lawsuit against the department.

White apparently had sought the gang's protection, claiming affiliation with the gang during a prior prison stint. According to department reports, the gang members asked an inmate who served as a "porter," or clerk, for Corrections Officer Doreen Neu to check White's claims.

According to Corrections investigators, Neu accessed White's computer records on Nov. 22, which showed that he was not affiliated with any prison gangs. Four days later, White was assaulted by the gang.

Corrections officials declined to comment on the allegations or to say whether Neu received any disciplinary sanctions. In their report, Corrections investigators note allegations that Neu's porter regularly supplied information from confidential state records to other inmates. It would be a criminal offense for Neu to allow any inmate to view another inmate's records. Neu could not be reached for comment.

White has been in treatment at St. Joseph's Hospital since the assault, with permanent brain damage that leaves him unable to walk, use the bathroom or take care of basic needs without assistance. He was serving a two-year sentence for aggravated DUI.

The attack on White was one of 62 inmate-on-inmate assaults reported by Corrections that month. There were 34 incidents of inmates assaulting staff in November.
Posted by Margaret Jean Plews at 8:09 PM