Ortega: Why so many prisoners dead? 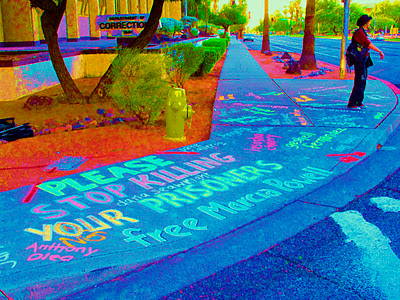 
I disagree with Carl on this one - I think omitting witnesses, etc from suspicious death reports - that is, them "selectively" - does constitute falsification of a public record, which is a class 6 felony. I've read enough of the ADC's death records, and talked to enough family members and corrections officers, to be convinced that such damage control is itself criminal activity, and should be treated as such.

DOC fails to list cause of death in 28 cases.

The Arizona Department of Corrections listed no cause of death for 28 inmates who died during the past two years, stating only that the deaths were under investigation. No further information has been released.

In response to public-information requests submitted by The Arizona Republic seeking information about 36 inmate deaths, Corrections provided records for 10 cases. Those records often lack details such as how much time passed before medical responders were summoned and when they arrived to aid a prisoner.

Interviews with families, inmates and prison staff and records from county medical examiners and other sources yielded information about all but eight of the 36 inmate deaths. But Corrections officials have not released any information on those eight deaths, which include four that have been "under investigation" for more than 18 months.

In Arizona, correctional-death investigations are handled internally rather than by a police agency, as occurs in some states. The shift supervisor writes a draft report, which must be approved by administrators in the central office before it's published. The department's Office of the Inspector General assigns an investigator.

"The cleanup starts the moment the incident is reported: eliminating flag words, eliminating individuals who may be relevant to the situation, cut back the witness list," says Carl ToersBijns, a retired deputy warden who served at Eyman state prison. He emphasized that he doesn't believe reports are falsified but are written selectively.

"By the time it's finalized, the incident report is so clean and sterile you won't know what happened because it's already been filtered. The direction is given ... was it deliberate, accidental, suicide, homicide? They try to fix and create a summary for that report that they can defend," he says. "There's a couple of reports where the investigator had doubts and it was overwritten. A lot of drug overdoses are suicides; a lot of 'natural deaths' are people who have been suffering medical conditions but finally just expired. It's not reflected on those reports and never will be reflected in the news reports. Only the ones who were there know what happened."