A million hearts just shattered: the execution of Troy Davis. 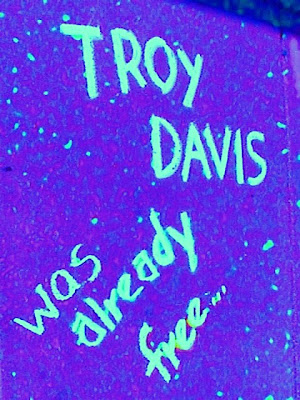 Troy Davis was murdered tonight by the state of Georgia and the US Supreme Court,

and a million hearts were shattered.

Blessings to his family, who lost the most. We will not give up this fight.

The Death of Troy Davis

The Georgia execution, carried out amid so many reasonable doubts, marks a watershed in America's grim experiment with capital punishment

In a perfect world, the execution of Troy Davis Wednesday tonight in Georgia would herald a new era in America's grim history with the death penalty. It would shake the criminal justice system out of its self-satisfied torpor and force government and the governed both to face the ugly truth about capital punishment in the United States in the twenty-first century. It would propel this question to the forefront both of the nation's political debate and the Supreme Court's docket: How many exceptions to the rule must we allow or tolerate, how many legitimate questions must linger beyond the death chamber, before we either fix the system or end the experiment?

When the state kills those whose guilt is in serious doubt, or when the state kills those to whom it has not given fair justice, it doesn't just perform an injustice upon the individual, the rule of law, and the Constitution. It also undermines the very legitimacy of the death penalty itself, for its continuing use as a sentencing option derives its civic and moral strength mostly from the fiction that it can be, and is, credibly and reliably imposed. Once our confidence in that credibility is shattered, as it should be now that Davis is gone, all that's left of the death penalty is state-sponsored retribution and the hangman's noose.

In a perfect world, the haunting execution of Troy Davis would spawn vital reforms to the clemency and parole process in states like Georgia and Texas, where such proceedings routinely make a mockery of the idea of reasoned justice. It would light a fire under local prosecutors to ensure that witnesses in capital cases are not coerced by law enforcement officials. It would cause jurors to think twice about rushing to judgments. It would force a supine Congress to reevaluate its so-called "effective death penalty" statute, which neuters legitimate post-conviction appeals. And it would at long last shame state court judges to cast off the yoke of their campaign contributors, who push them to be "tough on crime" at the expense of fealty to the Bill of Rights.

Georgia says that it has given Davis more due process than any single man would have a right to expect. Up the state appellate ladder and down again. Up to the Supreme Court and back. Hearing upon hearing. Brief upon brief. At some point, Georgia says, there has to be finality in capital cases. At some point, the justice system has to accept the work of judges and juries and impose the sentence that was initially given. There is truth to all of this. And there is both rhyme and reason to many of the rules which govern appellate law and practice in capital cases. But those rules almost always place the state's interest in finality ahead of the condemned's interest in accuracy. "Enough is enough" is a great campaign slogan -- but it's hardly a worthy motto for a civilized nation's death penalty scheme.

Here's what Davis was up against, to cite just one example. Last summer, at the request of the United States Supreme Court, U.S. District Judge William Moore held an evidentiary hearing to examine the new claims, and new evidence, presented by Davis and his attorneys. Under federal law, Judge Moore reminded the litigants and the world, Davis had the nearly insurmountable post-conviction burden of establishing by "clear and convincing evidence'' that no reasonable juror would have convicted him based upon the new evidence. Applying that standard, which flips on its head the standard applied at trial, Judge Moore unsurprisingly held that Davis had failed to meet his burden.

In a perfect world, Davis would have had his new evidence evaluated under a legal standard more tuned to ensuring the reliability and accuracy of his conviction rather than upon the timing of his execution. His case wouldn't have been shoved like so many of the rest down a sterile and formalistic legal hole forced upon the federal courts by the Clinton-era Congress. And, even if it somehow were, even if the justice system failed, Davis would have had a parole board willing to acknowledge what seems so self-evident; that an uncertain death sentence harms more than just the executed.

Last week, in an op-ed which appeared in the Atlanta Journal-Constitution, William Sessions, the former federal judge and FBI director, and a man not known for willy-nilly considerations, once again called upon Georgia to halt Davis' execution. His view of the 2010 hearing is the most accurate view I've read yet and is quite chilling. Judge Sessions wrote:

What the hearing demonstrated most conclusively was that the evidence in this case -- consisting almost entirely of conflicting stories, testimonies and statements -- is inadequate to the task of convincingly establishing either Davis' guilt or his innocence. Without DNA or other forms of physical or scientific evidence that can be objectively measured and tested, it is possible that doubts about guilt in this case will never be resolved.

Alas, the world, and the world of capital punishment in America, are far from perfect. When Georgia executed Troy Davis, despite the grave doubts cast upon his capital conviction, it wasn't just thumbing its nose at the new evidence which tends to exonerate him. It wasn't just ignoring the considered judgments of experts in criminal justice and capital cases. It wasn't just winking and nodding at the protections of the "cruel and unusual" clause of the Eighth Amendment. It was instead declaring war on all of that. It was proudly proclaiming its infidelity to a fundamental premise of American law -- that the courts, and the state, will always try their best to get things right no matter how long it takes.

Now that's he gone from the face of the earth, and whether he was guilty or not, Troy Davis will leave one of two legacies. Either his story will fade with time, as have the stories of so many other men executed under a cloud of questions about their guilt, or his story will propel meaningful change in this area of the law. His many supporters, in and out of public life, hold in their hands the ability to determine that legacy. What they could not accomplish during his lifetime they may still try to accomplish in his death; a renewed appreciation for the notion that no man, neither the high nor the low, neither the rich nor the poor, neither white nor black, deserves the lamentable injustice done this day.

This article available online at: