America the executioner: lynching, racism and the death penalty.

Troy's stay was denied
and he was executed tonight. 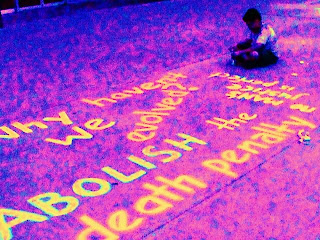 This seemed an appropriate article, since an African American prisoner's bid for clemency in Georgia was denied today, and he's scheduled to be executed tomorrow in front of a world of witnesses who begged for his pardon. Hit this page to learn more about Troy Davis and to advocate for true justice for both him and the white police officer he was charged with killing. His conviction was based solely on recanted testimony from witnesses who report they had been coerced and the testimony of the man others identified as the real killer (who they couldn't even get an indictment against now if they tried, after all the doubt Troy's wrongful conviction would give him - boy is he laughing at all the cops now). I guess to some folks and most states in this country, one more black man dead is as good as another - they're all interchangeable when it comes to lynchings and executions. It still teaches the rest of us the same thing: Resistance is futile (which I assert that it is not).

The small question of reasonable doubt and innocence are irrelevant, though, when those with power and privilege stand to lose a bit of one or both if our minorities get too uppity, it seems. Besides, we all know that black men (and mothers of color, for that matter) are all guilty of something anyway, they just haven't all been booked yet - right? We need to go slow and throw in a few whites for the masses to choke it all down and call it a just democracy - I think that's largely how we ended up with a black man as president (the whites and Republicans also didn't want to take the blame for the mess Bush left behind).

We're still working on keeping folks down, without a doubt, so don't worry, dear privileged few. Arizona's so scared of people of color here becoming a voting majority that we're anxiously building 5000 more for-profit prison beds to accommodate the laws ALEC is crafting in order to disenfranchise and disempower the black and brown and Indigenous among us.

On top of that, for his part, Obama seems to be as bad as George Bush - if not worse - when it comes to exploiting our instruments of justice, turning them into even more devastating tools of oppression than ever before. All this madness, of course, is in the service of our capitalist, racist, brutal economy, which clearly still needs live sacrifices to feed on, and raw fear to keep us bound without chains. Fortunately, we each possess our own keys to freedom - so long as we can evolve. We'll know we've finally made real progress when we finally retire the executioners once and for all.

DEATH SENTENCES LINKED TO HISTORY OF LYNCHING IN STATES

COLUMBUS , Ohio - States that sentence the most criminals to death also tend to be the states that had the most lynchings in the past, a new study suggests.

Researchers found that the number of death sentences for all criminals, Black and white, were higher in states with a history of lynchings. But the link was even stronger when only Black death sentences were analyzed.

The results may be shocking to many people, but they aren't surprising to sociologists who study the racial aspects of the death penalty, said David Jacobs, co-author of the study and professor of sociology at Ohio State University .

Our results suggest that the death penalty has become a sort of legal replacement for the lynchings in the past, Jacobs said. This hasn't been done overtly, and probably no one has consciously made such a decision. But the results show a clear connection.

Another study finding reinforces this idea. Results showed that the number of death sentences in states with the most lynchings increased as the state's population of African Americans grew larger, at least to a certain point. The researchers believe that is because, as their numbers increase, Blacks are seen by the white majority as a growing threat.

Jacobs conducted the study with Jason Carmichael, a graduate student at Ohio State, and Stephanie Kent, assistant professor of sociology at the University of Nevada, Las Vegas. Their results were published in the most recent issue of the American Sociological Review.

For the study, the researchers examined the number of death sentences handed down in each of the mainland 48 states in 1971-72, 1981-82 and 1991-92. They computed lynching rates with data on state lynchings from 1889 to 1931 provided by the National Association for the Advancement of Colored People.

In their analysis, the researchers used a widely accepted statistical technique that allowed them to take into account the fact that the death penalty is not legal in all states and, even where it is legal, it is not always used.

They also took into account a wide variety of factors that also affect the number of death sentences given in a state, such as the overall crime and murder rates, unemployment rates, and fundamentalist church memberships.

To confirm their findings, the researchers repeated their analyses using a separate, and perhaps more reliable, data set on the number of lynchings that occurred in 10 Southern states.

In both cases, the findings showed a clear link between the number of lynchings, the proportions of African Americans in the states, and the number of death sentences.

* We found that violent acts in the distant past still seemed to be linked to current legal decisions about who will live and who will die, Jacobs said.

Why do the number of death sentences increase for white criminals as well as Blacks in states with a history of lynching?

* Probably at that point, Blacks have enough votes and political influence within states to reduce the number of death sentences, Jacobs said.

The results of the study suggest that the United States is still a product of its past, Jacobs said.

Historical events continue to influence the current behavior of important social institutions. But the main point is that our findings do not support claims that the death penalty is administered in a color-blind fashion.