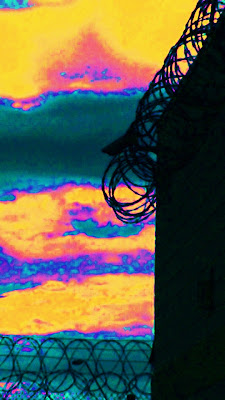 Thanks to Donna Hamm at Middle Ground Prison Reform for taking on this fight...

For the Arizona Department of Corrections, crime has finally started to pay.

New legislation allows the department to impose a $25 fee on adults who wish to visit inmates at any of the 15 prison complexes that house state prisoners. The one-time “background check fee” for visitors, believed to be the first of its kind in the nation, has angered prisoner advocacy groups and family members of inmates, who in many cases already shoulder the expense of traveling long distances to the remote areas where many prisons are located.

David C. Fathi, director of the National Prison Project of the American Civil Liberties Union, called the fee “mind-boggling” and said that while it was ostensibly intended to help the state — the money will be used to repair and maintain the prisons — it could ultimately have a negative effect on public safety.

“We know that one of the best things you can do if you want people to go straight and lead a law-abiding life when they get out of prison is to continue family contact while they’re in prison,” he said. “Talk about penny-wise and pound-foolish.”

One woman, whose brother is a prisoner at the Eyman complex in Florence, said that most of her family lives out of state, so the fee is an additional burden on top of the travel costs.

“What will happen is that people will just stop visiting,” said the woman, adding that most prisoners “live for” visits from relatives. Because some friends of the family still do not know of her brother’s incarceration, she asked to be identified only by her first name, Shauna. She was one of several dozen family members of inmates who complained to Middle Ground Prison Reform, a group based in Tempe, about the fee.

In a lawsuit filed last month against the Corrections Department, Middle Ground said the fee was simply a pretext for raising money “for general public purposes” and as such was unconstitutional because it amounted to a special tax on a single group.

Middle Ground has also filed suit over another provision of the law, which imposes a 1 percent charge on deposits made to a prisoner’s spending account.

“This was a scheme — in my mind, a harebrained scheme — to try to come up with the money,” she said.

Wendy Baldo, chief of staff for the Arizona Senate, confirmed that the fees were intended to help make up the $1.6 billion deficit the state faced at the beginning of the year.

“We were trying to cut the budget and think of ways that could help get some services for the Department of Corrections,” Ms. Baldo said. She added that the department “needed about $150 million in building renewal and maintenance and prior to this year, it just wasn’t getting done and it wasn’t a safe environment for the people who were in prison and certainly for the people who worked there.”

Ms. Baldo said the money would not actually pay for background checks but would go into a fund for maintenance and repairs to the prisons.

Barrett Marson, a spokesman for the Corrections Department, said in an e-mail that it was the department’s policy not to comment on pending litigation.

Although there have been some calls and letters from potential visitors inquiring about the fee and how to pay it, no complaints had been reported from inmates, Mr. Marson said. The department has not determined whether the number of visitors to the prisons has changed since the charge went into effect, he added.

“Maintenance funds for our buildings are scarce in this difficult economic time,” he said. “A $25 visitation fee helps to ensure our prisons remain safe environments for staff, inmates and visitors.”

Ms. Hamm, the Middle Ground director who is also a retired lower court judge and married to a former inmate, said that an earlier proposal presented to a legislative committee would have imposed the background check fee on everyone who visited inmates, including babies and children. But in the end, the Legislature limited the fees to people over 18.

The law also allows the Corrections Department to waive all or part of the background check fee in certain circumstances — for example, when an applicant just wants permission to telephone an inmate.

Ms. Hamm said that research by her organization could not find any other example of a state prison system imposing a fee on visitors.

The Arizona Corrections Department, Ms. Hamm said, has run perfunctory checks on visitors for years. In its application form, the department requires visitors to provide their name, date of birth and a driver’s license or other photo identification number. Providing a Social Security number on the application is optional, and no fingerprints are required.

Another state agency, the Department of Public Safety, conducts free background checks for people who want to review their own records and who provide fingerprints, said Carrick Cook, a spokesman.

The Public Safety Department charges $20 for criminal background checks of people who are hired as volunteers for state agencies, and $24 for checks on paid state workers, both of which involve fingerprinting. A fingerprint clearance card, required for child care and foster care workers in Arizona, costs $65 for volunteers and $69 for paid employees.

Shauna, whose brother is at the Eyman complex, said she learned about the fee after she filed applications for her brother’s son, a Mormon missionary in Kentucky who wanted to visit his father, along with a friend and two other relatives.

She was told that the best way to pay the fee was electronically, through Western Union, but was unable to get the system to work, she said.

She was then advised to send a money order. Despite confirmation by United Parcel Service that the package had been delivered, the Corrections Department told her that the $100 payment — four $25 money orders for four visitors — had not been received, she said.

Another $100 payment was sent, and on Friday — months after she began the application process — she finally got confirmation of the payment from the department.

“I have now spent $200 of my own money to get family in,” she said, adding that it could take up to 60 days for the department to approve the applications.

Posted by Margaret Jean Plews at 11:13 AM