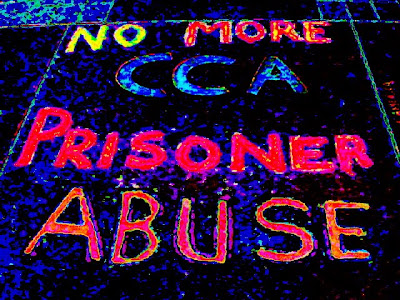 BOISE, Idaho (AP) — A potential class-action lawsuit against the nation's largest private prison company over allegations of violence at the Idaho Correctional Center has been settled in federal court.

The agreement between the inmates and Nashville, Tenn.-based Corrections Corporation of America was filed Tuesday in U.S. District Court in Boise.

In it, CCA doesn't acknowledge the allegations but agrees to increase staffing, investigate all assaults and make other sweeping changes at the lockup south of Boise. If the company fails to make the changes, the inmates can ask the courts to force CCA to comply.

The inmates, represented by the American Civil Liberties Union, sued last year on behalf of everyone incarcerated at the CCA-run state prison. They said the prison was so violent it was dubbed "Gladiator School," and that guards used inmate-on-inmate violence as a management tool and then denied prisoners medical care as a way to cover up the assaults.

CCA has denied all the allegations as part of the settlement, but the agreement is governed under a section of the Prison Litigation Reform Act which only applies in cases in which prisoners' constitutional rights have been violated.

As part of a prepared statement written by the ACLU and approved by CCA, both sides said that rather spending time and resources trying to litigate allegations of past problems, the groups would work toward improving future conditions at the prison. Those steps include hiring three additional correctional officers, ensuring prison staffing meets state requirements and following standard operating procedures already set up by the Idaho Department of Correction.

The agreement came after both sides spent three days in federal mediation sessions last week. Federal oversight of the settlement will last for two years.

In the lawsuit, the inmates cited an Associated Press investigation that found the private prison had more cases of inmate-on-inmate violence than all other Idaho prisons combined.

"The unnecessary carnage and suffering that has resulted is shameful and inexcusable," the ACLU wrote in the lawsuit. "ICC not only condones prisoner violence, the entrenched culture of ICC promotes, facilitates, and encourages it."

While the prison is owned by the state, it is run for a profit by CCA under a contract with the Idaho Department of Correction. The inmates claimed the company made decisions based on profit rather than on "responsible administration of the prison."

The prisoners' lawsuit didn't ask for money, just changes in the way CCA runs the lockup.

Under the settlement, the company has agreed to leave more prison beds open so it can easily move threatened inmates to new cellblocks when necessary. It also agreed to report all assaults that appear to amount to aggravated battery to the Ada County sheriff's office, to increase the level of training given to guards and to discipline staffers who don't take appropriate measures to stop or prevent assaults.

"This settlement is in the best interest of our clients, CCA and the state of Idaho," ACLU senior attorney Stephen Pevar said in the prepared statement.

Idaho Department of Correction Director Brent Reinke said he was pleased with the settlement, because he thinks it will improve the sometimes adversarial relationship the state has had with CCA. Idaho has increased the number of employees it has monitoring operations at the private prison and in the past has fined CCA thousands of dollars for failing to meet contract requirements. Still, Idaho officials decided to renew CCA's contract to run the prison and the state has even added more than 600 beds to the lockup, making it the state's largest prison.

Reinke said he was also pleased that ICC warden Timothy Wengler was one of the CCA officials who signed the settlement agreement.

"I respect those in Tennessee (CCA's headquarters). But I really want to have a good manager here," Reinke said. "The fact that he's stepping up and has signed the agreement, well, his name is on the line now."

The Department of Correction was originally named as a defendant in the case, but the inmates agreed to drop the allegations against the agency after state officials agreed to enforce any of the court's actions.

Idaho officials will closely review the 18 key items listed in the settlement to make sure they comply with the contract between CCA and the state, Reinke said. If not, the contract may be adjusted to add the requirements.

CCA spokesman Steve Owen said his company is "turning a page and looking forward" and the settlement reflects "how pleased we are with the progress that's been made at the facility."

Any costs associated with the increased staffing, investigations and training aren't a concern, he said.

"I think we view all those things that are being done as positives," he said.

CCA has faced several lawsuits in Idaho over violence and assaults at the prison. Security cameras from the facility showed one attack, in which guards watched while an inmate named Hanni Elabed was beaten unconscious and then stomped in the head multiple times. The company reached an undisclosed settlement with Elabed, who was left with brain damage and likely permanent disabilities from the attack.

Many of the attacks listed in the ACLU lawsuit happened while former warden Phillip Valdez was leading the prison. CCA eventually reassigned Valdez to the assistant warden post at the Leavenworth Detention Center, a prison the company runs for the U.S. Marshals Service in Kansas.

Just last week, CCA reached a settlement with an inmate named Marlin Riggs, who was the lead plaintiff in the potential class-action lawsuit in Idaho until the court split the case into two lawsuits. He contended he warned guards that he was about to be attacked by other inmates but they refused to move to him to another unit or give him any other protection. Shortly after returning to his cellblock, Riggs was beaten so badly that bones in his face were broken and his blood was splattered across the walls and ceiling of his cell.

CCA's settlement with Riggs was sealed by the court.

Posted by Margaret Jean Plews at 7:05 AM