ASPC-Douglas: Where some cops are crooks...

Some readers today may be aware that I correspond with a lot of prisoners seeking help asserting their rights, primarily those for health care and safety. For several reasons of late, I started asking them to tell me who the "good guys" are at the AZ DOC, so I'm now running a list of who’s been nice, in addition to the long one I have of who’s been naughty. I have a few good people already - but since I have a few targets on my own back posting their names here may hurt them, so I'll have to figure out another way to recognize them.

In any case, for those officers who go out of your way to be kind and professional to those the rest of us have thrown away - thank you. I know these three people below don't represent all of you - nor do the other criminals at DOC who get attention.

That said, these accusations are probably just the tip of an iceberg, but money-laundering still isn't the kind of stuff that really bothers me about illicit DOC employee conduct.  There's far more serious collusion with narcotics traffickers  and other criminal activity going on at the AZ DOC behind bars than a "Financial Crimes Task Force" would suggest.

For example, I hear at least once a week from a prisoner whose safety has been compromised by DOC officers in the apparent service of the gangs, or who was assaulted by the guards themselves, or who witnessed horrendous abuse or neglect result in harm to another. That's the kind of criminal stuff I wish the media would really look into.

It's also the kind of thing truly conscientious DOC officers should be more empowered to take into your own hands. I know it could get some of you demoted or fired to do so in some cases - or even hurt or killed. I also respect that some people feel they have no choice but silence, thinking that the only alternative is to be labeled a "snitch" or a traitor.

I've been told that some folks think I'm in league with or coddle criminals, but I'm actually pretty hard on them, and they aren't all my "brothers" or “comrades” - hell, some are the perpetrators of the violence I seek to end. I define my allies and friends by their values and character, not by whether or not they all dress like me. I'm also alert to imposters, though - which is perhaps how you might want to regard those who violate the basic ethics of your profession . That would make them the traitors, not you.

Don't get me wrong: I wouldn't call the cops on a comrade, myself - but I'd sure as hell hold their feet to the fire if I knew they were running around hurting people while masquerading as someone truly concerned about justice and liberation. That would make me really consider their worth as a "comrade", and I'd likely make a break with them - leaving them if they don't leave me. I definitely wouldn't make them comfortable in my company, and I might encourage my community to shame them as well. We would not be rallying around them to prevent their victims from confronting them with the truth, either.

I have little tolerance for so-called codes that exist primarily to enable abusers, like those between cops - and those between gang members, too.  That's how the bad guys keep moving up to the top, so that now both the prisons and the criminal enterprises dominating most of the yards are being run by the meanest thugs, not the best administrators.

As I tell the prisoners, only you can gauge what you can afford to risk or lose in challenging any of them, though, because the danger of retaliatory violence is real. Just know that allowing the real bad guys to wear that uniform and then expect you to cover for them when they cheat, abuse people, steal, and so on, reflects poorly on even the best of you.

Still, there are things you can do other than turn away or turn them into your even more corrupt superiors...like telling me about it. It always gives the perpetrators of abuse pause to know they are being witnessed, even if they aren't publicly identified. I'm not just looking for bad cops to bust, though - there's always a bigger picture, and often individual staff get thrown under the bus to obscure what that is. I want to know what's wrong with the system, from your point of view.

Chuck Ryan has 10,000 employees, and I hardly ever hear from any to say: "We wouldn't have all stood by and watched Tony die", or "It wasn't that one officer's fault! There's something bigger here!". But you are watchers of Arizona's prisons, too, and some of you have among the most intimate inside views, which no one out here hears much of.  I know the DOC goes out of its way to silence the most ethical among you...that's still who I'm hoping to hear from now.

Help me get at the underlying reasons for what you think is wrong at the DOC, and how to resolve them..or just write to tell me you think I'm full of it. Snail your thoughts to my PO box anonymously to be safest, unless you are making accusations about an individual you want me to act on somehow - even prisoners can't levy charges against you all to me anonymously.

I won't promise what I will and won't publish, but if you're reasonable and coherent and give me your permission, I'd like to print some of your letters; those won't require your real name to be public, just for me to verify who you are. 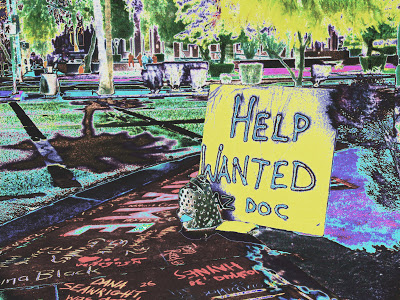 Investigators from the Arizona Financial Crimes Task Force identified a new money laundering trend occurring along the southwest border where criminal organizations, associated with drug cartel members, were recruiting people to use their personal U.S. bank accounts to funnel illegal proceeds from the United States into Mexico.

During the course of the investigation five DOC employees were identified as being involved in this type of money laundering activity, which is in violation of both federal and state money laundering laws.

No additional information was provided at this time by the Arizona Department of Corrections Media Relations Administrator.

This criminal investigation is ongoing and there have been no arrests or charges filed at this time, Lt. Piano said in press release from his office.