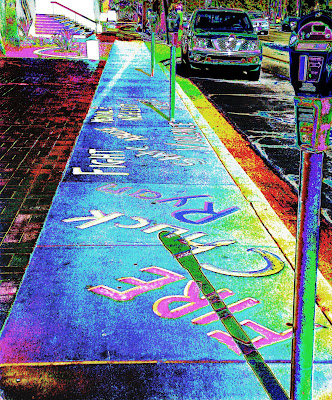 There are many reasons the AZ House minority leader has called for DOC director Chuck Ryan's resignation - the escalating violence under his watch is one. AFSC-Tucson is also calling for more oversight. Gangs run the yards, drugs are rampant, the prisons are erupting in race riots, and there's a class action suit for gross medical negligence in the prisons and abuse of the mentally ill with isolation (where they have been killing themselves at twice the rate in other states).

AZ DOC officers should join others concerned about prison violence, staffing morale, etc and fight back - call for Chuck Ryan to resign, and a competent administrator to be appointed. The union issued a vote of no confidence and called for Brewer to sack him once before - what's changed since then, except a few more people are hurt and dead?

By Allyson Blair / By Steve Stout

The long-time boyfriend of a female corrections officer at the Arizona State Prison Complex in Winslow said she was brutally attacked by two prisoners while escorting more than 50 unrestrained inmates by herself.

The officer, identified only as Officer Benavidez, is hospitalized after recently undergoing facial reconstructive surgery after the attack.

Benavidez's boyfriend of 20 years, Bill, only wanted to tell us his first name for fear of retaliation. He said there is no doubt in his mind the two men who attacked her were trying to kill her.

"Officers found a hit list in there with her and four other people's names on it," Bill said.

Bill told CBS 5 News on Friday a phone, as well as drugs, were confiscated from an inmate on a tip that came from Benavidez, a six-year law enforcement veteran.

"The first one hit her and knocked her out. He climbed on top of her and continued to pound her head.
There was another one, and he started kicking her," Bill said.

DOC officials said there were more than 160 security staff assigned to the Kaibab Unit of the prison Friday night, but Bill said that number is misleading.

"There may have been 160 spread out in the entire prison guarding the fence or whatever. But there were 19 officers in her unit," Bill said.

Bill said understaffing isn't the only problem officers face. Drug use is rampant.

"We're not talking about simple stuff. It's heroin. It's a killer itself being fed to killers," Bill said.

Bill told CBS 5 News that state officials have kept problems like this under wraps for too long.

"I want stuff in that prison changed, before someone else is standing here like this," Bill said.

A Department of Corrections spokesman confirmed the case is under investigation, but wouldn't go into specifics about the attack...
Posted by Margaret Jean Plews at 2:09 PM