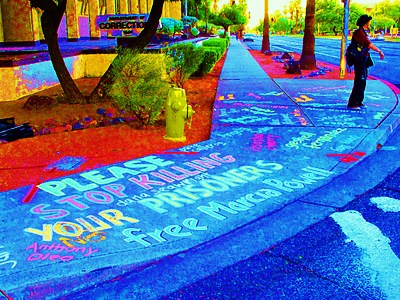 I don't necessarily expect Jan Brewer to care what the House Democrats think or to fire Good Old Boy Chuck Ryan, but the rest of the legislature should really be looking seriously at how badly he's mismanaged the AZ DOC - that's a billion dollars a year of state money he handles, after all - not to mention the public trust.

of course, this isn't the first time anyone has questioned Chuck Ryan's leadership....

Still, the governor should care as well, though, since these are all her ghosts.. 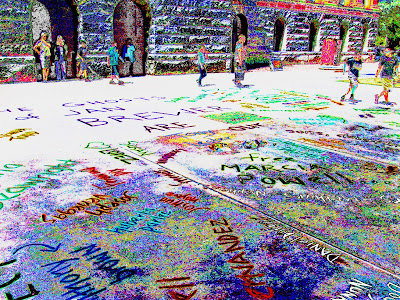 The Ghosts of Jan Brewer
AZ State Capitol, Phoenix (April 3, 2013)
and don't forget all the race riots and other disturbances, not mentioned below...

In any case, this is the day - the whole week - that the families of prisoners should be contacting their legislators, and the legislators responsible for the prisons your loved ones are in. Watch KPNX / CHannel 12 PHX tonight at 6 and 10pm. Then tomorrow please contact your legislators or those of the prison your loved one is in tomorrow with your own story. Forward that email to KPNX CH 12 news at connect@ad.gannett.com with your thank you to them for their coverage.

If you don't mind forwarding a copy to me as well, I'm at arizonaprisonwatch@gmail.com

Find your own AZ legislators here.

“Director Ryan has exhibited a pattern of mismanagement and a lack of leadership resulting in an unsafe corrections system in our state,” Campbell said. “Under his direction, our corrections system has wasted tax dollars, jeopardized people’s lives and damaged the state’s credibility.”

Campbell’s action follows the recent death of an inmate in a Buckeye prison.  Suicide and homicide rates occurring within Arizona prisons have earned the facilities negative attention in the past.

“We’ve seen reports that Arizona’s prison suicide rate was 60 percent higher than the national average between the years of 2010 and 2012,” Campbell said. “In addition to this, the attempt to cover up what happened to an inmate allowed to bleed to death in front of prison guards is a gruesome consequence of Ryan’s negligence.”

Campbell said he believes Ryan has failed to properly supervise private prison contracts. He points to the inmate escape from Kingman as an example.

“In 2010, three inmates convicted of violent crimes including murder and armed robbery, escaped a privately operated state prison in Kingman,” Campbell said. “Following this incident, Ryan admitted that the DOC didn’t properly monitor this facility. This is a community safety issue.”

Campbell said private prisons cost more than state-run prisons and that the DOC has failed to hold the private prison companies accountable for the terms of their contracts with the state. He also said the state awards contracts in a manner that is not transparent and seems indicative of cronyism. An example of this occurred earlier this year, when the DOC terminated a contract with Wexford Health Sources, a private company that provided healthcare for inmates statewide.

“The Department of Corrections contracted with a company that has a controversial record of service. In fact, one of Wexford’s employees exposed more than 100 people to hepatitis C in a prison in Buckeye,” Campbell said. “The DOC terminates that contract and replaces Wexford with Corizon, another company surrounded by controversy that also happens to have ties to people who are close to the governor. This situation reeks of patronage.”

“We are wasting taxpayer money on mismanaged facilities,” Campbell said. “That is especially true with the for-profit, private prisons. They are not saving the state money.”

Last year, Republicans repealed a state law in the budget requiring a comparison of state and private prisons every two years to ensure that private prisons were providing the same quality of services as state prisons at a lower cost. Department of Corrections Per Capita Cost Reports compiled over five years consistently show that the state is losing money on private prisons, and security audits show serious safety flaws in all of Arizona’s for-profit prisons, including malfunctioning cameras and alarm systems.

“For years, Ryan has showed that he is incapable of properly handling his position. Arizonans deserve better. He should resign immediately,” Campbell said.

1.       Security failures. A recent audit by the State Auditor General found disturbing security violations at state prisons, including broken perimeter alarm systems that staff ignored and a failure to keep an inventory of keys.

2.       Personnel problems.  News reports have indicated that there is low morale at state prisons and that employee turnover is very high. The Arizona Correctional Peace Officers Association submitted a letter of “no confidence” regarding Director Charles Ryan.

3.       Criminal behavior.  The Arizona Department of Corrections Inspector General has documented hundreds of acts of criminal conduct by DOC employees, including DUI and domestic violence.

4.       Pattern of mismanagement and lack of leadership. One examples of mismanagement is the awarding of the medical care contract to Wexford, then rescinding that contract and re-awarding it to Corizon. Both companies have faced controversy and accusations of poor medical services.

5.       Conflict of interest.  The Department of Corrections has close ties to the private prison industry as well as private health care providers.  One example is Chuck Coughlin’s relationship with Corrections Corporation of America (CCA), which has a contract with the state to provide private prisons. Coughlin has a well-known relationship with the governor, who appointed Director Ryan to his position. Another example is Director Ryan’s ties to Terry Stewart who works with Advanced Correctional Management, which lobbies for private prison expansion, as well as Stewart’s work with Corizon, which was eventually awarded the statewide contract to provide health care to inmates.

7.       Poor medical care. Inmate medical care has been severely neglected. Egregious examples of inmates being given grossly inadequate health care have been outlined in the class action lawsuit against DOC.

Posted by Margaret Jean Plews at 11:26 AM