The following photo is from the Veterans Day parade in Phoenix, where Maricopa County Sheriff Joe Arpaio rolled out his biggest toy to honor our dead soldiers. I stopped to leave him a message for one dead Army veteran he should be especially mindful of: Marty Atencio. That man should be held criminally liable for the death of his prisoners given the dehumanizing treatment he encourages and the culture of contempt he's cultivated among his officers.

The chalk is mine, but I can't take the credit for the shot: Lisa Blank took it, and it's all over Arizona Community Press's Community Free Press Facebook page. Thank you Lisa! 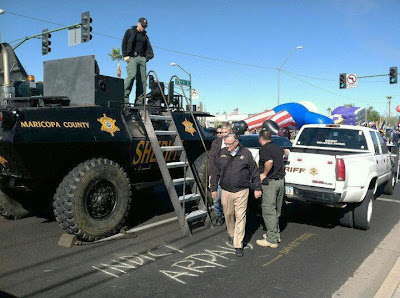 
Thanks to Stephen Lemons at the Phoenix New Times for this series about Marty's brutal killing by Phoenix Police and Joe Arpaio's deputies at the 4th Avenue Jail last year...

Atencio, who suffered from mental illness, was off his meds and wandering the streets in a daze on December 15, when he was picked up by Phoenix cops, allegedly because he had frightened a woman with his bizarre behavior.

That woman later stated that she'd hoped Atencio, 44, would receive the help he needed if he was in custody.

Instead, he received a one-way ticket to a military funeral.

Though Atencio was processed first without incident at the Phoenix Police Department's southern command station, his experience later in Fourth Avenue would be brief, humiliating and fatal.

There, Atencio was taunted and made fun of by MCSO detention officers, as is recounted in the suit:

After going through the medical screening, Marty was taken to have his mug shot
taken. While Marty was having his mug shot taken, the D.O.s were taunting him, asking him to "clown" for them, telling him to "turn left," "turn right," and making fun of Marty's
inability to follow instructions.

As the guards made fun of Marty, they told him to make funny faces and the photographer, and a female Detention Officer, kept saying "let's make this one the Mug Shot of the week." After they took a particularly humiliating mug shot, the D.O.s had finished their fun with Marty and took him back to the holding tank.

Along the way, Atencio was escorted by Phoenix Police Officer Patrick Hanlon, who, according to the complaint, led Atencio "with his hands and arms bent in a position which caused Marty pain."
The complaint continues, stating that, "While Officer Hanlon was escorting Marty to the Linescan Room, Marty said `you're making Tony angry, you're making Tony angry.' Marty was telling Officer Hanlon that the officer was hurting him."

Shortly thereafter, in the jail's so-called "linescan room," as millions have now witnessed in video released by the MCSO, Atencio essentially did not remove his shoes fast enough for the officers present, with deadly consequences.

Atencio crossed his arms in front of him, in a non-violent stance. And that's when they pounced, piling onto Atencio, wailing on him and Tasing him, in what the suit refers to as a "jailers riot."

The complaint relates how these goons then dragged Atencio to a so-called "safe cell," where, as Atencio was held down, he allegedly was kneed more than once by MCSO detention officer Anthony Hatton.
Atencio was stripped of his clothes, and left to die. The jail's video system captured a naked Atencio breathing what looked like his dying breath on camera.

Outside the cell, as I've previously reported, Phoenix cops and MCSO detention officers partied like it was 1999.

"After this event," reads the complaint, "the jail's surveillance video outside `Safe Cell 4' shows D.O. Hatton, with a smile on his face, talking to other Officers, while two MCSO women danced and bumped their buttocks together."

Later, Atencio's brain-dead body was revived by officers and rushed by paramedics to a local hospital, where his family ultimately decided to remove him from life support.

The Atencios lawyer, tort titan Mike Manning, who just won a $3.2 million settlement for the family of diabetic mom and Arpaio jail victim Deborah Braillard, observes in the suit that Atencio's death is the direct result of the "culture of cruelty" in Arpaio's vast incarceration complex.

Also, the complaint makes clear, the MCSO is in direct violation of federal court orders instructing Arpaio and the county to provide proper medical screenings of prisoners for mental and physical illness.

Because the MCSO is not in compliance with these orders, Atencio was not properly screened on arrival at Fourth Avenue, where the health care "professional" who examined him noted signs of psychosis, yet did not provide Atencio with the medical help he needed.

Unfortunately, all the court orders, lawsuits and multi-million dollar payouts seem to do nothing to change the reality of Arpaio's disastrously-run jails.

The only real change will come if the voters wake up, and retire Arpaio on November 6 by voting for his Democratic rival Paul Penzone.

Otherwise there will be more victims, more Marty Atencios, and a lot more lawsuits.
Posted by Margaret Jean Plews at 8:39 AM