This is hardly justice for what the MCSO did to this woman and her family, and to the many who never manage to hold them responsible for abuse, neglect, and the conditions of confinement. I want to know what happens to the employees most culpable for her death...including Arpaio - does this mean the county (read: the taxpayers)  covers the civil liability, and the people who actually killed her get off scott free? I never even heard anything about personnel being disciplined in this case... 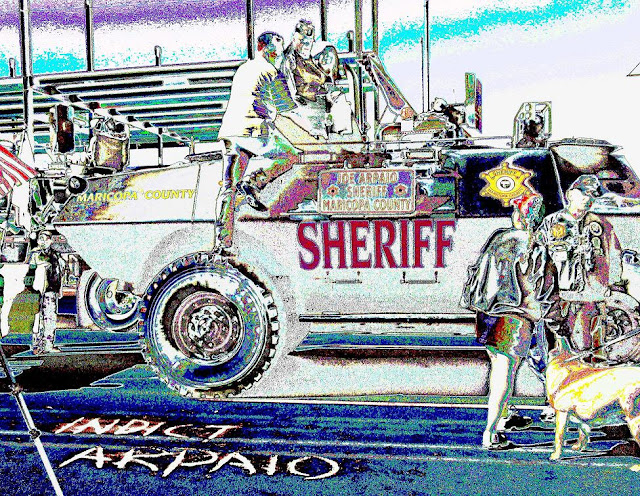 By JJ HensleyThe Republic | azcentral.comTue Nov 20, 2012 10:00 AM
Maricopa County on Tuesday approved paying $3.25 million to settle a lawsuit over the 2005 death of a diabetic inmate.
County supervisors, by a 3-1 vote, approved the on-again, off-again settlement involving Deborah Braillard.
The settlement was scheduled to be approved in mid-October, but the vote was postponed after an anti-Sheriff Joe Arpaio protest disrupted a meeting of the Maricopa County Board of Supervisors as the settlement was being considered. At a subsequent meeting, the supervisors deadlocked 2-2, killing the deal and setting the stage for the case to go back to trial.
The county already had spent $2.2 million defending the case.
The lawsuit was filed in 2006 by Braillard’s family after the 46-year-old woman died of complications of diabetes after being booked into the Fourth Avenue Jail on Jan.1, 2005. The lawsuit targets Maricopa County, the Sheriff’s Office and Correctional Health Services, a taxpayer-funded agency that treats county-jail inmates.
Jail health-care workers had noted Braillard’s condition in prior bookings but failed to do so when she was booked on suspicion of drug possession. When she became incoherent while in custody, employees attributed her symptoms to drug withdrawal. The symptoms were, in fact, caused by her diabetes, which went untreated.
In September, a Pinal County Superior Court judge issued a pretrial ruling saying there was sufficient evidence in the case to allow Braillard’s family to be awarded punitive damages if they prevail in the lawsuit, potentially exposing Maricopa County to more legal liability.
But after plaintiffs’ testimonies were completed, and while defense testimonies were under way, the two sides reached the $3.25 million settlement agreement."
------------

And this was what the court had to say about the MCSO jail that killed this poor woman. Not enough has really changed since then, unfortunately...

Jail medical personnel's prescribing of a Soviet-era drug that causes tremors, spasms and "potentially permanent and disfiguring involuntary movements around the face" was another jail deficiency mentioned in Wake's 83-page "conclusion of law."

The judge's decision in the landmark Graves v. Arpaio case (formerly Hart v. Arpaio and Hart v. Hill) came after he reviewed three weeks of court testimony and thousands of pages of records. Many of the same complaints the judge listed were outlined last December in New Times' story “Inhumanity Has a Price.”
Sadly, the long list of violations in the ruling involved hundreds of inmates who endured cruel and unusual conditions under Joe Arpaio's watch. Some died as a result.

Wake noted that the "Eighth Amendment provides inmates with a right to safe conditions of confinement, including an adequate level of personal security.”

Another problem spotlighted by Wake was that Arpaio’s jails do “not consistently ensure that all pretrial detainees actually receive all prescribed medications as ordered.” Another was that the jails' "inadequate medical records may create a risk of unnecessary pain and suffering."

These particular deficiencies cost Deborah Braillard her life when she was denied insulin for her diabetes.
Asked for a comment about the ruling, sheriff's spokesman Paul Chagolla responded, not surprisingly, with an accusation against New Times: "Yellow Journalist: You must be gleaning information from reputable reporters." We're not sure what that means, since New Times was the first to report on Wake's ruling Wednesday.

The sheriff did issue a press release about the ruling, amazingly claiming that it was a victory for him. "This judgment reinforces the excellent work being performed by the detention staff, and we all are always committed to improving the jail system wherever possible,” Arpaio was quoted as saying.

The judge's order should change a number of things in Arpaio's jails. Among them: green baloney, filthy living conditions, and broken plumbing. The order specifically requires Arpaio to address severe overcrowding at the Fourth Avenue Jail, where as many as 35 inmates can be crammed into one cell -- without beds -- for as long as 72 hours.

Subjecting certain detainees to extreme temperatures will no longer be allowed under the order, which should mean that Tent City cannot be as widely used as it is now.

For a look at Wake's entire 83-page order, click here. Highlights from his voluminous list of unconstitutional jail problems are listed below:

* “The Eighth Amendment prohibits deliberate indifference not only to an inmate’s current health problems, but also to conditions of confinement that are very likely to cause future serious illness and needless suffering...Budgetary constraints do not justify delay in treatment for a serious medical need.”

* “Pretrial detainees frequently are denied access to adequate medical, mental health, and dental care because they do not receive a timely in-person assessment of the urgency of their need for treatment.”

* "Inadequate medical records may create a risk of unnecessary pain and suffering in violation of the Eighth Amendment."

* “Thorazine is an antipsychotic medication with potentially severe and permanent side effects, including extremely painful involuntary muscle spasms of the neck, tongue, eyes or other muscles, a profound restlessness and constant movement of the feet and legs, drug-induced Parkinsonism (a resting tremor with some muscle rigidity), and tardive diskenesia (potentially permanent and disfiguring involuntary movements around the face). Although Correctional Health Services witnesses testified they would not prescribe thorazine as a first line of treatment, in fact, Correctional Health Services has prescribed thorazine for many psychotic, and even some not psychotic, pretrial detainees without justification for its use. Correctional Health Services psychiatrists sometimes prescribe thorazine as a sleep aid.”

* “Clinicians at the Maricopa County Jails often cannot provide a professional medical judgment because Correctional Health Services does not have a medical record and information system capable of timely providing health care professionals with the information they need to diagnose and treat pretrial detainees appropriately, including laboratory results and results of specialty consults.”

* “Correctional Health Services does not maintain a list of pretrial detainees with chronic diseases and cannot readily determine where they are housed and what medications have been prescribed for them.”
* "Systemic deficiencies in the screening process significantly impair continuity of care and result in failure to identify pretrial detainees with immediate medical needs."

"Overcrowding [in general] can violate the Eighth Amendment if it results in specific effects that form the basis for [a] violation, such as by causing increased violence, diluting constitutionally required services to the extent that they fall below the minimum [constitutional] standards, or by reaching a level “unfit for human habitation.”

* “Rats and/or mice remain a chronic problem in Maricopa County Jails, which Defendant Arpaio has made some efforts to eradicate. Cells are not consistently cleaned and sanitized prior to occupancy by pretrial detainees thereby causing an unconstitutional health risk…There are, therefore, current and ongoing violations of pretrial detainees’ constitutional rights."

* “If a prison’s plumbing is in such disrepair that it deprives inmates of basic elements of hygiene and seriously threatens their physical and mental well-being, it constitutes cruel and unusual punishment under the Eighth Amendment.”
Posted by Margaret Jean Plews at 6:41 PM