As I said in my previous correspondence, Mr. Ryan: you are the reason  your prisoners have rioted, not me. I don't think I even have contacts on Santa Rita. You appear to have plenty of discretion as to what you will and won't allow inside your institutions...I wish your SSU officers were as vigilant about keeping the heroin out as they are about stopping the flow of my free speech.

In any case, to the rest of you: here is the newsletter in question, in case you missed it. I mailed a list of the ethnic studies books banned from Arizona's public schools to a bunch of prisoners this summer, encouraging them to request and read them in solidarity with students - and in defiance of racism, which is necessary to uphold the current power structure inside.

I really didn't think those books would be off limits to adult prisoners too, but that sure is what it sounds like - this is the AZ DOC's General Counsel they sent to intimidate me, by the way. She really is scarier than Chuck - she used to be a capital crimes prosecutor at the AG's office. This newsletter isn't what I was so concerned about being confiscated, though - they still haven't responded to me on that count.

"UNAUTHORIZED PUBLICATIONS AND MATERIAL - Prohibited publications include those that by their nature or content threaten or are detrimental to the security, safety and orderly operation, or discipline of the facility, or inmate rehabilitation, or, are found to facilitate, encourage, incite, promote or instruct in criminal activity or unauthorized prison activity."


Shame on me for urging anyone - especially criminals - to resist racism and violence... 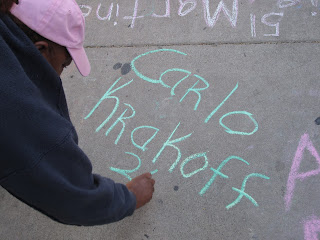 Carlo Krakoff, age 29,
died in an AZ state prison of a heroin overdose.
Substance abuse treatment programs are nearly impossible to get into in the AZ Department of Corrections, even for those who want it desperately - only 4% of all state prisoners were able to participate in one last year, including those we sent to private prisons specifically for DUI offenses. That's despite AZ DOC records stating that oapproximately 75% of prisoners are there for substance abuse-related crimes. Too many prisoners going in are actually clean but come out addicted to herion, as the drug is so plentiful and alternative activities for the mind, body and soul  are so few.