SOS from AZ prisons, CDC! I can't believe there's more botulism at Eyman The last time this happened was July 2012, and the AZ DOC's claim it was from prison hooch was an outright lie. Those men got sick from something they ate this summer, and three of the four were left to suffer with it for a week without medical attention before being taken to the hospital - check out this post here. That's twice now since Wexford took over that there's been a botulism outbreak.

So before anyone else buys the latest DOC report that their prisoners are just up to no good again, let's look at the other possible reasons for this kind of exceptionally rare outbreak to have occurred twice in the same prison in just a few months period of time (mind you - there were only 110 cases of botulism poisoning in the entire US in 2010 - only 9 of which were food-borne). Even if this batch of botulism really came from an alcoholic beverage cooked up in a cell and not a can of beef stew or something smuggled out of the chow hall, I'd be looking at what they're selling in the canteen theses days, boys. Something those guys are eating in that prison just isn't right. 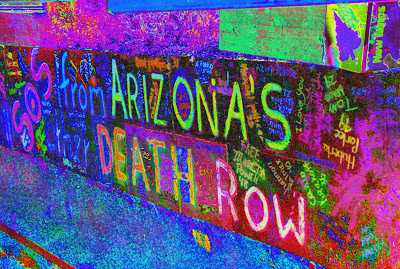 The Arizona Department of Corrections is already facing a class action suit, Parsons v Ryan, for gross medical neglect of its prisoners and the abuse of solitary confinement for managing the mentally ill. For their part, Wexford Health Sources has been outright accused of criminal misconduct in their management of AZ state prisoner health care since wining the contract in July 2012. If the CDC doesn't really look into things this time, who can the public trust to do so?

Prison hooch, or homemade alcohol,  is the likely source of a botulism outbreak at an Arizona prison that sent seven inmates to intensive care. The seven inmates, all from Special Management Unit 1 of the Arizona State Prison Complex Eyman in Florence, were hospitalized over the weekend.

Botulism is not spread through person-to-person contact. Although it can develop in contaminated wounds or through IV drug use, it most often develops after eating or drinking food that is tainted with the toxin. Botulism poisoning  must be treated with a course of special anti-toxin, the stockpile of which is controlled by the Centers for Disease Control and Prevention (CDC).

Health officials in Pinal County, where the prison is located, suspect that the inmates became ill after drinking  hooch made from fermented fruit. After discussions with county health officials, the CDC made a preliminary confirmation of botulism and released the anti-toxin. Samples of the hooch were collected and sent to the CDC lab for testing.

Five of the inmates became seriously ill on Saturday and two more fell ill on Sunday. All seven are in intensive care. Symptoms of botulism poisoning, which can be fatal, include: muscle weakness, difficulty speaking, chewing, swallowing and breathing; and paralysis.

County, state and federal authorities are working on the investigation into the outbreak. This is the second time in four months that such and incident has occurred at the prison. In August, four inmates contracted botulism from prison hooch.
Posted by Margaret Jean Plews at 5:44 AM