PEW: Americans are tired of packing the prisons. 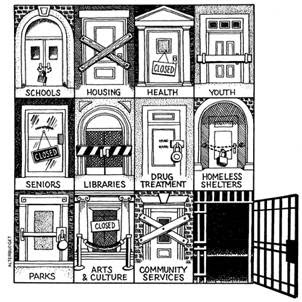 This press release below came to my attention tonight courtesy of Lois at the Real Cost of Prisons Project - check them out. And listen up, dear legislators...

Public Opinion on Sentencing and Corrections Policy in America

On behalf of the Pew Center on the States, Public Opinion Strategies and the Mellman Group conducted phone interviews with 1,200 likely voters nationwide on January 10-15, 2012. The survey has a margin of error of ±2.8%. The margin of error is higher for subgroups.

2012 polling, consistent with 2010 research, indicates that voters are concerned first and foremost with keeping communities and people safe. Without question, voters want a strong public safety system where criminals are held accountable and there are consequences for illegal activities. They also believe that these goals can be reached while reducing the size and cost of the prison system.

A national public opinion survey conducted in January 2012, along with similar surveys in Georgia, Missouri, and Oregon, found those attitudes persist and revealed opinions on specific policy solutions. (The focus of this survey is people who have been convicted of non-violent offenses.)

1. American voters believe too many people are in prison and the nation spends too much on imprisonment.

For details go to: