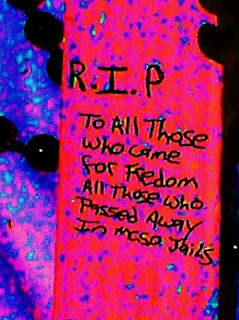 From what I hear every week, there are still some pretty serious deficiencies in how the health services staff treat prisoners in Joe's jails. And the AZ state prisons that are getting sued for having just about the worst correctional health care in the country are actually accredited, too, so don't get too excited here, folks. This fellow Tegeler's denial is a problem - he thinks the quality of their care has always been good, and he's the guy in charge - no wonder it was such a mess. The pervasive culture of contempt for prisoners and their families throughout both the MCSO and the AZ DOC also has to fundamentally change before any of the rest of this will really get better...that means, for starters, that the toxic leaders at the top of both institutions need to go.

The Maricopa County agency that treats jail inmates has earned back its national accreditation for its quality of care at all six county jails after losing the status three years ago.

The National Commission on Correctional Health Care, an independent agency that assesses mental-health and medical care in prisons and jails, in January 2009 revoked the county's accreditation, citing poor quality of care in county jails that failed to meet federal standards.

County administrators began working toward reaccreditation later that year. Over the next two years, national officials did a site visit and a survey to determine how the county fared on 67 national standards, which include emergency-response planning, procedures for inmate deaths, medical screening at intake and during transfers, healthy-lifestyle promotion and suicide prevention.

National surveyors found discrepancies with five of the standards and, last December, awarded conditional accreditation to the county's six jails, pending documentation of the county addressing those remaining concerns.

Tegeler said in the last three years, the county worked to improve documentation, increased staffing levels and added other requirements, such as assessing inmate medical requests within 12 hours.

But the system, like many large health-care organizations and detention centers, continues to struggle with high staff turnover and relatively low pay. The issue is not unique to Correctional Health Services and will not likely disappear soon, Tegeler said.

"What we have in place today is enough to have us accredited," Tegeler said.

The county must show every year that it is in compliance with national requirements. The commission will do an on-site evaluation every three years.

The county Board of Supervisors, meanwhile, is negotiating terms of a $4.55 million contract with Alabama-based NaphCare Inc. to develop a long-awaited electronic medical-records system for Correctional Health.

The county for years has been criticized for its outdated medical-record-keeping system. Tegeler said that while the electronic system is not an accreditation requirement, it will help the county continue to better document patients' medical records.

When the county lost accreditation, there were concerns that it would lead to more inmate lawsuits against the county and result in increased liability for taxpayers.

The number of claims filed has remained fairly steady, however, with about 140 filed in the three years before and the three years since accreditation was lost. The county has paid out $1.9 million in expenses and indemnity payments in the last three years, bringing the total for health-care-related legal expenses to $14.3 million since 1998.

But the return of accreditation does not absolve the county or its taxpayers from paying for the sins of the past.

The case of David Wayne McClurg embodies many of the problems that have afflicted the health-care operations in the jails for years, particularly because of the issues it raises with maintaining medical care as inmates are moved between facilities.

McClurg was arrested in Yavapai County in October 2007, and the nurse conducting his intake screening in Prescott noticed he had high blood pressure. McClurg was taken to a hospital in Prescott Valley, diagnosed with hypertension and given medication. When McClurg was transferred into Maricopa County Sheriff's Office custody days later, his paperwork included mention of his medical condition. Court documents also indicate that Correctional Health employees noted his medical condition when he arrived in Phoenix.

A chronology of the next 48 days that a private investigator prepared for a lawsuit indicates that McClurg, housed in Durango Jail, repeatedly complained to detention officers about dizziness, cold and extreme pain.
Doctors would later diagnose McClurg with Leriche syndrome, a circulatory disease, but his requests for medical attention were disregarded or discounted, according to court documents.

"The response was, 'Already on schedule for sick call,' " according to court documents.

In December 2007, McClurg was taken to Maricopa Medical Center, where his toes were amputated, followed by his legs. He would die in a Phoenix hospital in September 2008, prompting his family members to file a lawsuit in July 2009.

"The MCSO Detention Officers treated him as if he were a prevaricator feigning his symptoms to miss court, get special treatment or medical care," the investigator wrote. "It would not be an exaggeration to describe the next nine months as a living hell until his death."

His family's lawsuit continues to make its way through federal court, and the county had already paid more than $13,000 in expenses before the case left Superior Court.

Medical autonomy -- the ability for health-care providers to make treatment decisions without interference from detention officers -- was among the judging standards Correctional Health Services faced to regain accreditation.

Tegeler said that communication between detention officers and health-care staff had improved in recent years and that the two groups had never had problems working together to ensure health care is available to inmates even when security concerns lock down the jails.

"If there's a medical decision, there's nothing that impedes it," Tegeler said. "That has never been an issue here. MCSO has never been standing in the way."

Administrators for both groups said the reaccreditation process helped staff members refocus on the importance of documenting every interaction with patients, which also allows the county to refute frivolous inmate claims.

"The quality of care through this has really not been the issue," said MaryEllen Sheppard, a sheriff's deputy chief in custody operations. "It's the ability to document it."

Max Wilson, chairman of the county Board of Supervisors, said accreditation solidifies Correctional Health's reputation as a strong health organization, "and that's good for Maricopa County. ... We're up to the expectation that we should have been."

Mary Rose Wilcox, the most vocal county supervisor on issues with Correctional Health, said she is relieved it received the national status again.

"With that relief was also pride, because we were able to work back up again," Wilcox said, adding that the cooperation between the Sheriff's Office and Correctional Health was key. "You cannot operate alone, and that's what we were doing, MCSO and CHS were separate spheres."
Posted by Margaret Jean Plews at 4:27 AM