If nothing else, it sure is abusive... 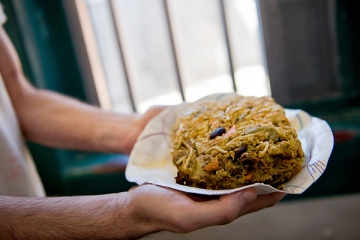 Can Food Be Cruel and Unusual Punishment?

If you've never heard of nutriloaf, consider yourself lucky. It's a prison meal that just might violate the 8th amendment


If you’ve led a law-abiding life, chances are you have never encountered “nutriloaf,” a foul-tasting brick served to prisoners who get out of line. How foul-tasting? Depending on the recipe, somewhere on the spectrum from unpleasant to vomit inducing. A Milwaukee inmate who threw up violently for days after eating nutriloaf asked a federal appeals court to consider whether nutriloaf could be so bad that it is unconstitutional. Last week, that court became the first federal appeals court to say yes.

Despite occasional claims by the tough-on-crime crowd, prison food is generally lousy – or worse. There have long been reports of prisons that serve roadkill – “meat so fresh you can still see the tire marks,” as one news story put it. Joe Arpaio, the sheriff of Maricopa County, Arizona, has boasted of serving meals that cost between 15 and 40 cents each.

Nutriloaf may not be made from skid-marked meat – as far as we know – but the reviews are not good. Chicago Magazine’s food critic sampled the Cook County Jail version and wrote that it resembled “the thick, pulpy aftermath of something you dissected in high school: so intrinsically disagreeable that my throat nearly closed up reflexively.”

Prude’s subsequent lawsuit against his jailers was initially thrown out, but last week the U.S. Court of Appeals for the 7th Circuit said that the nutriloaf he was served could violate the 8th Amendment prohibition on cruel and unusual punishment. The decision – written by conservative, Reagan-appointee Richard Posner, for a three-judge panel – said Prude should have a lawyer appointed to help him make his case.

Terrance Prude’s case in Milwaukee, however, was unusually strong. The court was troubled by the extreme reaction Prude and other inmates had to the nutriloaf. As Judge Posner observed, “healthy, sober adults do not vomit a meal just because it doesn’t taste good.” It was also disturbed by the jail’s refusal to reveal its recipe. It would only offer an unsupported claim that its nutriloaf “has been determined to be a nutritious substance for regular meals.”

The ruling does not mean that Prude will ultimately prevail. But it opens the door for him to learn more about what happened and, if the facts support it, to win on his constitutional claim. If Prude can show that jail officials knew the nutriloaf was sickening him and decided to do nothing about it, it would constitute deliberate indifference to a serious health problem – and violate the 8th Amendment.

Judges are far less sympathetic to prison conditions claims today than they were in the 1960s and 1970s, when courts overhauled many of the nation’s worst prisons and jails. They are quicker to throw cases like this out of court – with a boost from Congress, which in 1996 raised the bar on prison lawsuits with the Prison Litigation Reform Act. In a particularly chilly ruling in 2005, the Supreme Court unanimously rejected an inmate challenge to conditions in Ohio’s ultraharsh “supermax” prison.

But this judicial cold shoulder may be getting a bit less cold. The public is not as focused on crime these days, with nationwide crime rates at decades-long lows. And prisons are hugely overcrowded – and corrections budgets are strapped – as a result of tough sentencing laws. Last year, surprisingly, the conservative-leaning Supreme Court upheld, by a 5-4 vote, an order requiring California to reduce its exploding prison population. And now a three-judge panel that included a Reagan appointee and a George W. Bush appointee has said that nutriloaf can be unconstitutional.

The courts will not return any time soon to 1960s-style judicial supervision of prisons conditions. But the California and Milwaukee decisions suggest that judges are still willing to stand up for a more modest principle: that prisons — and prison food — cannot be seriously dangerous.

Cohen, the author of Nothing to Fear, teaches at Yale Law School. The views expressed are solely his own.