According to KidsCount:
11.2% of  Mesa's children and
7.1% of her seniors live below poverty.
8.5% of Mesa's kids live in high-poverty neighborhoods, and
13.1% of teenagers are high school drop-outs.
Mesa also has a falling crime rate.
In light of all that, you'd think the city could find something better to do with her money than incentivize further criminalization and incarceration of her black, brown and poor people... 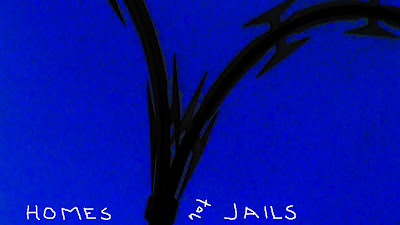 Stung by soaring costs for housing misdemeanor offenders in the county jail, Mesa is looking for someone willing to build and operate a private one.
The City Council's public safety committee told the police department Monday it could issue a request for proposals to build the jail, which also would serve Gilbert, Chandler, Tempe and perhaps Scottsdale.

"This is a positive step," committee chairman Dennis Kavanaugh said, noting that a regional wireless cooperative among public-safety agencies could serve as a model.

The size and cost of the jail are not specified. Assistant Police Chief Mike Dvorak said the department anticipates several proposals and will evaluate them on their merits.

The idea has been simmering for several years and has new momentum because of a projected spike in what the county charges cities to book and house misdemeanor offenders.

Mesa expects to spend $5.5 million for that this year. Next year's estimate is $6.9 million.

That money comes from Mesa's general fund and is not considered part of the police budget, Police Chief Frank Milstead said.

"We're not going to quit buying police cars because we have this big spike," he said. "But we've just got to come up with a better business plan than what we're doing now."

The private jail would be overseen by a board representing the police agencies using it. Companies bidding the on the project will be asked for numerous details, including how they plan to staff, operate and secure the jail.

Compliance with national standards for correctional facilities would be required.

If the model works well in the East Valley, Dvorak said other regions might want to pick up on the idea.
Arizona has no private jails at present. It does have private prisons, which hold felony offenders for a year or longer.

Milstead said the proposal for a private jail, which was first raised several years ago, went dormant for a while because of a notorious escape from a private prison in Kingman, Ariz., in 2010.

Two of the escapees murdered an Oklahoma couple.

"We were afraid at the time that people would not be able to differentiate ... between a private prison and a private jail," Milstead said.

At present, misdemeanor suspects are taken first to city holding facilities to be booked. They're arraigned in city court within 24 hours and if the court orders them held, they are taken to the county jail.

Peviously, the county's Southeast Valley jail at Mesa Drive and U.S. 60 both booked and housed offenders. The county stopped housing prisoners early last decade, and in 2007 stopped using it to book offenders as well.

Mesa Police Chief Frank Milstead said the county has indicated it would reopen the Southeast Valley facility within the next two months, but only to receive prisoners.

That still would help local departments, Milstead said, because they wouldn't have to spend so much time taking prisoners to Phoenix.

The old jail has 180 beds. Even if that part also were to reopen, it could house only some of the hundreds of misdemeanor offenders for which Southeast Valley cities are currently responsible.

Milstead and Kavanaugh both raised the possibility of the county turning over the vacant jail to Mesa or to a regional cooperative, but that would require political buy-in from the county board.

Mesa will pursue that with the county while also considering bids from private jail operators.