Wexford Health Sources has a rich history of undercutting prisoner health care and fighting off huge lawsuits. The state of New Mexico even terminated their corrections contract for their poor service delivery several years ago, and after they were hired by Mississippi to care for their prisoners, the prisoner death rate began to skyrocket. Here's their rap sheet, maintained by the Private Corrections Working Group. Their database is composed of news clippings and organized chronologically by state.

In light of the shoddy job the AZ Department of Corrections has done on prisoner health care, it should come as no surprise that they would pick Wexford to carry on their tradition of neglect...here's what happened to the prisoners in Mississippi once they took over:

Mississippi's inmate mortality rate was second in the nation in 2006, the most recent year for which national data are available. And according to a review of state-level reports, Mississippi's mortality rate rose in 2007. It's a situation that is raising legal concerns with lawmakers and moral questions with prison-reform advocates.

Mississippi Department of Corrections officials say the high rate of in-custody deaths is the result of a number of factors: aging prisoners, drug and alcohol abuse prior to incarceration and the generally unhealthy lifestyles of Mississippians.

But Patti Barber, executive director of the prison-reform group Mississippi CURE, said the state does a poor job of looking after the chronic health needs of inmates. "We are getting tons of letters from inmates, for instance, who have been diagnosed with diabetes. They are not getting their (blood) sugar checked daily, as they are supposed to," she said. "Things just plain aren't getting done."

That is what the Mississippi Legislature's Joint Committee on Performance Evaluation and Expenditure Review found last December when it released a report on inmate health care. The PEER report found inmates did not receive timely medical treatment from MDOC's medical contractor, Pittsburgh-based Wexford Health Sources, and that Wexford did not meet medical care standards set forth under its contract with the state. In addition, the PEER committee found Wexford did not adhere to its own standards in following up on inmates with chronic health problems. Wexford, which took over inmate care in 2006, referred all questions to MDOC.... 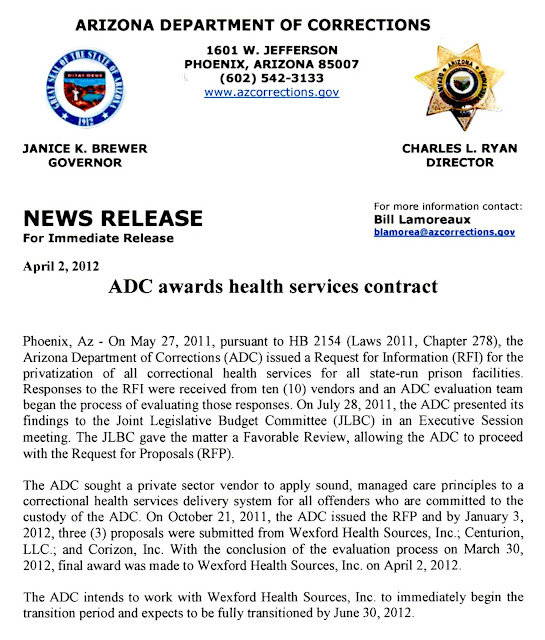 If there's anyone out there from Wexford who has a different take on your company's ability to treat our prisoners right, please feel free to contact me - I'll seriously consider publishing your opinion on this matter. We'd like to know if you folks have finally gotten it right.

Posted by Margaret Jean Plews at 10:49 AM