Incarceration and Family Values: Time to wake up America. 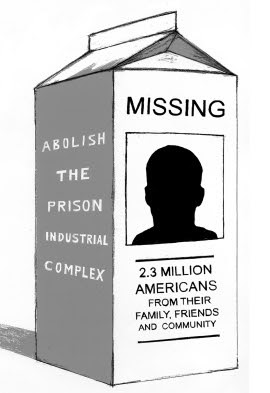 art by Nicolas Lampert at Justseeds

Sadhbh Walshe has been doing a great series on American Prisons for the UK's Guardian. This is one of many pieces.

A shout out and thank you to Miss America, too, for championing the children of incarcerated parents...

Laura Kaeppeler, Miss America, who is using her reign – and personal experience –
to publicise the cause of children of incarcerated parents.
Photograph: laurakaeppeler.com/PR
When Laura Kaeppeler was 14 years old, her father was sentenced to 18 months in prison for mail fraud. She found the experience of having an incarcerated parent so traumatic and shameful that when she was crowned Miss America in January of this year, she announced that rather than using her position to champion a nebulous cause like world peace, she would be focusing any attention that comes her way on what has become a very American problem, the growing number of children who have lost a parent to prison.

In the last 30 years or so, the rush to lock people up for ridiculously long sentences even for minor crimes has led to an explosion of the prison population. And as the majority of prisoners are also parents, the population of children with a father or mother in prison has also exploded. Since 1990, the number of children with a parent in prison has increased overall by 82%, and the number of incarcerated mothers has increased at almost twice the rate of incarcerated fathers. There are now an estimated 10 million American children who have had a parent in prison (pdf), on parole or under some kind of probationary supervision. And, as is always the case when you are talking about the prison population, there is a disturbing racial disparity; one in 15 black children have a parent in prison, compared to one in 111 white children.

It's hardly surprising to learn that the experience of having a mother or father in prison does not tend to be an empowering one. But there is evidence aplenty to show that, like Miss America, these children are often deeply traumatized by the experience. Their school work suffers, they can become emotionally withdrawn or aggressively act out. The negative consequences tend to be exacerbated if they are unable to maintain meaningful contact with the parent they love while he or she is in prison; even more so if, as often happens, they lose contact with that parent permanently.

Maintaining contact with an incarcerated parent is challenging, to say the least, and certainly not something that the state or federal authorities seem to think is a priority. If they did, they surely would not have more than half the prison population in institutions that are between 100 and 500 miles from inmates' actual homes, and some over 500 miles from home, making visits next to impossible for struggling families. This distance factor alone goes a long way to explaining why, as of 2004, 58.5% of inmates in state prison and 44.7% of inmates in federal prison had never received a visit from their kids. If a child in Philadelphia wants to see their mother in the women's prison that is an eight-hour drive away on the other side of the state, they have to be up at 1am to board a special charter bus to take them there.

These visits are crucially important for the children, however. One foster mother who was looking after two sisters whose parents were in prison for drug offenses described bringing the girls to visit their father whom they hadn't seen in years:


"On the day of the visit, we got up early to hit the road in time to make visiting hours at the prison. Once we arrived, my purse was searched, the children's colored drawings for their dad were inspected and we had to walk through a metal detector, before being locked into the family visit room. I was relying on my girls to remember their father, since I had no idea what he looked like. They lit up like Christmas trees when they caught sight of an Abraham Lincoln-esque figure in prison blues who walked across the room.


"As a foster parent, I didn't want to intrude on the first visit in years with his children, so I never really talked with their dad. But he looked very happy to see them and promised his little girls the world. I heard him promise to get out of prison and to get a house where all of the family could be together again. Since the family included four other siblings, my heart broke a little when I realized how very tough that task would be for him, a former felon. Later, I heard that he, like a lot of prisoners, had his parental rights terminated, which is only one of the tragic outcomes of incarcerating parents."

This is, indeed, one of the tragic outcomes of parental incarceration – that even a short prison sentence can result in the lifetime loss of one's children. In 1997, Congress passed the Adoption and Safe Families Act (ASFA), which requires foster care agencies to file termination of parental rights if a child has been in care for 15 of the last 22 months. So, if a mother gets a median 36-month sentence for some minor drug offense, she is at risk of having her parental rights terminated. Once that happens, the termination is permanent and irreversible.

Across the US, advocacy groups are trying to have the ASFA law amended so that incarceration by itself will not be grounds for losing one's children. They are also fighting to have prisoners placed closer to home or, better still, in halfway houses if the offense was a minor one, so that visiting is not as difficult or traumatic. Parenting classes for prisoners and better visiting conditions in general will help also. But unless we stop using incarceration as a one-stop shop for all social ills, stop being "tough on crime" and start being tough on the causes of crime, it's impossible to see how this cycle of despair will ever end.