I didn't post the press release below when it first came out because it's propaganda of the highest order. The state's prosecutors are all just trying to justify their mandatory minimums and derail any efforts at sentencing and prison reform this year. The AZ Department of Corrections own data shows that there's been a decrease, not an increase, in the violent criminals they've been committing in the past two years - it's not an inherently more violent population of prisoners - it's a more abusive and neglectful administration. 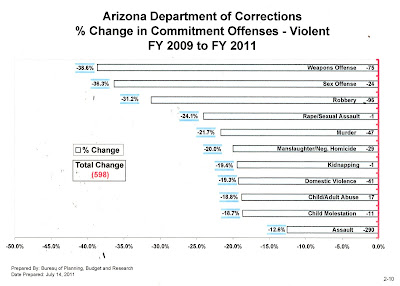 Az Department of Corrections:
decrease in committed violent offenders 2009-2011, from their annual report.

Fischer's last report for the state prosecutors association (Prisoners in Arizona: A Profile of the Inmate Population) was a huge distortion to manipulate the public's fears, too (here's the PR campaign that went with that one, and the excellent, detailed report put out by AZ Attorneys for Criminal Justice disputing it). Deception seems to be the only way the state prosecutors association can make it's case, which means they don't have much of one to begin with. Here are minutes to the 2010 AZ House Committee on Sentencing Reform where Professor Mona Lynch - also an "expert" on criminal justice in Arizona - takes that report apart.

This interview on KJZZ about the more recent report - with criminologist Franklin Zimring, Bill Montgomery and Sheila Polk - is pretty interesting. Zimring's done a lot of research on the claims the prosecutors assert himself, and dispels many of the myths this kind of thing perpetuates.
For a look at what else may be behind the escalating violence in AZ state prisons, check out my blog post on it here...

Speaking of truth-in-sentencing and our tough state prosecutors, check out how seriously Barbara LaWall's office (Pima County Attorney) takes sexual abuse of children when perpetrated by corrections' officers...How is it "truth-in-sentencing" when double standards for law enforcement officers remain?

PHOENIX, AZ (January 5, 2012) – Arizona has prevented more than a million crimes since 1994 by incarcerating its most dangerous criminals, according to a major research study released today. Titled Prisoners in Arizona: Truth-in-Sentencing, Time Served and Recidivism, the study concludes that Arizona’s Truth-in-Sentencing (TIS) laws, which ensure that convicted criminals serve at least 85% of their sentence, led to a 17.7% drop in reported crime over a fifteen year period after TIS laws were enacted in 1994.

“This study provides the crucial element that has been missing from the public policy discussion about our criminal justice system, namely, facts,” said Maricopa County Bill Montgomery. “What this research shows is that our current sentencing laws are putting the right people in prison for the right reasons and keeping us all safer as a result,” he added.

Commissioned by the Arizona Prosecuting Attorneys Advisory Council, the study notes that Arizona’s crime rate fell by 38.5% from 2002 to 2010, more than twice the national rate. At the same time, Arizona’s prison population has become increasingly violent. According to the study, more than 95% of inmates are violent and/or repeat felony offenders.

The study also found that, contrary to popular belief, Arizona’s prison population has been on a steady downward trend since 2009, dropping by an average of 31 inmates per month after growing by more than 100 inmates per month for 38 years. These numbers reflect the success of diversion programs, substance abuse treatment, probation and other prison alternatives that have prevented low-level offenders from transitioning to full time criminal careers.

“These are precisely the outcomes that proponents of sentencing reform predicted nearly two decades ago,” said Yavapai County Attorney Sheila Polk, who serves as Chairman of the Arizona Prosecuting Attorneys Advisory Council. “The very clear, documented benefits we are seeing in Arizona should serve as an important guide to other states that are looking at making similar reforms to their sentencing systems,” Polk added.

Prisoners in Arizona is authored by Daryl R. Fischer, Ph.D., a widely respected expert on criminal justice statistical analysis and former Research Manager for the Arizona Department of Corrections. The study builds on a foundation of information presented in an earlier study Dr. Fischer conducted in 2010. Prisoners in Arizona is available for download at www.azsentencing.org.
Posted by Margaret Jean Plews at 12:50 PM