(better yet, let's see him indicted in office...) 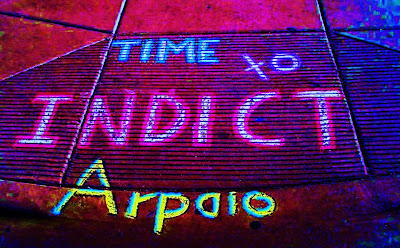 4th Avenue Jail, PHOENIX
chalk the police day, 2011
In case the DOJ doesn't come through with any of their indictments, please support this Change.org petition for Joe Arpaio to resign as Maricopa County Sheriff - just keep in mind that if he doesn't leave after getting it
(copies go to him and the County Board of Supervisors), he'll still have insane power as well as all of our names...

I signed it anyway. Go for it if you dare.


"Demand the resignation of Joe Arpaio"

"As Maricopa County Sheriff, Joe Arpaio has failed to protect the public and carry out his duties as an elected official in a Constitutional manner. The latest disclosure that MCSO failed to investigate hundreds of sex-crime cases involving children is just one in a long list of atrocities that have taken place during Arpaio's 20 years in power.

It's time for Sheriff Joe Arpaio to resign."

CRAZY ENOUGH TO SIGN
Posted by Margaret Jean Plews at 12:13 AM