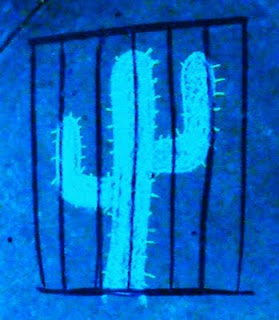 Most of us already know that Governor Brewer and select legislators are tainted by corruption and influence-peddling when it comes to the private prison industry in Arizona. It troubles me greatly to know that two of our Arizona Regents (former senator Dennis DeConcini and Del Webb lifer/Southwest Gas director Anne Mariucci) also sit on the board of Corrections Corporation of America (CCA), which is already profiting at the expense of higher education in this state. They stand to gain substantially more despite legislation enacted specifically to make sure that dirty deals aren't done this way which undermine our ability to operate state services cost-effectively. The state, in fact, is the one insisting on offering these prison contracts even if at a loss - hoping to skirt the law on procedural grounds that the wrong people are suing them.

Wait - what's that again? The only way we can get the state to follow its own statues is for the right party to sue them?! If the courts won't let the AFSC represent the people's interests - and the Attorney General is busy representing the state AGAINST the people - then who will have standing and resources to bring this suit? Why isn't the AZ Board of Regents suing - or helping us sue - on behalf of students whose access to higher education is clearly being compromised for the profit of private prisons? Oh yeah - there's that conflict of interest thing that keeps their CCA sell-outs and the like from fulfilling their duty to the people they are really responsible to first - us.

The rest of us who should have standing to sue the state into compliance with the law - not just college students, but AHCCCS patients, poor and homeless families, hungry children, public schools, and just about everyone else who's taken a cut to our public services while the Department of Corrections got a budget increase in order to further privatize our punishment - don't appear to have any other champions willing to take it to court. Maybe we can sell our food stamps and trade personal services to hire someone...except that would be against the law, and we know the state would prosecute that kind of fraud while it invests millions in defending Brewer's shady deals and dirty laws with our money and trust.

We, the people, are not only being taxed to profit these prison operators, but we're also the ones being commodified so our bodies and labor can be traded on the market. Those new prison beds aren't being built to sit empty. If crime goes down in Arizona, you can bet that more of us will be criminalized and imprisoned under new laws and penalties, or new ways of enforcing old ones. It's happening already, in fact - not just to migrants, either. As fewer people drink and drive, for example, the police are just nailing more people for driving on their prescribed medications.

Beau Hodai's done a lot of great investigative work on the private prison industry, entities like ALEC, and legislative corruption, for anyone doing serious research. Not surprisingly his own website, dbapress.com, seems right now to have been sabotaged - can't imagine by whom. His archives at In These Times are safe and intact today, however, so hit them while you can.

The Arizona Bureau of Planning, Budget and Research notes a whopping savings of three cents per head among the relatively low-maintenance minimum security crowd held in private pens: $46.56 per diem for a private bed, versus $46.59 at state-run institutions.

The recent dismissal of a lawsuit filed against both Arizona Department of Corrections (ADC) Director Charles Ryan and Arizona Governor Jan Brewer (R) is the latest step in the state’s hell-bent plan to roughly double its number of privately managed prison “beds.”

The suit, filed in an Arizona Superior Court by the American Friends Service Committee (AFSC) on September 12, sought an injunction against ADC and the governor’s pending award of 5,000 new prison beds to be operated by a for-profit vendor. The state currently contracts out more than 6,500 minimum- and medium-security beds at seven facilities with Geo Group, the nation’s second largest private prison operator, and Management and Training Corporation (MTC).

AFSC argued that ADC is negligent in its statutorily required duty to conduct biennial cost and quality assessments of the state’s private prisons. The purpose of these assessments is to determine whether the state is receiving the same quality of service from private prison operators as provided by public facilities.

Nevertheless, ADC has not completed a single survey.

While the law defines a clear list of specific items to be assessed (such as security standards and personnel training), and a set time frame for assessments to be performed (every two years), it does not say that these assessments are the sole bar that must be used to measure standards of private penitentiaries.

Without the existence of these biennial reports, it’s anyone’s guess what cost comparison model is used by ADC, the legislature and the governor’s office.

When asked what criteria the department uses to determine if the private correctional beds managed in Arizona are operating with the same level of security and care as state-run facilities, and whether those facilities are providing any savings to the public, ADC spokesman Barrett Marson directed In These Times to the ADC’s “Fiscal Year 2010 Operating Per Capita Cost Report.”

The most recent FY 2010 per capita report available–published by the Arizona Bureau of Planning, Budget and Research on April 13, 2011–offers nothing to suggest the state should continue its rush toward the privatization of correctional services. The report states that the total adjusted per diem (per prisoner, per day) cost for state-run medium security facilities was $48.42. The per diem for medium security prisoners held by private contractors amounted to $53.02.

The bureau did note a whopping savings of three cents per head among the relatively low-maintenance minimum security crowd held in private pens–at $46.56 per diem for a private bed, versus $46.59 at state-run institutions. But the report goes on to quickly deflate the standing of that $0.03 margin, stating: “[There are several] inmate management functions that are provided and paid for by the state but are not provided by the private contractors. This inequity increases the state per capita cost which, in comparison, artificially lowers the private bed cost.”

Nevertheless, AFSC’s suit was dismissed on October 27 by Arizona Superior Court Judge Arthur Anderson. The basis for the dismissal, however, was not based on the merits of the suit, but rather in Anderson’s concurrence with Assistant Attorney General Rex Nowlan. Nowlan had argued that AFSC and other plaintiffs did not have standing to seek relief for a violation of the law requiring assessment.

AFSC is appealing the dismissal. “We will vigorously fight the state’s effort to dismiss the case on procedural standing grounds,” said Vince Rabago, a former state prosecutor who is representing AFSC in the case. “Given the obvious public safety issues and impact on taxpayers, the parties should have a hearing on the merits of the state violating its own laws for more than two decades.”
Posted by Margaret Jean Plews at 10:48 AM