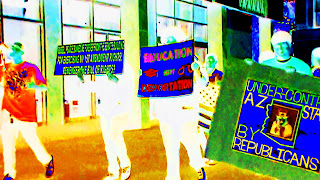 As college students prepare for Spring Break next week, and as colleges face 20% budget cuts next year, Arizonans from around the state will be at the State Capitol from Monday to Friday of next week.

The state legislators have not done their most important job, and that is to balance the budget.

Instead they have been distracting the citizens of this great state with all these bogus and unconstitutional bills, everything from having guns in public buildings and universities, to forming the Arizona Rangers, a secret police force for Jan Brewer, a state border wall to be built with detained immigrants, huge 9 digit corporate tax cuts, anti-union bills, and of course the regular slew of anti-immigrant bills.

Arizona have had enough and say YA BASTA!

Caravans will be converging on the state capitol at noon on Monday.

In Tucson we will be meeting at Rudy Garcia Park, on Irvington and 6th Ave, at 8:30am and leaving promptly at 9pm. On Sunday evening from 5-7pm we will be having a sign-making party for our vehicles and person once we get to the capitol at Fortin de las Flores, on the Southeast corner of 31st and 6th Ave.

Russell Pearce first banned Latino activists, then the public, then the media from the senate building. He also took out the concrete/stone benches at the state senate building to tell Arizonans “you are not welcome here, you do not have a voice in your democracy.”

As a special bonus, former President George W. Bush will be visiting the area on Wednesday.

Come join the rest of the people that have had enough, and let your voice be heard!

Many people in Phoenix are opening up their homes for those who need a place to sleep or shower as protesters keep a 24 hour presence to tell Russell Pearce and the nation to stop the hate, fix the state, and BALANCE THE BUDGET!

Our jobs, schools, healthcare, and future depend on it!

For the latest info you can join the Facebook event page in English here, or in Spanish here. Anyone Tweeting from the Capitol will be using the hashtag #AZM14 and #AltoArizona for the Spring Break at the Capitol weeklong event.

Photos below are from the March 4, 2011 Phoenix student walk-out, where several hundred youth converged on the Capitol protesting the recent anti-immigration laws...

Stay tuned for a week long demonstration at the legislature now. :) 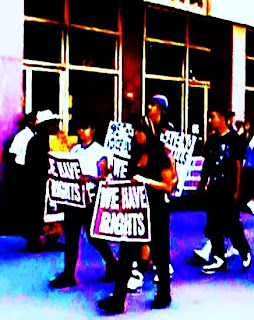 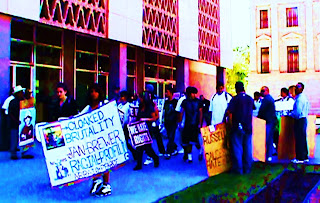 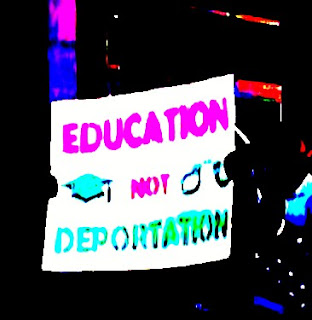 If you can't get to the capitol for any of the demonstrations there this week, try a little anarchy and autonomous action- it only takes one person to make resistance visible, and you can orchestrate something from wherever you are: put a sign on your car, or street corner, or chalk the sidewalks in choice places in your own town (or all of the above, so they think there's more than just one of you out nuts there). It's the conversations with ordinary people walking by that you have and generate about politics in the grocery store parking lot that will in time make a difference.

Better yet, find a place where you're likely to be seen by undocumented youth, and make sure they see your signs of solidarity. Your message will inspire and encourage them at a time when the state is legislating hate in their direction. I run into one of the McCain DREAM Fasters, Carlos, at these demonstrations and still get a big hug every time. 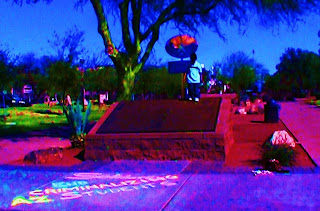 I kind of like the"Phoenix Point of Pride" signs with the image of the Arizona flag on it, like this one at Wes Bolin up at the Capitol. Just make sure to stay on the public sidewalks, keep it relatively clean for the kids there (their teachers will use your action as a chance to discuss the 1st Amendment, if they're any good), and don't deface any memorials, or you'll make us all pay for it.
Posted by Prison Abolitionist at 11:30 PM