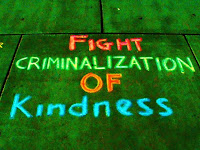 AZ State Capitol / Wes Bolin Plaza
Phoenix: February, 2011.
Yesterday the legislature found $5 million for "border security" in a non-border county while still maintaining that we don't have the $1.4 million necessary to restore AHCCCS transplant funding this year. Even the Arizona Republic is appalled - and that's saying a lot. People like Pearce and Kavanagh have been leading the citizens of this state to a collective spiritual death like pied pipers for too long; it's not the "criminal aliens" we have to fear - it's the home-grown terrorists we put into the legislature who endanger what is dear to us the most: our children. We are teaching them to justify cruelty to their fellow beings.


I can't comprehend the sheer brutality of the Arizona state legislature - when are the voters in this state going to wake up? Those people are hardly working in our people's best interests - if they're willing to kill Francisco Felix and coach Tiffany Tate because the chances we can save their lives don't make the expense worth it (according to Rep. John Kavanagh), they'll do the same to the rest of us when the time comes.

The dying are taxpayers too: AZ Families deserve AHCCCS.
AZ State Capitol / Wes Bolin Plaza
Phoenix: February, 2011.
The average citizen here may not be so ill-intended, but they're following their leaders like sheep these days - some with great enthusiasm, in fact - and it's having devastating consequences. The rest of the world is fighting for their freedom, while we're being ground down by more a oppressive government in Arizona at an alarming rate. The Tea Party is hardly about to protect us from tyrrany - they're not just innocent bystanders - they're among the chief perpetrators.


The claim "we can't afford it" when it comes to the People's needs holds no water in Arizona - the elite have effectively redirected resources from the poor to their own pockets through tax code changes and re-appropriations. There's plenty of money to expand the prison system, which we'll be needing to do soon since the state has one of the highest home foreclosure rates in the nation, and it's not getting better. Push even the best families to desperation and cancel their kids' or mother's health insurance, and you'll find economic crime go up for sure. Fortunately, the relationship between crime and poverty works the other way, too.


Apparently the AZ legislature doesn't know or care about how to reduce crime, though - the concept of evidence-based practice in the criminal justice profession has about 20 more years of catching up to do in Arizona, as we do in the areas of public health and mental health services out here (we're incarcerating ten mentally ill people for every o

ne we hospitalize for their psychiatric symptoms - and when we do that they tend to be even further neglected and abused). This regressive, repressive state is more about social control and punishing the poor and deviant (that's me) than ever, in fact - they seem to seek vengeance and power throguh of their exercises of "justice", not community-building, healing for victims, or societal transformation.

te the power of racism, xenophobia, and fear to drive policy and funding priorities in this soul-sick place. All aid to people who can't provide documentation of their state-legitimized presence in Arizona is being criminalized at a rapid pace by Russ Pearce's Me Party Senate: from educators to health care providers to ordinary citizens, we're all expected to turn our Latino neighbors in as suspects for the police to clear before we extend a hand.


I can only imagine what a delightful bunch of kids Arizona's voting public is raising to lead us into the future. If you're a person of color here and in dire straits (or even just doing your job) look for Sheriff Joe's goons to come your way - and hope they don't mistakenly arrest you - or beat or kill you once you're taken prisoner. Give me an "anchor baby" from Mexico over a self-interested sociopath descended from Anglo immigrants any day - at least those children and their parents would have the courage to stop at the side of the road and help my family if we were in trouble...and they don't tend to grow up to be Nazis.

AZ State Senator Russell Pearce's son, Joshua, in a mugshot.
That's a neo-Nazi tattoo he sports...is it any wonder?

The bills were passed despite more than 20,000 emails sent to Appropriations Committee members from Arizonans outraged at these widespread attacks on our state in the four days leading up to the hearing.

The bills passed yesterday by the Committee include:

SB1611-- “Immigration Omnibus” or the “Throwing Arizona Under-the-Bus” bill –Sponsored by Senator Russell Pearce, this bill is a 30-page, measure requiring business owners, police officers, apartment renters, school employees, and others to verify citizenship, notify immigration and in some cases, failure to do so could result in loss of licenses, certification or imprisonment.

SB1308 and 1309 – “Eroding Children’s Futures and the Constitution” bills. Two bills introduced by Senator Ron Gould to create a new Arizona Citizenship that excludes children born to parents in the U.S. without immigration authorization. The bills are an attempt to ignite a national legal battle challenging the 14th amendment of the Constitution’s recognition of birthright citizenship.

SB1407 and 1141 – “Schools as Immigration Checkpoints” bills. Two bills introduced by Senator Steve Smith that would require K-12 schools to report on the immigration status of their students. Failure to comply would result in loss of funding.

SB1405 –“Turning Health Providers into Health Deniers” bill. This bill introduced by Senator Steve Smith would require hospital employees to verify the citizenship of people seeking emergency and non-emergency medical attention and to notify immigration agents if someone cannot prove they are authorized to be in the U.S.

The following is a statement from Border Action Network’s Executive Director, Jennifer Allen regarding yesterday’s passage of these sweeping measures:

“Despite the many legislators who campaigned against big government on their election soap boxes, the Arizona Senate Appropriations Committee approved six bills yesterday that would result in big government prying eyes in hospitals, schools, community colleges, universities, motor vehicles, housing, and businesses.

These bills would negatively impact all Arizonans who drive or buy cars, rent apartments, hire employees, attend elementary school or community college, give birth, or get sick and seek medical attention. It’s ludicrous to think that if you want to share an apartment with a roommate or go to the hospital to give birth, you would have to prove your citizenship, but under these bills, such would be our state’s reality.

As Arizona’s $2 billion deficit continues to grow, the Committee responsible for appropriating our funds has approved increasing the cost burden on hospitals, schools, motor vehicles, cities and counties, and on business owners. These bills are a waste of our time, our money and our resources, and it’s time for our legislators to focus on making Arizona strong, and to implement the real solutions for our state and our children’s futures: health care, jobs, education and public safety.

Business owners, faith leaders, law enforcement, health care workers, school and university employees and everyday community members are speaking out and pushing back, and we will continue to put pressure on the legislature every step of the way until these bills are defeated. Only then can Arizonans be proud to have leaders that actually lead our state.”

Border Action Network formed in 1999 and works with immigrant and border communities in Arizona to ensure that our rights are respected, our human dignity upheld and that our communities are safe and healthy places to live. We are a membership-based organization that combines grassroots community organizing, leadership development, policy advocacy and litigation.

Posted by Prison Abolitionist at 9:26 AM