Hate Watch: A conversation about race divides to conquer. 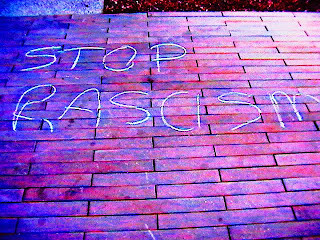 Phoenix, AZ sidewalk the morning after SB1070 went into effect.

Think that FAIR has any interest in the rights of minority citizens? Think again, people - they're a hate group. They just don't wear bed sheets - kind of like the Tea Party. (Funny how big a deal The Patriot Declaration makes of the US Constitution, when it's the AZ Tea Partiers who most want to exempt Arizona from having to follow federal law.) Lots of overlap there, in fact, between Tea Partiers and hate groups. They go to the same rallies, push the same policies, and vote for the same people. They all essentially believe that only they and their descendants are divinely ordained to inherit the earth, not "the Meek" that Jesus always talked about (the meek are bothersome and in the way in capitalist society - unless they're working obediently for menial wages...).


Seems to me that these are the kind of twisted people who damage our national sovereignty and standing in the world, frankly, not immigrants. They help set our collective moral evolution back 100 years. I don't understand how any minorities can vote Republican these days, or why these two folks below have any credibility just because they're people of color. Somos Republicanos especially baffle me. There are wolves herding sheep in there.

Tomorrow, the House Subcommittee on Immigration Policy and Enforcement will hold a hearing at the Rayburn House Building entitled, “Making Immigration Work for American Minorities.” On the witness list are two figures whose views of immigrants are less than charitable: Carol Swain, an African-American professor of political science and law at Vanderbilt University, and Frank Morris, former head of the Congressional Black Caucus Foundation and a board member of the anti-immigrant hate group, Federation for American Immigration Reform (FAIR).


Swain has some very odd views for someone selected to lecture Congress on immigration and minorities. In her 2002 book, The New White Nationalism in America, Swain argued, in essence, that America doesn’t need to reject white nationalists — people who want the U.S. to be run by and for whites. Rather, it needs to start talking to them, and taking their ideas seriously, particularly when it comes to immigration and racial preferences. In the book, Swain says that white people have been muzzled by political correctness, while African Americans are allowed “to verbally assault and slander whites with racial epithets and false charges without suffering any serious loss of respect or any financial or social damage in the public arena.”


In 2009, Swain endorsed a slick 58-minute documentary, “A Conversation About Race,” devoted to proving the thesis that racism is a bogus concept invented to oppress whites. In a blurb that was posted on the documentary’s website, Swain called the film “outstanding” and “meticulously done.” “[I]t offers people of all races a rare opportunity to engage in cross-racial dialogue,” she wrote. “I highly recommend this film for social science courses dealing with race, class, and ethnicity.” When it turned out that Swain’s much-lauded filmmaker had long posted regular comments on YouTube and a number of other websites, repeatedly describing blacks as “monkeys” and black men in particular as “EVIL monkeys [who] are DESTROYING” America, and even suggesting that a black former White House adviser be lynched, “[p]ossibly with the aid of a noose,” Swain continued to heartily recommend the film, with its “poignant” scenes, to “multicultural forums across the country.”


Lately, Swain’s big bugaboo has been immigration. In 2007, Swain published Debating Immigration, which included an essay by prominent white nationalist Peter Brimelow, who runs that anti-immigrant hate site, VDARE.com, named for the first English baby born in America. Swain later served as a paid commentator on “Lou Dobbs Tonight” before he was pushed off the air by CNN for repeatedly demonizing immigrants.


It comes as no surprise that Swain’s written testimony is harsh on immigrants. She accuses “millions of foreign-born persons” of having “openly stolen jobs, goods, and opportunities from law-abiding American citizens.” Dismissing the idea that some of the undocumented might be “good people,” Swain says, “What matters is their choice to enter the country unlawfully and thumb their noses at the laws and regulations that Congress has enacted to protect the people.” Undocumented immigrants, according to Swain, “damage our national sovereignty and standing in the world.”


Frank Morris, perhaps the most prominent African-American anti-immigrant activist of the last decade, will also be testifying at the hearing. Morris has held many positions in groups set up by John Tanton, the racist architect of the modern anti-immigrant movement. For Tanton, American culture requires “a European-American majority, and a clear one at that,” something that Tanton believes today’s Latin American immigrants are making impossible. Morris is currently on the board of directors of FAIR, where he serves alongside Tanton, who founded the group in 1979. Morris is also a board member at the Center for Immigration Studies, which was conjured up by Tanton in the 1980s and started out life as a project of FAIR.


In his written testimony, Morris is completely dismissive of those who have concerns about the increasing level of vitriol and racism — like that exhibited in Tanton’s comments about a majority-white America — in the debate over America’s immigration policies. “It is relevant to note here that charges of racism during immigration debates are always leveled toward those in favor of reduced immigration regardless of their reasons,” Morris writes. Morris is particularly incensed and calls an “error” that “privileged immigrants, including illegal alien immigrants,” whatever that means, are allowed to compare their struggles to the “Black civil rights movement.”


More recently, Morris signed on as a board member with Progressives for Immigration Reform (PFIR), a group devoted to blaming immigrants for environmental problems. In the last few years, key nativist groups have increasingly been taking up this strategy, which is often labeled “greenwashing.” They have spent hundreds of thousands of dollars to run full-page advertisements appealing to liberals in an array of publications. They’ve built a series of websites aimed at “progressive” environmentalists — and many of those sites are run by people who are also principals of right-wing nativist groups.


PFIR, a central actor in this greenwashing campaign, was launched in 2009 with the help of key candidates, including Morris, who tried but failed to take over the Sierra Club board in its 2004 elections. Morris and his compatriots targeted the club in an attempt to turn the organization away from its historic mission of protecting the environment and reorient it towards agitating against immigration. The candidates were all soundly defeated.
Posted by Margaret Jean Plews at 5:05 PM