A few months ago I heard a story in a community forum about the criminalization of people who are mentally ill that troubled me deeply. It was reported that the City of Phoenix was prosecuting a man for disorderly conduct due to his attempt to jump off a bridge when suicidal one day. A month or so before that I was told about a man in another county who had tried to kill himself by jumping into traffic, and was being prosecuted for the damage he did to the car that hit him. Last year the AZ Department of Corrections prosecuted a prisoner for arson who had set himself on fire and was burned over 80% of his body. And state prisoner Tony Lester was prosecuted and imprisoned in the first place for injuries friends incurred while trying to prevent him from cutting his throat in a psychotic state.
All this impressed me as being unnecessarily punitive of individuals who were themselves already victims of suicidal despair and clinical depression, and I have a soapbox set up just for this issue. So when I read about this guy going to prison for killing someone during a suicide attempt, I expected more of the same kind of story. It wasn't. This guy is a real self-absorbed bastard who seems like he'd do or say anything to save his own life.
Now, granted, the prosecution only tells the state's version of a story - that version is the one posted below. If their premise is true, however, then Buot intentionally drove his SUV into an unsuspecting woman's path to hurt his wife by killing himself. That's pretty criminal in my book and deserves prosecution. What this man did was something like firing a sub-machine gun into a crowd while hoping to be taken out by a cop. It was reckless, cowardly, and could predictably end in someone else's grave injury or death.
In the course of his "suicide attempt" (why would he really think he'd die by plowing his huge SUV into another car is beyond me), Buot killed a young mother of three, and lived to lie about it. Good for Bill Montgomery for holding him responsible. I'm not sure I'd send him to prison for the next 22 years, myself - there must be some better way to teach people not to be so careless when so consumed with self-destructive rage that they're driven to risk lives other than their own in the course of acting on suicidal impulse. Lacking that alternative sentencing option right now, though, I'm glad the guy will be off the streets for awhile.
I don't know if Buot has a serious mental illness that impaired his judgement, or if he's just a selfish, manipulative bully. In any case, my heart goes out to the family of this man's victim, Christine Ann Anderson. Condolences to all her loved ones. I still reject the criminalization of mental illness - but I'll remember what happened to Christine the next time I protest the prosecution of someone who endangers others in the course of trying to harm themselves. 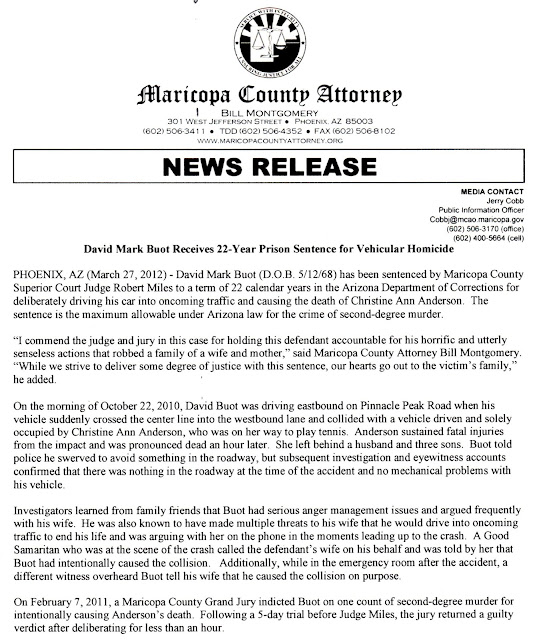