Arpaio's Deaths in Custody: Misogyny back on trial.

This guy Vogel - who should have been taken by the cops to the psych hospital, not to jail, died over ten years ago after fighting off a bunch of guards trying to dress him in pink - and yet they still do this kind of thing to frightened, vulnerable, mentally ill prisoners today.  Apparently when this case first went to court, his trauma from that incident wasn't really fully explored - the 9th Circuit Court seems to think that the use of the pink underwear is indeed abusive, however, and relevant, so it's being returned to the lower courts for a new trial - with Arpaio as the defendant. As articulated by Justice Noonan:
"Unexplained and undefended, the dress-out in pink appears to be punishment without legal justification," he wrote. "It appears to us that this question is still open for exploration at trial on remand."


To use the color pink - long associated with the feminine - as  a means of humiliating male prisoners is pathetic and disgusting and says a lot about not just Arpaio's homophobia and hate for people who are gay/transgender/queer, but his deep contempt for women in particular. How can women with any political awareness at all justify allowing Arpaio and the MCSO to continue like this?
I have a hard time understanding how the women in this state - Republicans and Dems alike - have tolerated Arpaio's misogyny for so long - much less why so many vote for him - except that the women here have been very well-trained to comply. Women's rights organizations in Arizona who aren't actively working to end mandatory the pink underwear in the county jail are as much a part of the problem as Sheriff Joe himself is - they should be supporting this suit. The use of pink - the feminine - as something to abuse people with is not a petty issue - it's a symptom of the toxic attitudes towards people (not just prisoners) that defines the MCSO's culture, and it's killing folks.
For those interested, by the way, the actual court opinion on this is linked to at the bottom of the article. Interesting read. Maybe this guy will be the one responsible for reining in Arpaio's expressions of hate in his policies, anyway, even though it sure won't change the man. 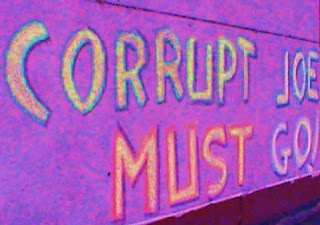 Arpaio Isn't Off the Hook for Death of Schizophrenic Man

(CN) - The 9th Circuit ordered a new trial Wednesday in the case of a schizophrenic Arizona man who had a fatal heart attack weeks after he was forced to put on pink underwear in Sheriff Joe Arpaio's notorious county jail.

Maricopa County authorities stopped 36-year-old Eric Vogel in 2001 while looking for a burglar in his Phoenix neighborhood. Vogel, who had a lifelong history of mental illness and social isolation, had left the home he shared with his mother that morning for the first time in years. When the officers questioned him, he struggled, shouted "kill me" and said he needed to talk to the president. The deputies arrested him and booked him in Arpaio's jail for assaulting a police officer. Vogel was transferred to the psychiatric unit after he told a psychologist that he was at the World Trade Center and getting messages from satellites, but not before being subjected to a "dress-out" in which four officers forced the struggling inmate to change into pink underwear and other jailhouse garb.

Vogel spent a week in the unit before his mother bailed him out. A short time later, he was in his mother's car when she had a traffic accident. Police at the scene warned Vogel that there was a warrant out for his arrest for spitting on an officer during the "dress-out." Vogel left the scene and ran for approximately 5 miles. He died the next day of acute cardiac arrhythmia.

Vogel's mother sued Maricopa County and Arpaio for violating federal civil rights law and other statutes, including the Americans With Disabilities Act. Yavon Wagner, Vogel's sister, stepped in as the plaintiff when her mother died shortly before the trial.

Vogel allegedly thought he was being raped by the officers, and that they were dressing him in pink underwear as some sort of preparation for a "gang rape." Vogel had been obsessed with the humiliating jailhouse incident, and that the lingering trauma of the dress-out had contributed to his death, according to the complaint.

At trial, however, Senior U.S. District Judge Earl Carroll barred Wagner from testifying about her brother's state of mind, finding it hearsay. He also prohibited mention of "rape," "gang rape," and "pink underwear," finding no evidence that Vogel had known the underwear he was forced to wear was indeed pink. The court also limited expert testimony as to the possible effects of the dress-out and about an alleged connection between schizophrenia and cardiac arrhythmia. At the trial's end, "the District Court abruptly eliminated the plaintiff's opportunity for rebuttal argument," according to the ruling. A jury found for the defendants.

But the 9th Circuit voted 2-1 on Wednesday to reverse the verdict and order a new trial. The San Francisco-based panel found that the lower court had committed a fatal error by limiting the plaintiffs' testimony, and had done so again by refusing to consider the psychological implications of pink underwear.

"Indisputably, Wagner could have testified at trial about the impact the jail incident had on Vogel, how his mood was following the incident, how disturbed he seemed, and even what he thought happened to him during the incident, all without putting inadmissible hearsay before the jury," Judge John Noonan wrote for the majority. "None of this testimony would have been put forth in order to establish the truth of what he had said. Wagner proposed to testify about how extremely delusional Vogel was following the incident, and more importantly, the emotional impact the incident had on him, including how humiliated he now felt by the pink underwear. She was not asserting the truth of anything that Vogel said had happened to him in jail."

Because of the "symbolic significance" of the color pink in American culture, the jury should have been permitted the jury to consider the "impact of the dress-out on Vogel apparent from his conversation with his sister," the panel found.

"When a color of such symbolic significance is selected for jail underwear, it is difficult to believe that the choice of color was random," Noonan wrote. "The county offers no penalogical reason, indeed no explanation whatsoever for its jail's odd choice. Given the cultural context, it is a fair inference that the color is chosen to symbolize a loss of masculine identity and power, to stigmatize the male prisoners as feminine."

"That Vogel was delusional does not mean that he was incapable of seeing," Noonan added. "If you pricked him, he bled. Just as his eyes saw the pink, so his mind made the association of the color. So at least a jury could infer from the impact of the dress-out on Vogel apparent from his conversation with his sister."

Noonan suggested further that the District Court may want to consider the legality of Arpaio's underwear rules on remand.

"Unexplained and undefended, the dress-out in pink appears to be punishment without legal justification," he wrote. "It appears to us that this question is still open for exploration at trial on remand."

Writing in dissent, Judge N.R. Smith argued that the majority had failed to "correctly construe the hearsay rule," and had neglected to give "the proper deference to the District Court's other evidentiary rulings."

Neither John Curtin, who represented the plaintiffs, nor Maricopa County's attorney, Eileen GilBride, could be immediately reached for comment.

Link to Court Opinion
Posted by Margaret Jean Plews at 11:04 AM