Now that Az Department of Corrections Director Chuck Ryan has lowered the standards that members of his execution team need to meet in order to kill another human being, it should be much easier for him to reduce the state prison population. It's no surprise that he went this route to reduce the number of people he needs to lock up instead of improving access to substance abuse treatment or the quality of re-entry programs for those returning to the community. After all, this is the man who had a dentist (Michael Adu-Tutu) direct his medical program and a podiatrist at Perryville "treat" women now dying of cancer who could have been cured.

Perhaps if not for the way he treats all his other prisoners I'd believe some sense of duty to dispensing "justice" drove his correctional policies, but I've seen so many prisoners die behind bars who were only sentenced to prison for a few years that it's hard to believe that justice has anything to do with this. With our pervasive disregard for all of human life in AZ, it's no wonder the ACLU and Prison Law Office had to intervene in this place... 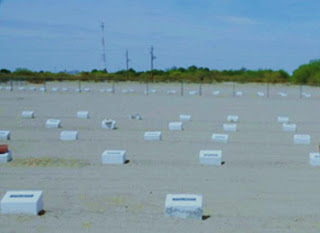 AZ on pace to match busiest year for executions

With two executions already carried out so far this year and two more up for consideration next week, Arizona is on pace to match its busiest year for executions since establishing the death penalty in 1910 and be among the busiest death-penalty states in the nation, The Associated Press has determined.

If the Arizona Supreme Court approves of two more death warrants on Tuesday, and if the state carries out three additional executions of inmates likely to be at the end of the appeals process well before year-end, that would make seven executions for 2012.

That would match the 1999 total, the most ever in the state.

“We’re having a big year,” said Andrew Clemency, a public defender who specializes in death penalty cases in the Phoenix area and teaches about the subject at Arizona State University. “Arizona is becoming a major player in the death-penalty world, right up there with places like Texas or Georgia or Florida.”

If Arizona puts seven inmates to death this year, it could become the second-busiest death-penalty state after Texas. Last year, Alabama executed the second-highest number of inmates at six.

Clemency attributed Arizona’s recent uptick to a coincidence in the timing of appeals being exhausted. But he also tied it to Arizona’s reputation as a conservative state in which politicians can win favor by supporting the death penalty.

“We’ve always kind of had a healthy appreciation for the death penalty here in Arizona,” he said. “It’s been sort of a part of our legal system forever, going back to the Old West days.”

Shari Silberstein, executive director of the anti-death-penalty group Equal Justice USA in New York, said Arizona appears to be bucking a national trend that has seen many states move away from the death penalty.
The drop in Texas executions to 13 last year, for example, is down from 24 in 2009.

“Arizona is kind of out of step with where the rest of the country is going on the death penalty,” Silberstein said. “It is concerning. It says that Arizona is not looking at the facts that everyone else is recognizing.”

Executions nationwide have decreased steadily since they hit an all-time high of 98 executions in 1999 and have averaged at 44 a year since 2007, according to the Death Penalty Information Center.

In the past five years, four states have repealed the death penalty — New Mexico, Illinois, New Jersey and New York. Governors in those states cited cases of innocent people being executed, and said the system was expensive and ineffective at deterring murder.

Oregon Gov. John Kitzhaber said in November that he’ll never allow another execution in his state under his watch, calling the system “compromised and inequitable.”

Other states still have the death penalty on their books but simply don’t enforce it.

Silberstein credited high-profile exonerations of men on death row as putting a human face to errors in the system, and thus beginning a change in public opinion.

As of January this year, the Death Penalty Information Center reported that 140 inmates on death row have been exonerated in 26 different states since 1971, mostly through DNA evidence or confessions from other people.

Arizona has executed two inmates so far this year — Robert Henry Moormann on Feb. 29 and Robert Charles Towery on March. 8.

On Tuesday, the Arizona Supreme Court will consider whether to approve death warrants for Samuel Villegas Lopez, 49, and Thomas Arnold Kemp, 63. If approved, their executions would be scheduled to be carried out in late April or early May.

Lopez was convicted of raping, robbing and stabbing a 59-year-old woman to death in her Phoenix apartment on Oct. 29, 1986, after what court records described as a “terrible and prolonged struggle.”

Kemp was sentenced to death for kidnapping a 25-year-old college student from outside his Tucson apartment on July 11, 1992 and robbing him before taking him into a desert area, forcing him to undress and shooting him twice in the head.

The three other inmates whose executions could be scheduled this year are Daniel Wayne Cook, Richard Dale Stokley and Edward Harold Schad.

Cook was scheduled to be executed April 5 for killing a man and a teenage boy in 1987 in Lake Havasu City after torturing and raping them for hours, but the U.S. Supreme Court put the execution on hold until it rules on Cook’s claims of ineffective counsel during post-conviction proceedings. A ruling is expected by the end of next month.

Both Stokley and Schad recently lost appeals in the 9th U.S. Circuit Court of Appeals in San Francisco and could see their executions scheduled within months if the U.S. Supreme Court declines to review their cases, which is mostly likely.

Stokley was convicted in the kidnapping, rape and murder of two 13-year-old girls who went missing from a camp-out in Elfrida in southwestern Arizona on July 7, 1991. Stokley’s friend, Randy Brazeal, was convicted of second-degree murder in the killings and was released from prison last year.

Schad was convicted of killing a 74-year-old Bisbee man in August 1978 after robbing him.

Arizona Assistant Attorney General Kent Cattani said about 50 other inmates were nearing the end of their appeals in the 9th Circuit and would likely be executed within a year of whenever they’re turned down. That sets the stage for dozens of executions in the next few years in Arizona.

Some of those cases have moved slowly through the court system over the course of decades.

“I’m not sure why it has taken as long as it does,” Cattani said. “From the state’s perspective, it’s something that could move more expeditiously.”

Since 1910, Arizona has executed 93 inmates; 28 of them have been put to death with lethal injection since the state began using that method in 1992. The state executed 28 inmates by hanging from 1910 through 1931, and 37 inmates by lethal gas after that.

Altogether there are 128 inmates still on Arizona’s death row.
Posted by Margaret Jean Plews at 7:44 AM