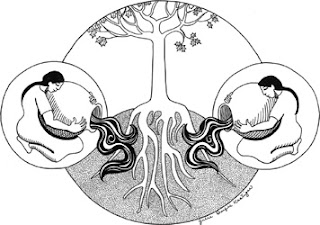 "A disturbing trend has emerged in Tribal and state courts. Women are being criminally charged
with “failure to protect” under child abuse, child neglect, or child endangerment statutes solely
because of the violent, criminal actions of their abusive partners. Under the laws and practices of
many jurisdictions, women with children may be criminally prosecuted for failing to leave their
abusers or failing to report or to seek help for the abuse that they and their children suffer.

The criminal justice system has developed an expectation that battered women with children must
leave their abusers (even when no resources exist in the community to assist them in leaving) in
order to protect the children. Failure of a battered woman with children to leave her abuser may
result in criminal prosecution, incarceration, and/or termination of parental rights...

There are significant policy and legal implications of prosecuting battered women for “failure to
protect” their children. For some battered women, the most “protective” choice they can make for
their children is to stay in an abusive home. The reality is that many battered women lack the resources
to feed, clothe, and shelter their children once they leave their abusive partner. Many batterers
are highly lethal and will stalk and kill their partners and children if they leave. Making an
attempt to escape a violent home may actually increase the risk of injury or death for a battered
woman and her children. Careful safety planning and preparation can take time but will ultimately
provide a battered woman with her best chance at safely leaving an abusive home and keeping her
children safe.

Laws and polices that encourage the prosecution of battered women for “failure to protect” do not
accomplish their stated goals. These laws and policies discourage women from reporting abuse for fear that they may be prosecuted or lose custody of their children. By closing off an avenue of intervention
and assistance for battered women, these laws and policies make it less likely that these
women will be able to safely leave their batterers and keep their children safe. Finally, laws and
policies that seek to hold a battered woman responsible for the abuse meted out by her batterer
represent a grave injustice that flies in the face of one of the fundamental principles underlying
criminal justice—that persons should be held criminally responsible only for actions for which they
are culpable."

Maze of Injustice: The Failure to Protect Indigenous Women from Sexual Violence in the USA
Amnesty International (2007)