This poor man's murder was preventable - and horrendous. Condolences to his loved ones. I hope you make CCA and the State of Hawai'i pay - it's the only thing that seems to make these people change how they abuse and neglect other human beings. If you need the support of other prisoners' families surviving similar traumas, please let me know (Peggy Plews 480-580-6807 prisonabolitionist@gmail.com). I am in Phoenix, AZ. 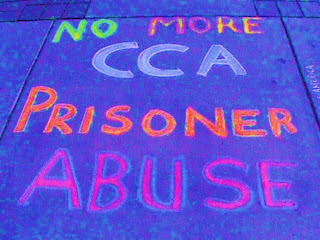 February 15, 2012
By acluhawaii
Today the family of Bronson Nunuha, a 26-year-old Hawaii prisoner who was brutally murdered at a Corrections Corporation of America (CCA) (NYSE:CXW) private prison in Arizona in 2010, filed a lawsuit in state court against CCA and the State of Hawaii.  The suit exposes CCA’s business model of grossly short-staffing prisons and cutting corners in every way possible to make its private prisons profitable.  These systemic practices violated fundamental safety requirements and subjected Hawaii prisoners to rampant gang violence in under-staffed prison units.  Bronson Nunuha was just months away from release on a burglary conviction when CCA forced him to share housing with extremely violent, gang-affiliated prisoners in the same unit.  A copy of the complaint is here.

“Bronson’s death was senseless and preventable.  CCA and the State of Hawaii needlessly put him in danger,” said attorney Kenneth M. Walczak, who, along with the Human Rights Defense Center and the ACLU of Hawaii, represents the Nunuha family.

“Private prisons are known to have higher levels of violence due to understaffing and high staff turnover that result from their goal of generating ever-greater profits,” added HRDC director Paul Wright. “But prison companies are not allowed to make profit more important than human life.  Unfortunately, CCA’s desire to turn a corporate profit needlessly cost Bronson Nunuha his life.”

Bronson was transferred to CCA’s Saguaro Correctional Center in Eloy, Arizona as part of a controversial practice in which Hawaii prisoners are sent to for-profit mainland facilities. He was serving a 5-year sentence for burglary and property damage when he was killed by other prisoners. Bronson, who was only months away from completing his sentence and returning to his family on Oahu, left behind a grieving mother, sisters, and his seven-year-old son.

Under Hawaii law, the State was required to return Bronson to Hawaii when he had only a year left on his sentence so that he could complete necessary programs to help him re-enter the community.  The State ignored this law.

Bronson was murdered in CCA’s “Special Housing Incentive Program,” or SHIP. The SHIP program places rival gang members and prisoners who do not belong to any gang together in one unit, where they share recreation time and sometimes the same cell.  Predictably, this practice results in violent incidents like Bronson’s murder. Only one CCA employee was present to oversee approximately 50 prisoners in the SHIP unit where Bronson was housed.

While at the CCA prison, Bronson had asked to be removed from the SHIP unit but CCA staff denied his requests.  On February 18, 2010, two gang members attacked Bronson in his cell; the cell door had been opened by a CCA employee, who then left. Bronson was beaten and stabbed over 100 times. His assailants carved the name of their gang into his chest and even had time to leave his cell, shower and change clothes before CCA staff knew that Bronson had been killed.

One of Bronson’s assailants, Miti Maugaotega, Jr., had previously been involved in several attacks on other prisoners at a different CCA prison. Maugaotega, a gang member, was serving multiple life sentences for attempted murder, rape, and armed robbery. CCA and the State knew that Maugaotega was dangerous and capable of extreme violence but still housed him in the same unit as Bronson, a non-violent offender close to finishing a 5-year sentence.

CCA prisons that house Hawaii prisoners have been plagued with problems. In addition to Bronson’s murder, another Hawaii prisoner, Clifford Medina, was killed at the Saguaro facility in June 2010. In 2009, Hawaii removed all of its female prisoners from CCA’s Otter Creek Correctional Center in Kentucky following a scandal that resulted in at least six CCA employees being charged with rape or sexual misconduct. Other Hawaii prisoners have sued CCA, charging that the company has tolerated beatings and sexual assaults in its mainland prisons, and for refusing to allow them to participate in native Hawaiian religious practices.

“Why the State of Hawaii continues to contract with this company is mystifying, frankly,” said Wright. “After two murders, disturbances, allegations of rampant sexual abuse and a lack of accountability by CCA employees, it’s fairly obvious that CCA is unable or unwilling to safely house Hawaii prisoners, and the State is unable or unwilling to adequately monitor conditions at mainland prisons. Hawaii taxpayers are certainly not getting what they’re paying for.”

ACLU of Hawaii Senior Staff Attorney Dan Gluck added, “the ACLU has long warned the State about the damaging effects of its short-sighted policy of shipping prisoners to the mainland. This tragedy is bound to be repeated unless Hawaii adopts more effective prison policies.”

Bronson’s family is represented by the San Francisco law firm of Rosen, Bien & Galvan, LLP, by HRDC chief counsel Lance Weber, and by the ACLU of Hawaii’s Dan Gluck.  The attorneys ask anyone with information about Bronson’s death – or information about violations of other safety rules at the CCA Saguaro Correctional Facility – to contact them.
###