ASPC-Tucson Suicide: Why did Victor Romero-Sangria, 30, give up and die? 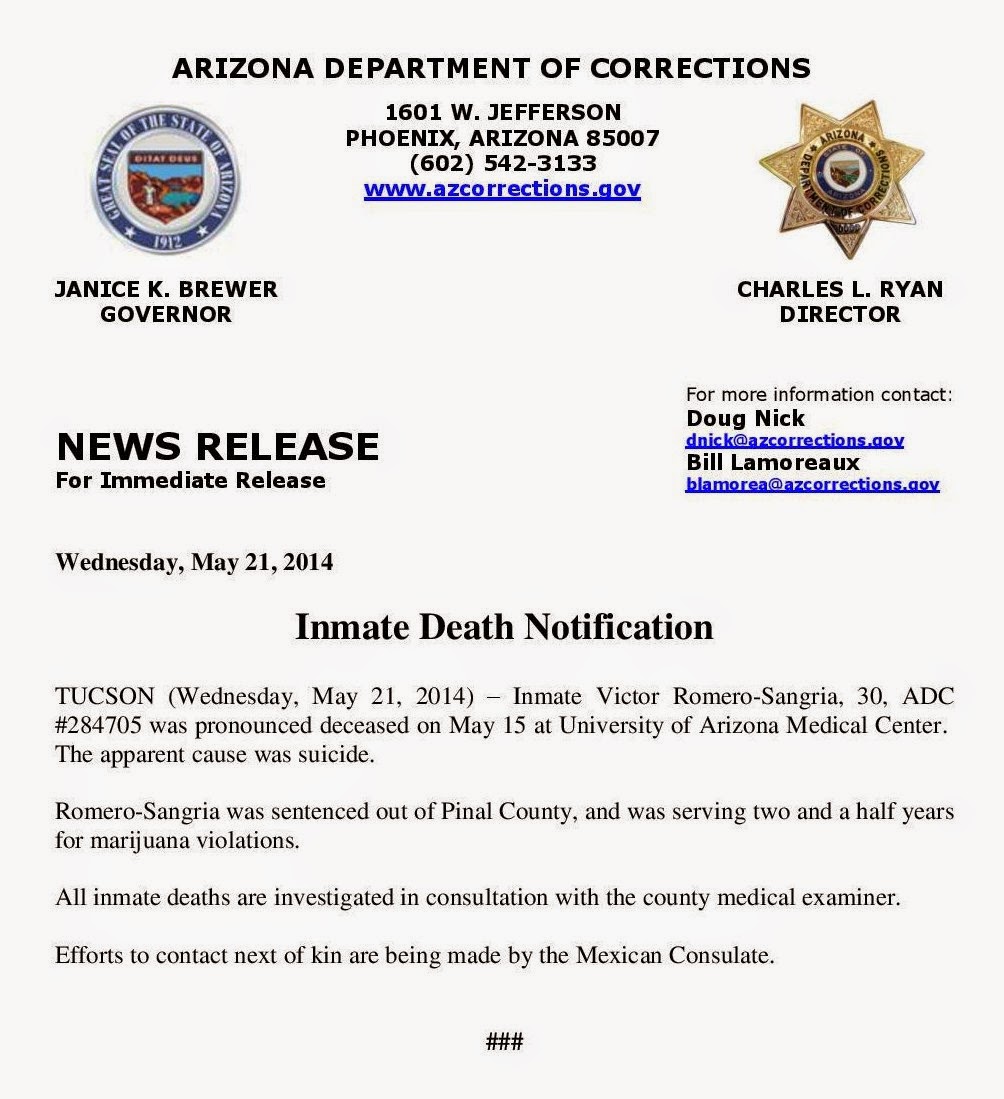 30 year old prisoner Victor Romero-Sangria was sentenced out of Pinal County last fall to spend 2.5 years in prison for marijuana violations...I really cant believe we still put people in prison for pot, but we do. He arrived in the custody of the AZ DOC on 10/02/13. He apparently killed himself less than 8 months later. If anyone knows why, please contact me.

Here's what I suspect, based on what I see in his record on-line, and have heard from hundreds of prisoners. This is just a guess...

I suspect Victor arrived in prison with "bad paperwork" - ie, his police report would show he snitched. Or perhaps he was gay, and someone outed him. Or maybe he just didn't like to play by the racialized political rules. Or maybe he was raped - after you've been raped once in prison, you're an easy target for repeated victimization, if word gets out about it.

In any case, I think this young prisoner  feared a fate worse than the death he could bring on himself, and that he begged the AZ DOC to be placed in protective custody. They denied his request because he couldn't afford an attorney and - being  a Mexican National - they knew he (or his family, now that he's dead) was hardly likely to ever sue the DOC for an injunction.

Despite whatever danger this man faced and begged for relief from, the DOC most likely ordered him onto a General Population yard, where he would have to report to the head of his race to be approved to walk the yard or found to be "no good", and targeted for violence and exile. He was terrified, and refused to go out on the yard. That's when they gave him a ticket for an AGGRAVATED REFUSAL Of AN ORDER...(Refusal to House, or RTH ticket for those of you just picking up the jargon). Then they would have taken his property and privileges, adding points to his classification score, and stuck him in the hole for being afraid. That's what it looks like happened on November 14, 2013, anyway. 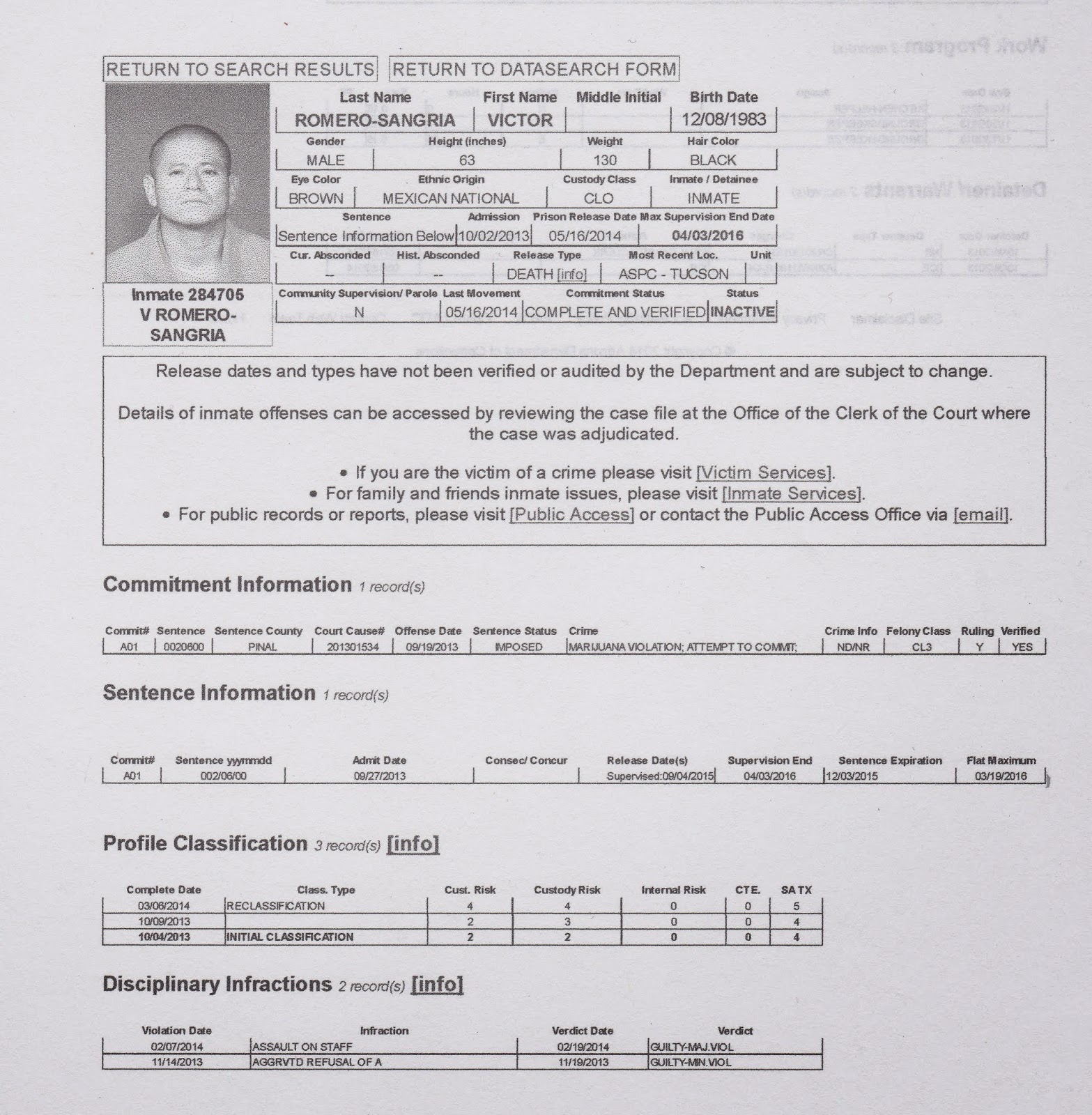 Next thing that shows up on Victor's inmate file on the DOC website is an assault on staff on February 7, 2014. My bet is that whatever got him into hot water with the gangs that dominate the lives of Mexican national prisoners was something he was offered a chance to "clear his name" over. The only way to do that is to commit a crime for the gang, usually an assault on another prisoner or an officer. Another possibility is that he thought if he attacked an officer, he would be placed in solitary for the rest of his time in prison, and that it wold keep him safe.  In any case, he assaulted an officer which could have gotten him more time, so he must have been pretty afraid.

He probably sought PC again after that assault in February, and was denied again - perhaps even the day he died. That drives many men to try to kill themselves at the DOC.

Or the Mexican Mafia or Border Brothers actually got a hold of him and just made it look like a suicide. Many homicides in prison are hidden that way and the DOC lets them slide, like in the case of Pete Calleros. HIs mother had a second autopsy done which proved he was strangled by attackers, and the DOC had more than one witness who reported he had been murdered and the suicide was staged....strangely, the DOC never told his mother they knew it wasn't a suicide. I suspect there's less liability involved if a prisoner commits suicide than if they've been murdered in your care. So, if you want to know the truth about your loved one's death in custody, do your own investigation- don't believe everything the people responsible for their safety tells you.

At least that's how it goes down far too often - I'm just speculating about this kid's life and death right now; I could be way wrong. My condolences to Victor's family - please contact me if there's anything I can do to help you.


If anyone else knows what really happened, drop me a line, please, too.

Posted by Margaret Jean Plews at 9:01 AM