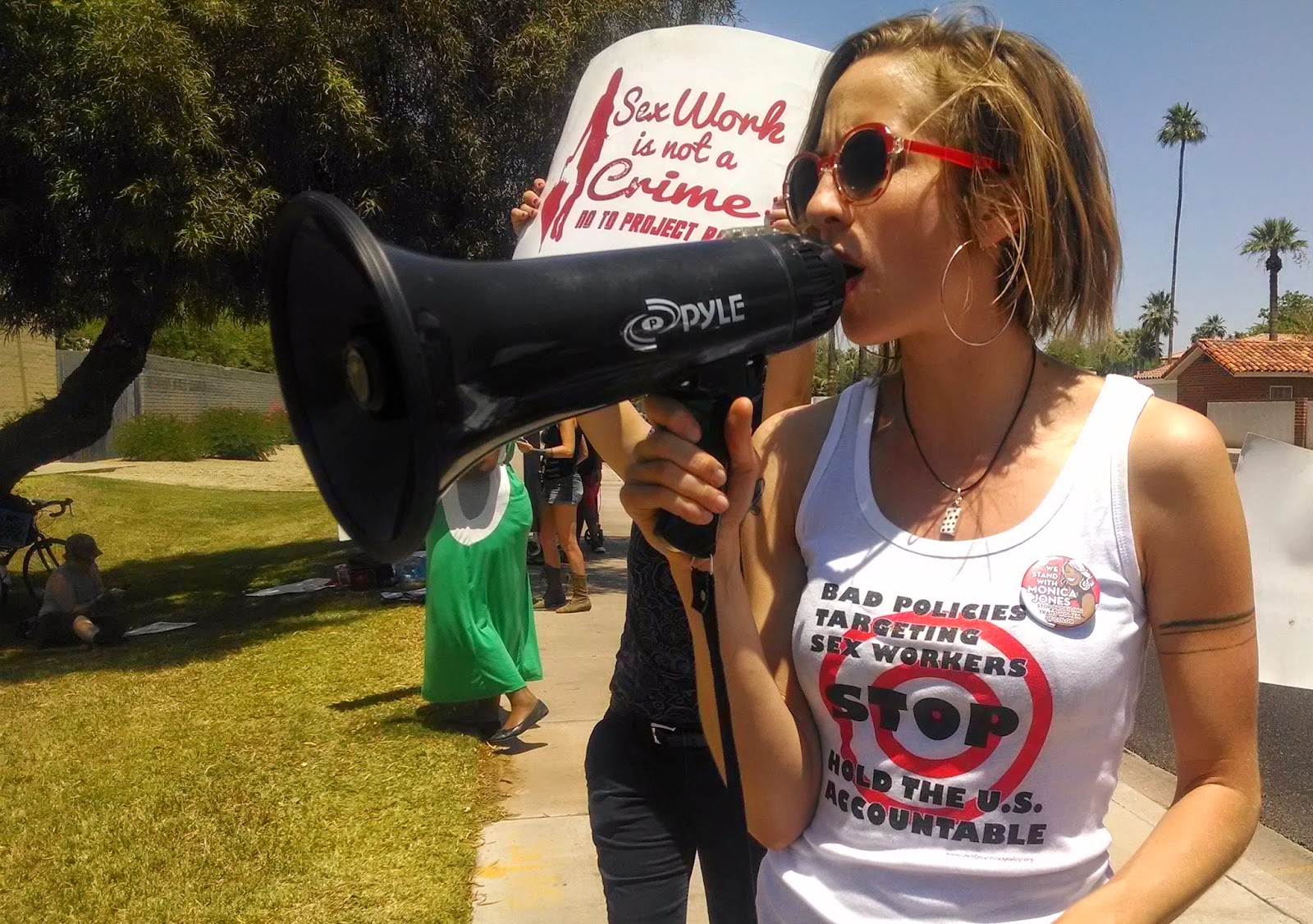 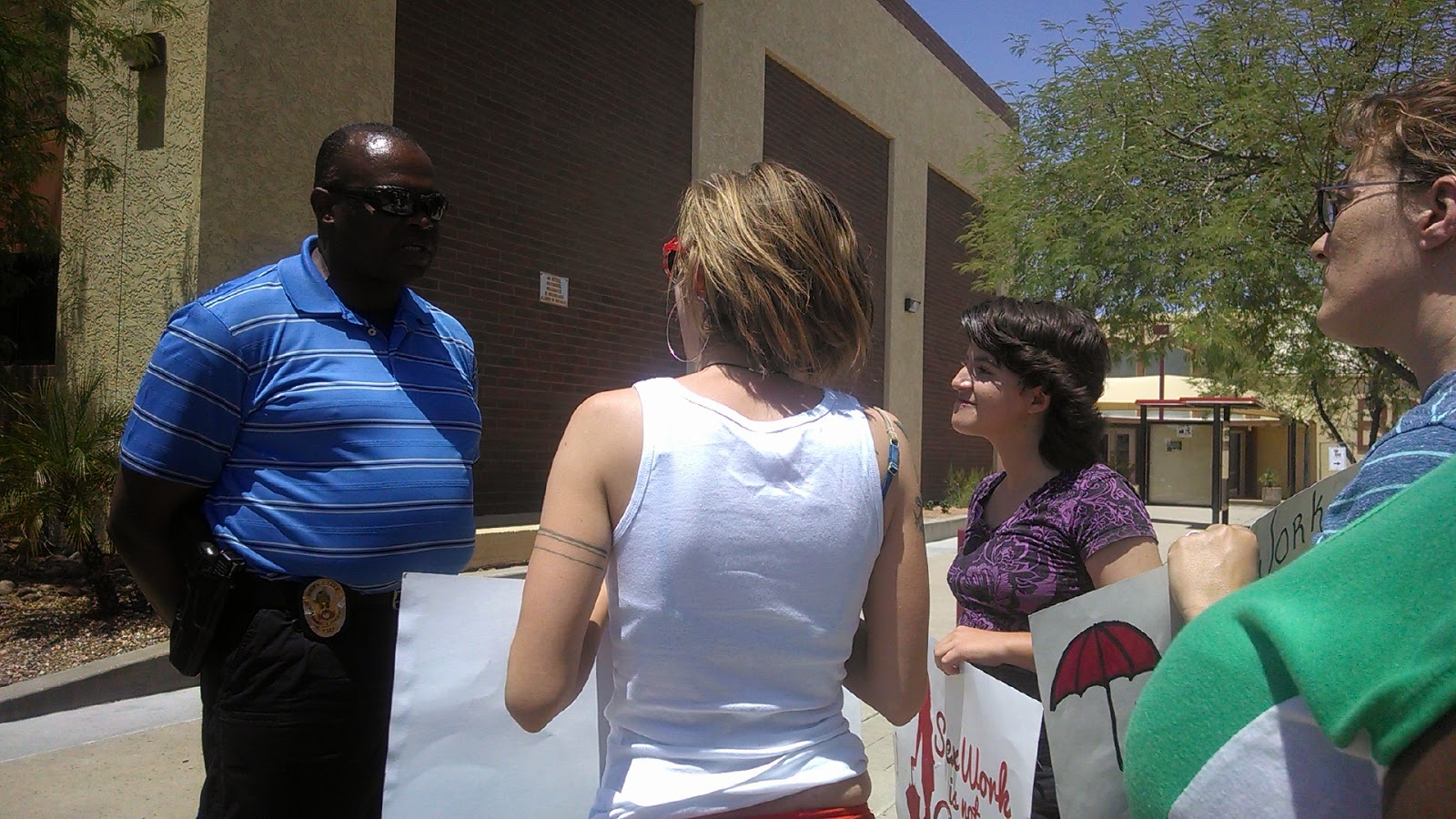 Yesterday community members carrying information and harm reduction supplies were threatened with arrest and were not allowed to communicate with sex workers (and people profiled as sex workers) who had been detained by police and forcibly transported to Project ROSE.  Project ROSE is run twice a year and is a collaboration between the Phoenix Police, the ASU School of Social Work, and local social service agencies.  Project ROSE and policing of sex workers in Phoenix in general have come under intense scrutiny because of a long list of rights violations documented by local community representatives. In March 2014, advocates from the Best Practices Policy Project and SWOP Phoenix traveled to the United Nations to raise concerns about these abuses to the Human Rights Committee during the review of the United States under the International Covenant on Civil and Political Rights (ICCPR). 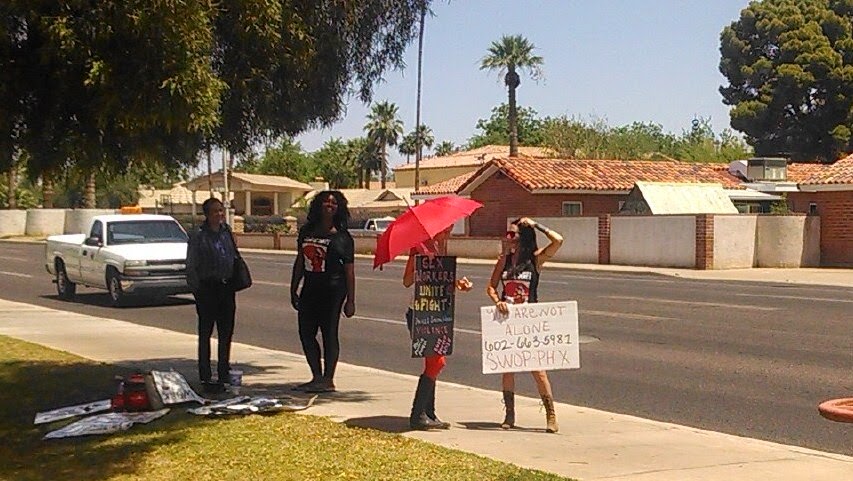 Organizations in Arizona are continuing to sound alarm bells about the rights violating detentions carried out by Project ROSE. Yesterday, protesters chanted “Rights! Not rescue, rights!” at the entrance to Bethany Bible Church where people caught up in the raids are forcibly transported in handcuffs to “diversion services.” Jaclyn Dairman-Moskal of SWOP Phoenix explained yesterday in a statement released by SWOP Phoenix, there appears to be nothing voluntary about the “services” at the Project ROSE location. ““Project ROSE coordinators claim this program offers voluntary diversion,” noted Ms Dairman-Mosal, “[But] … the program creates a coercive environment, using jail as a threat to intimidate people into participation.” She further explained that, “Over 30% of people picked up in Project ROSE are not even eligible for diversion, and face accumulating criminal charges as a result of these raids. This program is a way to fill jails, not to help our community.”


Local organizations are continuing to seek support for comprehensive, rights-based programs for sex workers, and an end to criminalization. Nationally a group of social workers, Social Workers United for Justice, is petitioning the National Association of Social Workers (NASW) and the Council on Social Work Education (CSWE) to “demand an end to Arizona State University School of Social Work’s involvement with Project Rose” because it violates socials work’s core professional principles. Last year two social workers described in an editorial in Afilia–a journal of women and social work--how Project ROSE violates the ethical and professional standards of both the NASW and CSWE.

SWOP Phoenix’s full press release of May 15, 2014 is available below. 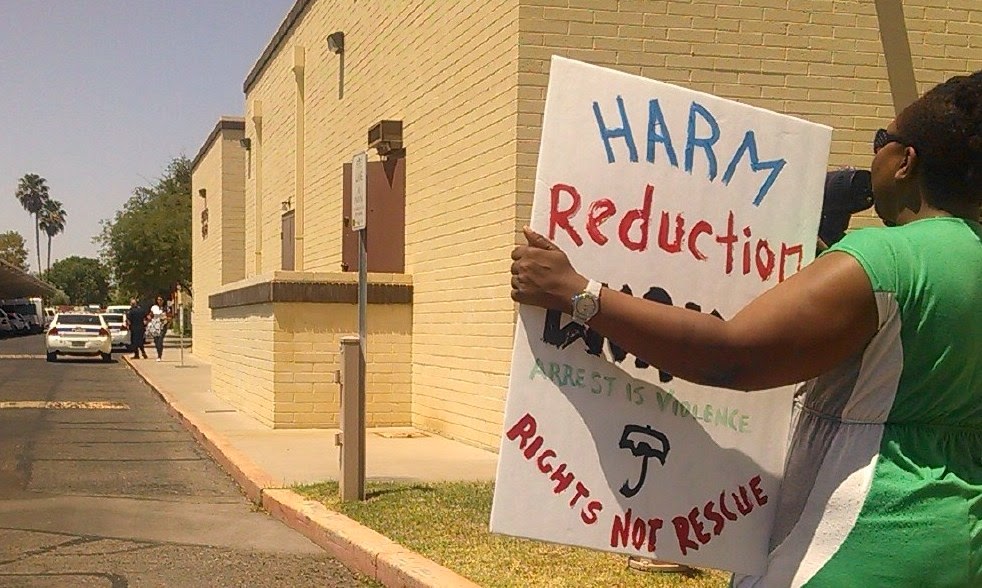 Community Responds to 2-Day Prostitution Diversion Program, a Collaboration between the ASU School of Social Work and the Phoenix Police
What: Rally and Protest at site of Project Rose
When: Thursday, May 15, 2014 at 11:00 am
Where: Bethany Bible Church, 6060 N. 7th Ave
Who: Sex Workers’ Outreach Project (SWOP) Phoenix and supporters

PHOENIX – This Thursday, sex workers and allies return to the site of the Project ROSE Prostitution Diversion Initiative to protest a program that has become a source of growing public debate as people swept up in Project Rose resist felony charges. Twice a year, the Phoenix Police, the ASU School of Social Work, and local social service agencies collaborate to bring sex workers and people profiled as sex workers to the Bethany Bible Church. Under the guide of rescue, adult workers are forced to choose between a 6-month diversion program and criminal charges.

The Sex Workers’ Outreach Project (SWOP) Phoenix is a group of sex workers and allies fighting for self-determination based on the idea that sex work is work and working is not a crime. Programs like Project ROSE ignore the fact that many people who work in the sex industry are not victims in need of rescue, but consenting adults who should not be arrested, coerced into diversion, or incarcerated for working. SWOP Phoenix also recognizes that sting operations like Project ROSE aim to bring in a large number of people, often relying on preconceived notions about who sex workers are, primarily targeting women in poverty, trans women, and women of color.

Over the past year, Project ROSE has come under national and international scrutiny by independent and mainstream media, including Aljazeera America, The Huffington Post, The Nation Report, and Truth Out. The United Nations Office of the Special Rapporteur has also been monitoring Project Rose as an example of racial and gender police profiling.

“Project ROSE coordinators claim this program offers voluntary diversion. Quite the opposite, the program creates a coercive environment, using jail as a threat to intimidate people into participation,” explains Jaclyn Dairman-Moskal of SWOP Phoenix. “Over 30% of people picked up in Project ROSE are not even eligible for diversion, and face accumulating criminal charges as a result of these raids. This program is a way to fill jails, not to help our community. We need real solutions, such as comprehensive, rights-based programs for sex workers, and an end to criminalization.” 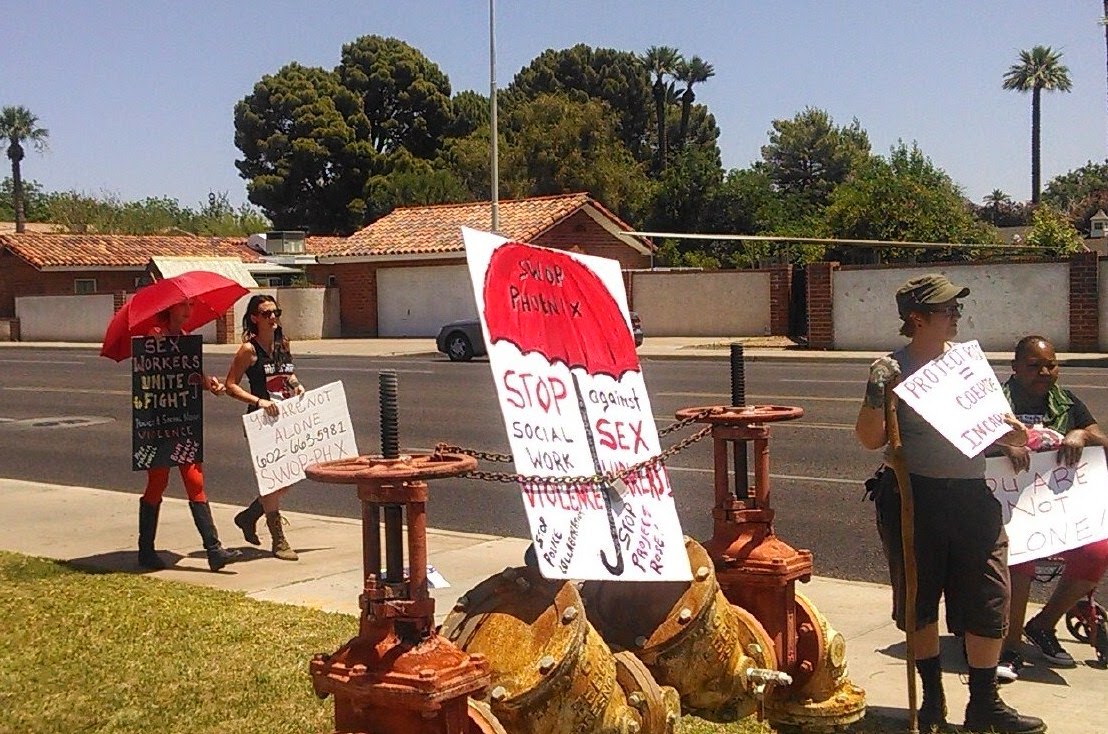 To learn more about Project ROSE and the work of SWOP Phoenix, click here