Guilty of walking while trans in Phoenix: Activist Monica Jones. 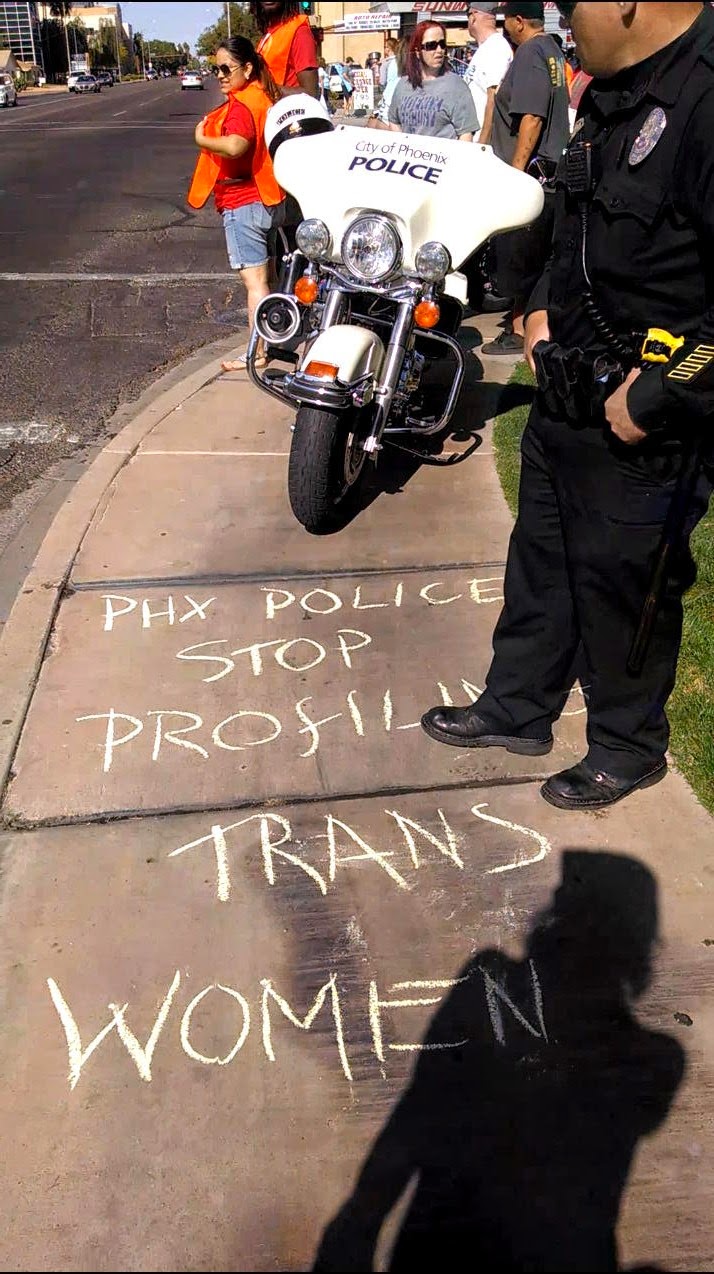 At the 2014 Phoenix Pride Parade
this cop actually threatened to arrest me for chalking him-
which means he was ready to put me in cuffs and drag me off against my will,
and could have legally killed me if I resisted or tried to flee.
Hell, he'd probably get a promotion for killing me.
Anyway, how is it that cops think arresting people isn't violent?
Moreover, how could all these social workers and community non-profits
dedicated to serving marginalized people
stand by and not call that out as violence as well?


I will save my comments for a separate post in which they won't be directly linked to  SWOP-Phoenix or Monica Jones, because I don't speak for either and I won't be as polite as this press release is about the injustice I witnessed today. Monica, however, was an awesome witness and advocate for human rights in court today, and is dealing with the verdict with more grace than I could ever hope to muster.

Blessings to all the good friends who turned out to support today, and those around the world who have been raising hell about the violence that is ASU's Project Rose!

Oh, and come to this talk on April 17th with all your questions and concerns for the ASU school of Social Work. The talk is by the architect of Project Rose; what a fitting conclusion to ASU"s "2014 Humanities Lecture Series", as we all have so much to learn from her.

"Dominique Roe-Sepowitz will conclude the spring 2014 Humanities Lecture Series at ASU’s Downtown Phoenix campus with her presentation, “Sex Trafficking In Arizona.” Hosted by the School of Letters and Sciences, the lecture starts at 6:30 p.m., April 17, at the Walter Cronkite School of Journalism and Mass Communication, room 128, 555 N. Central Ave., Phoenix." (https://asunews.asu.edu/20140409-az-sex-trafficking-lecture)

See you all there!

PHOENIX--- Over 50 supporters rallied in front of the Phoenix Court house this morning in support of ASU student and anti-1062 activist Monica Jones. Ms. Jones was facing unjust charges of “manifestation of intent to prostitute,” a vague and discriminatory law that criminalizes activities like waving at cars, talking to passersbys, and inquiring if someone is a police officer. The ACLU of Arizona joined Jones’ lawyer in contesting the constitutionality of the manifestation statute. Dan Pochoda of the ACLU explained in his arguments, “The statute eviscerates first amendment rights.” In a packed courtroom filled with supporters wearing “I Stand With Monica Jones: Stop Profiling Trans Women of Color” t-shirts, the judge found Ms. Jones guilty based solely on the statements of the police officer who targeted Monica for her race and gender. Supporters across AZ and the nation are in an uproar about the injustice of this ruling.

In Arizona and across the country, trans women of color like Ms. Jones are routinely profiled and swept up in the criminal justice system on prostitution-related charges, due to a phenomenon many call “Walking While Trans”---a widely held belief by law enforcement and others that all transgender women are criminals.  Because of the injustice that leads people to take pleas against their best interest due to lack of community support, Ms. Jones decided she was going to fight the charges, so that no more trans women, sex workers, or people profiled as sex workers would have to face these injustices. Ms. Jones has remained adamant about her innocence, and that sex workers need rights, not arrests. Ms. Jones stated after the verdict, “As an African American and as a woman, the justice system has failed me.”

In light of this devastating ruling, SWOP Phoenix (Sex Worker Outreach Project) and Monica Jones will fight the case in an appeals process, while building national and international momentum against unjust policies that target trans women, people of color, and sex workers. SWOP Phoenix is calling on people from around the country to keep demanding justice for Ms. Jones. Meanwhile, the UN Special Rapporteur on Human Rights Defenders is monitoring the trial as an example of discriminatory policing and retaliation on activists organizing for human rights.

Ms. Jones states, “I am saddened by the injustice that took place at my trial this morning, but we are not giving up the fight. It’s time that we end the stigma and the criminalization of sex work, the profiling of trans women of color, and the racist policing system that harms so many of us.”
Posted by Margaret Jean Plews at 7:39 PM