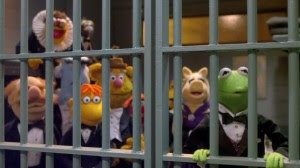 Much has already been said about Sesame Street's "Incarceration Toolkit" - particularly what a shame that it's become this "normal" in America to have a parent go to prison. I want to know why they didn't do this 20 years ago, myself - this phenomenon of mass incarceration in America isn't new. Perhaps this is a sign we may be getting ready to end the madness, though.

The best commentary I've seen so far about the project on the web actually comes out of TIME magazine - and is below. Who I really want to hear from are the kids and families this is supposed to help, though - so please go check out this project, families with children who have parents in prisn, and write to me about what you think (arizonaprisonwatch@gmail.com)

(Troubling FYI: according to COLORLINES, one of the main funders of this project is a defense contractor that uses prison labor...) 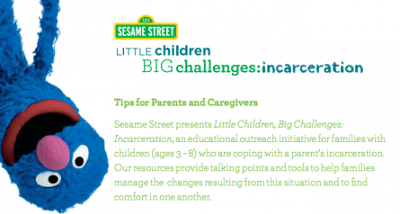 TIME Magazine
By Maia Szalavitz
June 13, 2013
Nearly 2 million American children— one quarter of them too young to go to kindergarten— now have a parent in prison or jail.  To help the littlest ones cope, Sesame Street has just released a toolkit for families faced with losing a parent for what can be years or even decades, including a video featuring a Muppet whose father is locked up.  It is titled “Little Children Big Challenges:  Incarceration.”


The effort to aid youngsters grapple with such a traumatic situation seems admirable, but it raises bigger questions. How did we get to the point where, as Reason’s Mike Riggs recently put it in a post on the toolkit, America has made it “almost normal to have a parent in prison or jail”?  And should we really see better tips for caregivers of children with incarcerated parents as the best way to mitigate the harm?
Research shows that incarceration does incredible damage to families, doubling the odds that children will later be homeless, increasing the risk for aggressive child behavior problems by 33% and the risk for severe psychological distress such as depression or anxiety in childhood by 20%.

It can hinder school performance and induces all of the trauma of other separations like divorce, but with the added element of shame, guilt and stigma.  Not to mention the financial strain losing a parent indefinitely imposes and the massively increased odds of winding up in foster care it causes.

Moreover, having a parent in prison is listed by researchers as one of the “adverse childhood experiences [PDF]” that can add up to serious health consequences in adulthood:  the greater the number of these experiences, the higher the odds of diabetes, obesity, high blood pressure, stroke, addictions, smoking and all mental illness.

As usual, Sesame Street’s brochures and programming are well-designed and sensitive to the issues they address. Leavened by the familiar fuzzy faces of Grover, Big Bird and Cookie Monster, they offer tips for caregivers such as maintaining a reassuring routine and being sensitive to and accepting of whatever emotions the child may have. One emphasizes developmentally appropriate honesty about the situation, saying:

Be patient as your child works to understand what has happened. You may need to explain the situation several times. Let him know he’s not alone.

But maybe, while we provide these band-aids for now, what we really need is a rethink of our entire criminal justice system, one that has become not only the nation’s biggest holding cell for people with addictions, but also its largest psychiatric system— albeit one that only rarely provides evidence-based treatment for either addictions or other mental illnesses.

Consider the facts. America, the world’s largest jailer—with 25% of the world’s prisoners and just 5% of global population— has a murder rate more than double that of most countries in Western Europe.  That means we incarcerate around five times more people per capita than most those countries do, with roughly half their success at cutting crime.  We also use drugs at rates that equal or exceed those of other Western democracies, while having some of the harshest laws, supposedly to prevent this.

We now lock up 10 times more people for drug offenses than we did in the early 80s; and while some drugs have gotten less popular, others have become more so, leaving us with roughly the same rate of severe addiction. Further, 48% of all state prisoners are nonviolent and at least half of their crimes are either drug crimes or directly related to drug use.  92% of all federal prisoners are nonviolent, with a full 48% sentenced to federal prison because of drug offenses.

That’s not to mention the financial costs, which include not just the obvious $6.2 billion spent annually on federal prison and $39 billion yearly on state prisons and the many further billions in policing costs (arrests for marijuana alone cost nearly $3.6 billion a year), but also costs in terms of employment opportunities missed and other investments like education deferred.

A tremendous amount of this incarceration is unnecessary and could easily be reduced by decriminalizing drug possession, legalizing marijuana, sentencing nonviolent offenders to house arrest and monitoring and only using prison to lock up those whose crimes genuinely warrant it for appropriate amounts of time.

Of course, what looks obvious from a policy perspective seems almost impossible politically. Perhaps one clue to the depth of problem can be found in the funding for the Sesame Street initiative itself.  As the Atlantic reports, one of the major funders is BAE, a major defense contractor that uses prison labor paying workers pennies an hour to cheaply manufacture some of its products.  It’s great that Sesame Street gets the support it needs and that BAE is willing to give— but the economics of the prison industry are difficult to disrupt.

If we were to try to revise this sorry situation, a great deal of money and jobs would have to be shifted away from locking people up and profiting from their incarceration.  We’d have to spend instead on healthcare, childcare and various other types of treatment. That would certainly be a big challenge— but nothing compared to the challenges faced by the children Sesame Street is targeting with its new toolkit.

Posted by Margaret Jean Plews at 10:01 AM