I've been hearing, of late, that the AZ DOC Protective Custody yards are as violent as the GP yards now - this guy was just murdered in PC this week, on the Bachman Unit.

I'm currently compiling a report on the violence in the state prisons to submit to the US DOJ and ask for their intervention in the way of a federal investigation about policies and practices since Charles Ryan took over that have resulted inthe escalating level of violence and despair at the AZ DOC. If anyone has any information about this homicide or any other act of violenc ea tthe AZ DOC,  please send it my way (Peggy Plews) at arizonaprisonwatch@gmail.com.

Here's the DOC's news release. Condolences to this prisoner's family, if there's anyone left out there for him. 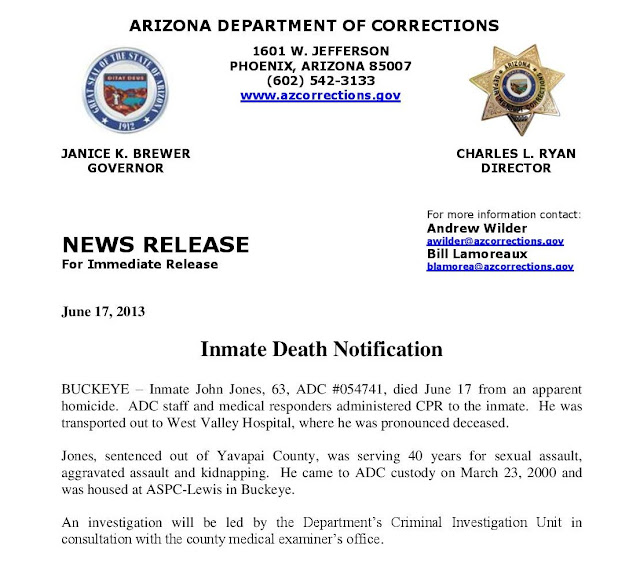 received a copy of this interesting email yesterday...

I was  sorry to learn about the apparent murder of Inmate Jones at the Lewis prison.   As you know, I recently contacted you about some serious security concerns that I noted when I visited the Lewis Prison as an agent of an attorney.  You have not responded to my email on that topic.

While my observations about lapses in security at Lewis Prison and the murder of Mr. Jones may not be connected at all,  I am especially concerned about what I consider to be a lackadaisacal attitude toward security at the Lewis Prison.

Today,  I examined Mr. Jones' inmate internet record.  I note that he had several disciplinary infractions, the most recent being just a year ago (unless there are more that are not recorded on the website) which reflect that this man apparently was given disciplinary for "refusal to house."  Often, inmates who are seeking protective custody (frrom gangs, drug or gambling debts, after having snitched on another prisoner, and for many other reasons) will be denied protective custody and issued a disciplinary ticket for refusal to house (in general population).

Is this issue one that relates to the apparent homicide of Mr. Jones?  Has he been seeking protective custody but, instead, been moved to "alternative placement" with DNHW (Do Not House With) names added to his file as the "remedy"?  If so, it would seem that this method did not suffice to protect him.

Please consider this a standing request to examine the public records documents (written, electronic, video and by any other means collected)  on the investigation into this man's death.  Please have your staff notify me when the records are available for my review at the Central Office.