The state might as well have just executed Dale Hausner when he asked them to...which I guess the DOC did oblige him on, in the end. He was suicidal and being treated with an anti-depressant, which they conveniently gave him in large enough quantities to overdose on...this isn't the first death row prisoner this year to go this way, either. Seems the CORIZON mental health team assigned to death row has been falling down on the job since day 1.

this is one piece on why some death row prisoners prefer suicide... 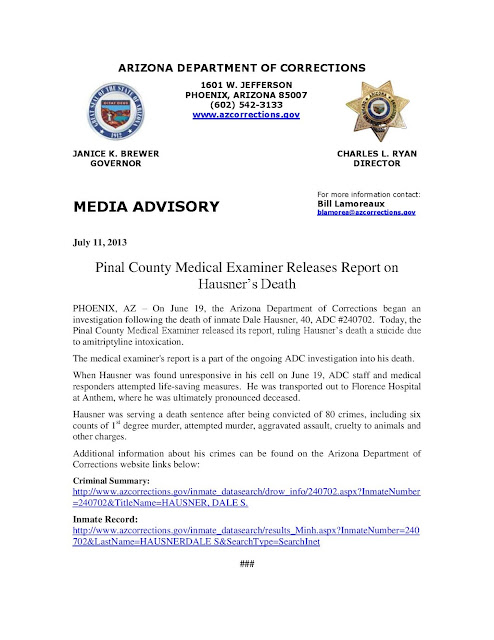 Most of the time, when a prisoner dies, my condolences go to his or her family.  But my thoughts are with the victims and survivors of this man's crimes, as well - even if his death is celebrated by some, such events can bring up painful memories. I still object to the death penalty, but not because I don't find violence like this to be contemptible. Still, there's some suggestion in his remarks thathe felt remorse and hoped his death would help survivors heal...that's really interesting.


When I talk about abolishing prisons and what that future might look like, just how communities would deal with the kind of harm this man perpetrated is the sort of thing that still stumps me. That doesn't mean the project of abolition should be abandoned, though - the prison industrial complex is destroying us. I believe in holding people more accountable than I think the criminal justice system often does, anyway - not less. Letting people run amok hurting others isn't what prison abolition is about.

Here's a good lead-in to what abolition IS about, though. It makes a lot of sense...


I don't know how this man died yet - he looks pretty sickly in his DOC mug shot - but if he killed himself, he'd be the second guy on death row in just over a month to have done so. Interestingly, he recently asked the Arizona Supreme Court to hasten his execution. The article regarding that is below.

That said, I'm investigating the homicides and suicides in Arizona's state prisons - which have doubled under the current administration - and would appreciate any information anyone out there has about how Hausner died. Please contact me (Peggy Plews) at arizonaprisonwatch@gmail.com  or 480-580-6807. 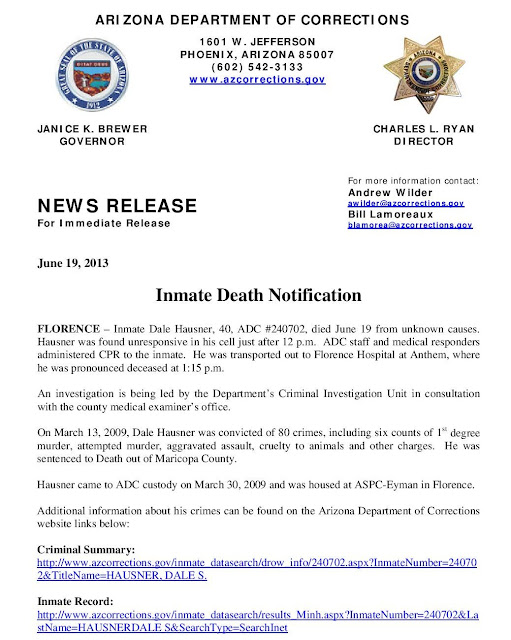 
PHOENIX (AP) -- An Arizona serial killer on death row wants the media barred from a hearing on whether he is mentally competent to waive further appeals so he can be executed as soon as possible, his lawyer said Friday.

Court-appointed attorney Julie Hall made the disclosure during a hearing without explaining why Dale Shawn Hausner wants reporters and cameras kept from the April proceedings in Maricopa County Superior Court.

Judge Roland Steinle will hear from Hausner and mental health experts at the hearing.

The judge intends to hold a separate hearing for media organizations to object.

Hausner was convicted of six murders and numerous other crimes in a series of random shootings in the Phoenix area in 2005 and 2006. Victims included pedestrians, bicyclists and animals.

During an automatic appeal for Hausner in July, the Arizona Supreme Court upheld the death sentence and all but out one of his 80 convictions.

Hausner then asked the justices to set his execution date. He said he wanted to forego further appeals -which could take years to resolve - and to represent himself in any court proceedings. The state high court ordered the Superior Court to determine Hausner's competency to waive appeals.

Hausner didn't acknowledge guilt during his trial but told the jury before sentencing that he should be sentenced to death "to help the victims heal."

He was allowed to not present evidence for leniency in sentencing after Steinle ruled he was competent to make that decision.

Hausner, Hall and a state prosecutor participated by phone in Friday's hearing. Hall did not immediately respond to messages later in the day.

A Phoenix crime author who wrote a book about Hausner's case said Hausner "loves the media" because of the attention it provides him. But he successfully fought to keep secret the psychological evaluation report prepared for the previous competency ruling, author Camille Kimball said.

"He did not want his childhood explored and any psychological records revealed at that time," Kimball said. "He does not want people to know what his childhood was like."

A lawyer for a group that advocates for open government said there were no compelling reasons to bar the media from the upcoming hearing.

"There's no jury to influence, or anyone, for that matter," said attorney Daniel Barr of the First Amendment Coalition. "The public's interest in Dale Hausner's fate is extremely high."

The attorney general's office said it will have no position on Hausner's request until his lawyer files a written motion.

The office's general position is that all such proceedings should be open to the public, but there could be extraordinary circumstance allowing a court to privately consider information, spokeswoman Amy Rezzonico said.

Also during Friday's hearing, Hall reiterated Hausner's desire to keep his in-person court appearances at a minimum. Hausner has expressed concern about his safety in Maricopa County jails, where he was previously assaulted.

In a letter submitted to the court, he also expressed concern about a court-appointed expert's ability to provide the judge with an honest and professional report.

Hausner said the expert needs to put aside her expressed opposition to the death penalty. Hausner also said the expert told him that his body language indicated that he's depressed, which Hausner disputed.

Steinle told Hausner that he was confident that questioning of the expert in court would detect any bias and that Hausner himself would be heard.

"I will have a colloquy with you," Steinle told Hausner.
Posted by Margaret Jean Plews at 9:35 PM