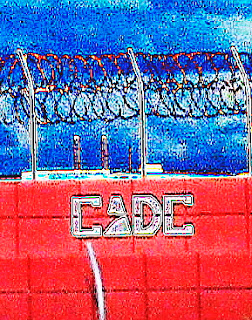 30 Years of Corrections Corporation of America:

This year, Corrections Corporation of America (CCA) is celebrating 30 years of profiting from incarceration. People around the country say, 30 years of abuse, mismanagement, and political influence peddling is nothing to celebrate.

It’s time for the people of Arizona to say: 30 years is enough.
CCA, go away!

Please join us for a demonstration and press conference
to protest CCA’s prison profiteering in Arizona:

Here in Arizona, CCA operates 6 facilities, holding prisoners from Arizona, California, Vermont, and Hawaii as well as federal prisoners. CCA is one of the main beneficiaries of harsh immigrant enforcement and detention policies, such as Operation Streamline.

A publicly-traded company, In 2010, CCA saw record revenue of $1.67 billion, up $46 million from 2009.
CCA spends millions on lobbyists and campaign contributions, and has strong ties to the Governor’s office. CCA has given money to Governor Brewer’s past campaigns such as Prop 100 and stands to benefit greatly from SB1070. As more undocumented people are turned over to ICE it is likely that they will be sent to one of CCA’s three detention facilities in Arizona.

Former Arizona Senator Dennis DeConcini, prominent attorney and member of the Arizona Board of Regents, also serves on the CCA Board of Directors, personally profiting from CCA’s dividends.

Check out our blog:  www.tucsoncitizen.com/cell-out-arizona
And join us on facebook:  http://www.facebook.com/group.php?gid=177122610652&ref=ts
Posted by Margaret Jean Plews at 9:22 AM