APRIL 17 UPDATE: (this anonymous DOC worker had some caustic things to say about prisoners in addition to this account of the Morey strike, but I have no reason to doubt his version of events. It's consistent with a couple of other things I've heard of late, too...)


if anyone knows more, please contact Peggy at
480-580-6807 or
arizonaprisonwatch@gmail.com.

"The  disturbance at the Morey Unit on 04/09/2013 happened because the kitchen crew was replaced. The kitchen crew was warned on no less than five occasions that if equipment kept being damaged... they would be replaced. The damaging of the ice machine (which only benefits the inmates) was proverbially the last straw. The Morey inmate leaders were informed that the kitchen crew were being replaced by lower security level GP inmates from the Bachman kitchen, and that they were not PC (protective custody) inmates. This happened days before said disturbance.

The disturbance started when inmates refused to exit the chow hall so the next house could eat. Ex-Morey kitchen workers stirred things up by claiming that the replacement kitchen workers (you called them scabs?) were PC inmates. The kitchen workers were locked in a storage room by a CO for their own safety. At this point inmates semi rioted, tearing apart what they could of the chow hall and outer building area. Chemical agents and canines were brought in to quell the situation. Some staff were injured, but it was minor..." 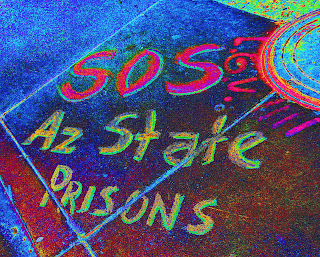 
The following narrative of the AZ DOC's version of what's happening in our prisons was hardly on par with the AZ Republic's otherwise thoughtful treatment of prison issues, and doesn't even acknowledge other recent such prison "disturbances" http://arizonaprisonwatch.blogspot.com/2012/09/aspc-tucsonsanta-rita-september-prison.html and all out race riots of late http://azprisonsurvivors.blogspot.com/2013/03/aspc-tucsonwhetstone-race-riot-update.html.

Hmm. I certainly wonder why the prisoners are protesting so loudly - especially since they don't seem to be fighting each other this time and have apparently turned their frustrations against the state.

Or maybe it's all the suicides http://azprisonsurvivors.blogspot.com/search?q=suicide+arizona+corrections and the abuse of mentally ill prisoners they're upset about http://freemarciapowell.blogspot.com/2010/09/marcia-powell-no-human-involved-appeal.html . Or maybe its the overall indifference to human life that underlies the class action suit about gross medical and psychiatric neglect http://azprisonsurvivors.blogspot.com/2013/02/suing-arizona-parsons-v-ryan-should-be.html

Could also be the plans to build a new Supermax prison http://arizonaprisonwatch.blogspot.com/2013/03/stop-brewers-supermax-dungeons-hardly.html...

If you decide to file grievances instead, guys, here's a little help...

Write to me if you want to expose prison abuse and neglect, too!


from the AZ Republic, a sadly superficial report coming a day late and a dollar short...

A “chemical agent” like pepper spray was used by correctional officers to quell a disturbance this week involving approximately 40 inmates at the Arizona State Prison Complex-Lewis in Buckeye, an Arizona Department of Corrections spokesman confirmed.

Bill Lamoreaux, the department’s spokesman, said the inmates refused to leave the dining hall in the Morey Unit and began to damage property after 8 a.m. Tuesday.

The disturbance lasted about five minutes. Lamoreaux said the inmates were brought under control, cuffed and taken away.

Minor injuries were suffered by an undisclosed number of staffers and inmates, Lamoreaux said.

The Arizona Republic and 12 News were first notified of the incident by a confidential source who said a riot had occurred. Lamoreaux said the source’s characterization was untrue.