Hooray for the Maricopa County NAACP!!!! I encourage every prisoner's family out there to thank them and (if you can swing it) join them - they're always on this prison business, out at public hearings, legislative committees, everywhere they can head these people off.

From their site: "If you need to speak with a member of the Executive Committee in person, to ensure that a representative is available to address your concern, please call 602-252-4064 to schedule an appointment before visiting our Branch Office."

Both the Rev. Oscar Tillman, Board President, and Dianne Post know a lot themselves about what's going on with the AZ DOC, if you need to target your correspondence there.

As a talking point, folks, remember my friend "C", sitting in Supermax as we speak - though being threatened now with being returned to general population despite multiple requests for protective segregation, which they continue to punish him for. ***

***(JUNE 7, 2013 UPDATE:  My friend "C" was re-classed back down to a 4/4 and moved to a level 4 GP yard from the Supermax, apparently as of 5/20/13. For his safety, in light of that, I'm removing identifying infomration about him. His request for protective custody has clearly once again been denied. I think he was probbly happier -or at least felt safer - in the Supermax than where he is now, which is an especially scary place. Think good things for my friend, people. I think he's being set up to be hurt by the AZ DOC for being so outspoken...)***

The legislature and governor are really being made fools of by the AZ Department of Corrections these days - they're packing that place full of medium security prisoners like C just to justify building a new one: our next Supermax will be based on a Superlie.

If any of that distrubs you, PLEASE contact your legislators!  Find them here, and reach them here, along with the House minority leader, Rep.Chad Campbell: 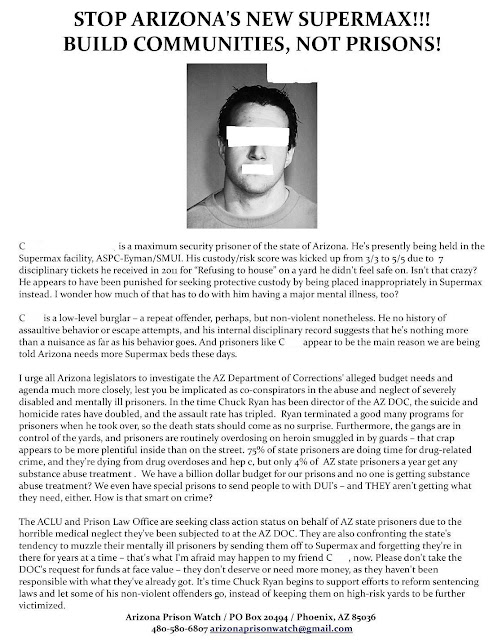 Finally, hit this petition at change.org. You don't need to be an architect to object to the design of places for torture. From the petition site:

Architects/Designers/Planners for Social Responsibility (ADPSR) is asking the American Institute of Architects to amend its Code of Ethics and Professional Conduct to prohibit the design of spaces for torture and killing. In the United States, this comprises the design of execution chambers and super-maximum security prisons (“supermax”), which inflict torture through long-term solitary isolation. As people of conscience and as a profession dedicated to improving the built environment for all people, we cannot participate in the design of spaces that violate human life and dignity. Participating in the development of buildings designed for torture and killing is fundamentally incompatible with professional practice that respects standards of decency and human rights. AIA has the opportunity to lead our profession in upholding human rights....

The petition itself reads:

To: American Institute of Architects (AIA)

Prohibit the design of spaces for torture or killing in the Ethics Code.

As people of conscience, we believe that architects should not participate in the design of spaces that violate human life and dignity. The profession of architecture is dedicated to improving the built environment and protecting the health, safety, and welfare of all people. Participating in or allowing the development of buildings designed for torture and killing is fundamentally incompatible with professional practice that respects standards of decency and human rights. We urge AIA to amend the Code of Ethics and Professional Conduct to prohibit the design of spaces intended for execution or for torture or other cruel, inhuman, or degrading treatment or punishment, including prolonged solitary confinement.

The Maricopa County Branch of the NAACP filed a complaint on Friday, April 12th with the Arizona State Board of Technical Registration requesting that the Board conduct an investigation of the architectural firm that has been awarded the proposal pursuant to State of Arizona Bid Solicitation: ADSPO13-00002006 for professional design services for design and construction administration of a 500 bed maximum security prison.

The maximum security prison, also known as a “supermax” (short for “super-maximum security”) prison, is a “control-unit” prison or section which house inmates who are  considered high security risks.  According to the National Institute of Corrections, “A supermax is a stand-alone unit or part of another facility and is designated for violent or disruptive inmates. It typically involves up to 23-hour-per-day, single-cell confinement for an indefinite period of time. Inmates in supermax housing have minimal contact with staff and other inmates.”  Here in Arizona there are currently “supermax” prisons in Florence and Tucson.

The NAACP argues that the proposal violates the Administrative Code and Rules of Professional Conduct of architects because the duty to the client (Arizona Department of Corrections) conflicts with the duty to the public and presents a serious threat to public health, safety or welfare. The proposal violates the Rules of Professional Conduct because it violates human rights, is discriminatory, shows disregard of the rights of others, endangers public safety, is not environmentally sustainable, and ignores the responsibilities of architects to others including the public and prisoners.

The prison discipline study, a mass national survey assessing formal and informal punitive practices in U.S. prisons, concluded that “solitary confinement, loss of privileges, physical beatings” and other forms of deprivation and harassment were “common disciplinary practices” that were “rendered routinely, capriciously and brutally” in maximum-security U.S. prisons. The study also noted receiving “hundreds of comments from prisoners” explaining that jailhouse lawyers who file grievances and lawsuits about abuse and poor conditions were the most frequently targeted. Black prisoners and the mentally ill were also targeted for especially harsh treatment.

The National Religious Campaign Against Torture (NRCAT) recently began describing supermax conditions as torture. Many studies have documented the detrimental psychological effects of solitary confinement, such as hallucinations, paranoia, and panic attacks. For NRCAT, the term ‘prolonged solitary confinement’ is equated to torture – the point when the use of solitary confinement results in severe mental or physical pain or suffering.

American judges have recognized solitary confinement of the mentally ill as equivalent to torture in the Madrid v. Gomez case because supermax prisons produce a syndrome characterized by “agitation, self-destructive behavior, and overt psychotic disorganization. … “primitive aggressive fantasies,” paranoia, and hallucinations. The U.S. has been criticized by Amnesty International, Human Rights Watch, American Civil Liberties Union and the U.N. Committee Against Torture for our use of supermaximum prisons and in particular isolation that may be cruel, inhuman or degrading treatment or punishment.

On April 3rd Arizona ACLU and American Friends Service Committee sent a letter to Governor Jan Brewer opposing the building of new supermax prison beds.  The letter begins by saying “We write on behalf of all Arizonans who oppose the state’s plans to build 500 additional maximum security prison beds, using $50 million from mortgage settlement funds. We are convinced that this is the wrong direction for Arizona.”

Maricopa County Branch NAACP stated in recent press release, “Many states are closing their supermaximum prisons because they realize how ineffective and inefficient they are. Only Arizona is moving to build more of this 1900 century technology. To do so violates the principles of the architects code of ethics and professional responsibility and should be stopped.”
Posted by Margaret Jean Plews at 1:10 PM