Disregard the old post below - Here's the October 1, 2014 UPDATE on Graves v Arpaio: 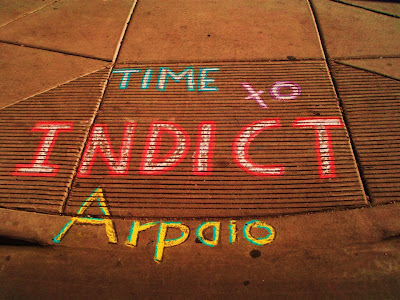 Unfortunately, there are more than a few minor issues with the county jails that remain unresolved. There continues to be a culture of abuse among MCSO officers and a larger CJ system which minimizes such behavior, a poison which seeps from the top on down. The conditions in the jails today - particularly the medical neglect and the abuse that the mentally ill have been subjected to - are still unacceptable. Even I didn't get my medications in jail.

Sadly, that won't be likely to change much until Arpaio is out of there and someone who respects human and civil rights is in. We'll see if this electorate has it in them to do better than him next time around.

The inmates, jails and sheriff have all changed since a class-action lawsuit was filed over county jail conditions 34 years ago, but ongoing concerns kept the lawsuit alive.

That legal action, which over time changed the way Maricopa County holds and treats inmates, appears finally to be coming to an end - if the Sheriff's Office can attend to a few minor issues in the next few months.
Attorneys for inmates and the Sheriff's Office scheduled to present their cases to a federal judge last week in the decades-old fight canceled the hearings after lawyers on both sides agreed they were close enough to resolving a final few issues that they did not need to go before a judge.

"If, in fact, we do what we intend to do, it should be done - no hearing, nothing," said Jack MacIntyre, a sheriff's chief deputy.

It would be a milestone. For years, county jails have been subject to court-ordered oversight to ensure that inmate conditions improved. While a separate piece of the lawsuit targeting Correctional Health Services - a taxpayer-funded agency that provides constitutionally mandated health care to inmates - will continue under court oversight, the fact that the rest of the Sheriff's Office's jail operations could emerge from oversight is significant.

If the Sheriff's Office can, by early March 2012, increase the caloric intake of inmates, address overcrowding in a holding facility and prove there is proper sanitation, the agency will emerge from court oversight. Those requirements were part of an amended judgment issued by a federal judge.

"We're pleased to see that the sheriff is agreeing to cooperate and resolve and come into compliance with the second amended judgment," said Sharad Desai, an attorney representing the inmates.

Advocates say it has been a long time coming.

Three inmates held in the First Avenue Jail brought the original lawsuit against then-Sheriff Jerry Hill in 1977, asking a federal court to intervene over conditions they claimed were "degrading, inhuman, punitive, unhealthy and dangerous."

The unsentenced inmates complained in court filings of cold food that could contain glass or spit and meat that was sometimes uncooked or dropped on the floor and served for dinner; of rodents and insects living in 136-square-foot cells with up to eight inmates who weren't allowed to shower for days; and of going days, weeks, even months without seeing the sun or getting the chance for recreation.

Patrick Schiffer was a young attorney at the time working in a Community Legal Services office when he took the case in 1979, and while he calls the case the most fun he has had as a lawyer, he also recalls the horrid conditions.

"They had 8-by-21-foot cells with eight people and a toilet at the end, so only about three guys could stand up at a time and they spent 24 hours a day in there because the day rooms between the cells were stacked with mattresses," he said.

Schiffer's work on the case also made him skeptical about the county's commitment to change the jail system. Correctional Health Services' ongoing court oversight and Arpaio's inclination to make life hard on inmates leave Schiffer wondering about the effect of the court orders to improve conditions over the years.
"That's been the problem from Day One of the judgment," Schiffer said. "They don't follow what they promise to do. They do some of it."

The condition of jails in Maricopa County was not unique at the time.

In the early 1970s, federal judges began getting involved in cases about prison conditions at the state and county levels, and what they found was shocking, said Michele Deitch, an attorney and University of Texas professor who served as a court-appointed monitor in Texas prisons.

By the mid-1980s, nearly 40 states were operating all or parts of their prison and jail systems under some sort of court order, she said.

"A lot of these problems were invisible for a long time. I think there were abuses in these facilities for many, many years. A lot of it was sort of swept under the rug," Deitch said. "When all the testimony about these conditions started coming out, they couldn't be ignored. So judges started imposing remedies to fix these conditions."

Many of the cases, including Maricopa County's, took decades to resolve because it took years to get funding, build new facilities and change the culture of jail systems to meet the court-ordered remedies, she said.

A federal judge first issued guidelines on legal compliance for Maricopa County jails in 1981. That judgment was amended in 1995. Then in 2001, the Sheriff's Office tried to terminate the judgment under the Prison Litigation Reform Act, which states that decrees on jail conditions are up for dismissal after two years unless inmates can show their constitutional rights are being denied.

That led to U.S. District Judge Neil Wake's 2008 ruling that unconstitutional conditions persisted in the county's jails. Wake issued a second amended judgment, which the Sheriff's Office is now trying to prove it has complied with.

Despite the long-running legal battle and the millions spent to litigate the case, MacIntyre said the lawsuit has had a lasting impact on jail operations.

It played a role in the county's decision to seek funding for new jail facilities, including the Lower Buckeye and Fourth Avenue jails, and caused detention officials to closely examine the way they treat and house inmates, he said.

"There's certainly been some benefit from that. But it's time," MacIntyre said. "The system has benefited from it, but it's time to return all the management back to the Sheriff's Office."

Posted by Margaret Jean Plews at 9:08 AM