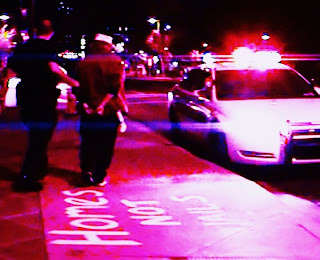 I complained to the Phoenix Police today about being handcuffed and perp-walked Wednesday morning while exercising my First Amendment rights outside of City Hall. Then I informed them of my intention to chalk in front of their HQ. I was really just telling them what I was up to so I wouldn't get tasered or shot; I wasn't asking them for permission or to cut me a "break".
It didn't go over very well.
We argued for about 20 minutes, during which time one officer insisted that the "ground" in the Arizona Revised Statutes (pasted below) refers to dirt, not the sidewalk or street or anything paved. I was ultimately threatened with arrest on the spot and being booked into jail for criminal damage if I proceeded to chalk the walk, which I did.
I told them as I was walking out the door that I'd respect their access to their loading zone - which one officer made a good point about - but that as I understood it, chalking sidewalks isn't against the law, and if they really believed it was to come and get me. I'd rather have it out once and for all in court than haggle with them about it every time. Sooner or later, one of them is bound to hurt me.
They left me alone once I got started. They didn't even take down my personal information when I offered it (they probably already know who I am and where I live...).
Perhaps the "Graffitti Detectives" will chase me down another day. In the meantime, though, since my free speech at City Hall had just been stomped on, I still needed to make a "Happier New Year" card.
Here's two: 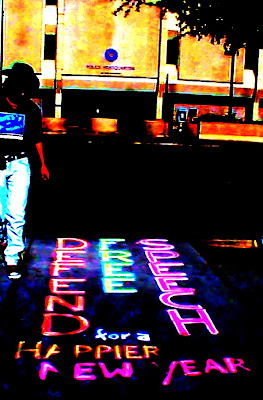 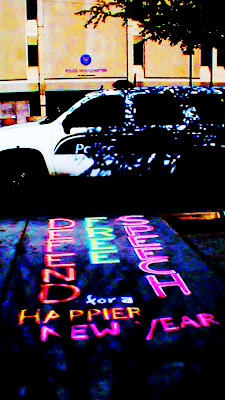 What is "reckless" and who "owns" the ground and surface? Surely it was taken a long time ago from the rightful inhabitants of that place?