Today, at SRP, we won - at least that small battle to disrupt business-as-usual for a day and bring media attention to the cause. This was this most profoundly spiritual act of resistance I've ever witnessed, blessed by the Elders of different Indigenous communities from beginning to end... 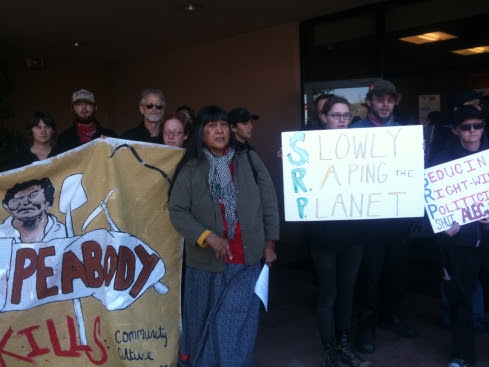 
TEMPE, AZ — Indigenous Dine’ (Navajo) and O’odham elders and supporters are taking direct action by occupying Salt River Project (SRP) headquarters today at 10am. This action is occurring while the American Legislative Exchange Council (ALEC) holds their “States & Nation Policy Summit” in Scottsdale, AZ. SRP is on ALEC’s corporate board. 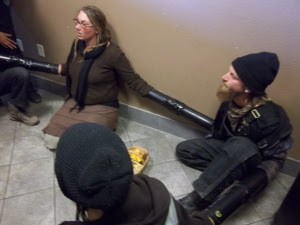 Louise Benally, a resident of Black Mesa impacted by SRP’s operations, is delivering a letter to SRP that outlines critical concerns of her community. She expressed that “My community is heavily impacted by Salt River Project’s coal and water extraction activities. SRP has extensive ties to Peabody Energy’s massive mining operations and the Navajo Generating Station which they co-own. Coal mining has destroyed housands of archeological sites and our only water source has been seriously compromised. Their operations are causing widespread respiratory problems, lung diseases, and other health impacts on humans, the environment, and all living things.”

“…We demand that SRP & Peabody meaningfully involve the indigenous communities they are impacting, and that they convert to non-fossil fuel based energy sources and address the health impacts on our communities.”

“…ALEC, acting in the corporate interests of SRP & Peabody Energy, continues policies & operations that are not only devastating whole communities and ecosystems, but greatly de-stabilizing our planet’s climate for the profit of a few, the so-called 1%.” stated Benally.


Ofelia Rivas, an elder and activist of the O’odham, Indigenous Peoples on the border of Arizona and Mexico, states “As indigenous people we understand that the balance of the land is actually the balance of our people and any disturbance of that is very devastating not only to our spiritual health but our overall physical health, as well as all living things. As indigenous people we are not separated from our environment. We’re deeply connected to everything in the universe: the land, the mountains, water, air, and all plant and animal life.”

“…The proposed loop 202 freeway extension that threatens South Mountain and the continuing construction of the US and Mexico border and it’s militarization. Trade policies such as NAFTA and CANAMEX alter our way of life and threatens our Him’dag. We will no longer accept the violence the state attempts to enforce on us along their border. Especially the aggressive legislation of ALEC. We demand you recognize the declaration of universal indigenous rights as well as the rights of our mother earth. Enough is enough, it ends now!”

The massive canals constructed before colonial invasion of O’odham lands are now being utilized by Salt River Project. O’odham culture is deeply rooted throughout this area, which is as far north as the Phoenix Valley, as far west as the coast of Mexico in what is now Rocky Point, east as the San Pedro river and as far south as Hermosillo and the Sierra Madres Mountains.

Ray Aguilar stated that “the air conditioning and power we enjoy and water we drink comes at the suffering caused by SRP and Peabody’s exploitation of the land and people. When will we realize that our privileges our based on this? We must take further action. I just spent one week doing direct, on-land support with Black Mesa residents assisting with basic essential human needs. That’s why I’m here today. This critical situation would not exist if not for these greedy corporations.”

Since 1974 more than 14,000 Dine’ families have been forcibly removed from their ancestral homelands due in large part due to U.S.-backed tribal councils and cola mining.

To protest the deadly legacy of environmental and cultural destruction caused by the company’s collusion with Peabody Energy the protest has stated the following:

To the Owners, Operators, & Beneficiaries of Salt River Project,

We are a community that is heavily impacted by the Salt River Project’s coal and water extraction activities.

We are particularly impacted by Peabody Energy’s mining operations to which you have extensive ties, the Navajo Generating Station which you co-own, and the exploitation of the water that underlies our ancestral lands. We wish to formally bring before you some critical concerns of our community.

The Navajo Generating Station and Peabody’s mining operations cause widespread respiratory problems, lung diseases, asthma issues, other health impacts on humans, the environment, and all living things. We don’t have access to health insurance. The plants and animals are also impacted and there are no studies on that.

There is no remedy for that for now.

Peabody is an extremely disrespectful company, they’re tearing up everything for the coal. Mother earth and our cultural resources such as sacred sites are not at all respected. Back in the mid-nineties, grandmothers were defending the land when the mine was being expanded more and more, and we witnessed peoples’ graves being totally bulldozed. They have been exploiting and destroying sacred places, and that is not being talked about.

And the coal ash that they’re trying to dump on our lands now—it’s really no different than the uranium that we have suffered from for so many years. It’s toxic and poisonous, and there’s no safe place to store the coal ash.

The mining needs to stop. Until then, we demand that you honor the clean air act and the EPA’s highest standards by installing the best retrofit technology available on the Navajo Generation Station to reduce pollution from mercury, arsenic, and other toxic pollutants being released in to the air.

Our water is being exploited and our aquifers have been depleted for decades, causing springs to go dry and vegetation to change. Salt River Project needs to stop manipulating the Navajo and Hopi tribal governments, coercing them to sign agreements without consent from tribal members. Our water resources are not replenishable, and without the water, we cannot continue our way of life.

The beneficiaries of the energy and water you sell must realize that our suffering is a direct result of their consumption. They must also understand that the continued taking of finite “natural resources” is creating imbalances that threaten the survival of everyone’s future generations.

These issues are not being heard: Stop exploiting and destroying our ancestral homelands. Stop poisoning us. Stop meeting behind closed doors. Stop greenwashing your unfair and harmful practices. Recognize that you have a unique ability and thus a responsibility to put an end to these things, and that by not­­­­ doing so you are also harming yourselves.

For information on ALEC protests: http://azresistsalec.wordpress.com and
http://www.alecexposed.org
Posted by Margaret Jean Plews at 10:02 PM