Anyone who has done research into evidence-based practice knows this...AZ legislator John Kavanaugh only shows his ignorance in the article below... 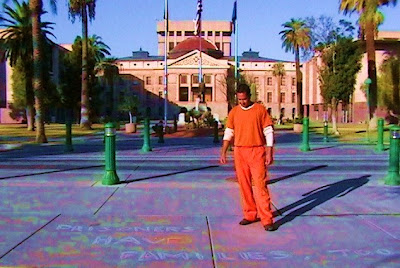 Just a single visit from a family member or a friend can make a big difference in whether or not a prisoner ends up back behind bars after their release, a new study finds.

The study, by researchers with the Minnesota Department of Corrections, determined that prisoners who received at least one personal visit at any time during their incarceration were 13 percent less likely to commit another felony and 25 percent less likely to end up back in prison on a technical parole violation. Data showed that the more visits prisoners received, the lower their chance of re-offending after release.

The study tracked 16,000 prisoners over nearly five years, making it the largest such study of its kind, according to Grant Duwe, director of research for the Minnesota Department of Corrections, who led the research team. The study will be published in the Criminal Justice Policy Review, a peer-reviewed academic journal.

Duwe said prison officials in Minnesota were already weighing how to apply its results to the state's corrections policies.

"I think the completion of this study gives us some tangible evidence to show that if we can increase visitation, we can give offenders more of the social support they need to succeed," he said.

Several previous, smaller-scale studies have found an even larger correlation between prison visitation and inmates' likelihood of re-offending. But most state prison systems continue to see visitation as a privilege, not a tool to help inmates establish law-abiding lives after their release, Duwe said.

"I think visitation has been largely viewed as a concession that's given to inmates," he said. "I don't know if there has been a great deal of thought given to the public safety benefits that visitation might have."

As the economic slowdown has bitten into state budgets, some prison systems have already altered visitation policies in order to save money. In Minnesota, a temporary government shutdown earlier this year led to the suspension of all prisoner visitation as a cost-saving measure.

In July, Arizona lawmakers imposed a one-time $25 fee on all adult visitors to inmates. Funds from the fee are to be directed to maintenance of state prisons. Middle Ground Prison Reform, an advocacy group, filed suit against the state, calling the fee an "unconstitutional tax."

"If this policy results in delaying or diminishing or eliminating prison visitation for anyone, the state is shooting themselves in the foot in terms of rehabilitation," Donna Hamm, a retired municipal court judge and executive director of the group, said in September, according to the Associated Press. "That's a very short-sighted view of public safety policy."

John Kavanagh, the Republican legislator who wrote the provision, scoffed at the idea that the fee would discourage prison visitors, however.

"If a one-time charge of $25 is enough to dissuade you from visiting your loved one, then I'm wondering how much of a loved one he or she is," he told the Arizona Daily Star.

Duwe declined to comment specifically on the Arizona policy. But he said the results of the Minnesota study clearly suggested that states have a fiscal incentive to encourage visitation, not discourage it.

A single parole violation that returns a released inmate to prison, even briefly, costs upwards of $9,000. A prisoner who commits a new felony and spends additional years behind bars will cost far more.

"The benefits we could see from a reduction in recidivism could vastly outweigh the cost of increasing visitation," he said.

A few states, such as Idaho and Virginia, are already experimenting with a novel and cost-effective way to boost interaction between inmates and their loved ones: internet-based video visitation systems, which have proven popular with inmates and administrators.

Yet while a growing body of research shows that overall, visits by family, friends, religious figures and community mentors are overwhelmingly positive for inmates, data from the Minnesota study shows that one type of visitor should probably be avoided. Visits by an ex-wife or ex-husband, it found, can actually lead inmates to commit more crime after their release.

"Visits from ex-spouses could do more harm than good," Duwe said. "That was kind of an interesting finding."

Posted by Margaret Jean Plews at 6:32 AM