Here's the MCSO Booking area, where Marty Atencio was attacked; this footage comes via Dennis Gilman, who edited hours of tapes. I, frankly, see no provocation for that Phoenix cop to take down Marty the way he did, much less for ten more officers to jump in...

Here they are putting Marty in a "safe room" now. I have a problem with this policy of stripping mentally ill or unstable prisoners naked to assure their "safety"  - it just compounds trauma with humiliation.

Good coverage and observations below, from the Phoenix New Times: Check out links to Stephen Lemons' continuing coverage of the death of Marty Atencio here.

Last week, Marty Atencio's brother Mike told me that he and his family believe Sheriff Joe Arpaio's detention officers "murdered" his brother, leaving the 44 year-old Army vet dead in a cell, only to ship him out to St. Joseph's Hospital later, so the MCSO could deny that Atencio was an "in-custody" death.

On Tuesday, Atencio's family made the decision to remove him from life support, but the family's attorney Mike Manning later noted, "[Atencio] died in the jail."

Friday, the MCSO released eight hours of video, some of it documenting Atencio's stay in the sheriff's custody. The chilling words of Atencio's brother and of Manning have not been rebutted by that footage.
Watch the video above, taken from hours of jail tape the MCSO unceremoniously dumped on a ravenous media Friday afternoon. What do you see?

I see a pack of uniformed officers jumping on one unarmed man, who seems to be making no aggressive moves toward them.

While beneath this pile-on, Atencio was Tased. That the Tasing was unnecessary is self-evident.

There's also creepy footage (not seen above) of Atencio being thrown naked into an isolation cell. In it, Atencio is not moving, and looks to be unconscious.

The scene in the cell is eerily reminiscent of MCSO video of Juan Farias Mendoza, an inmate allegedly beaten to death by detention officers in Arpaio's jails back in 2007.

Mendoza was 40. Atencio was 44. Both men were Tased several times in custody. And each man was a father. Mendoza had three kids. Atencio's family told me he has four, ranging in ages from 15 to 24.

The world might never have known about Mendoza, had not an anonymous tipster informed New Times of his brutal demise. Recently, Maricopa County settled with Mendoza's family to the tune of $1 million.

Which makes you wonder: How many incidents like these have occurred in Arpaio's gulags that we don't know about.

The media has been in a feeding frenzy over the Atencio death, coming as it does on the heels of the U.S. Department of Justice's watershed report on the MCSO's discriminatory practices toward Latinos in and out of Arpaio's jails.

So the Atencio family's response to the video's release, in a statement given to the press by Manning, seems wise and measured, an example of dignity in the face of the media's hunger for information and Arpaio's spin machine:

"The Atencio family has instructed that I make no comment today concerning the jail video just released by Sheriff Arpaio," Manning said. "They are deeply grieving the death of their Marty and do not want their burden and hurt to interfere with the joys, blessings, and good cheer that other Valley families are looking forward to on this eve of the Christmas weekend. We will have a comment on Monday or Tuesday."

Atencio was acting erratic before and after his arrest by Phoenix cops on charges of assault. The Atencio family has indicated their loved one was bipolar and not on his medication at the time of his arrest.

Manning's stated that blood tests of Atencio done at St. Joe's showed no illicit drugs or alcohol in the man's system.

Such factors aside, there's no excuse for such a death. Despite this, the MCSO boasts a gruesome track record of citizens dying needlessly in its custody.

These individuals often become victims because they are already part of some at-risk group.

Over the years, New Times has stood sentinel for them all: the diabetic mom denied her medication, the mentally retarded man asphyxiated till brain dead; the legally blind man beaten till comatose; the drug addict son offed in a restraint chair of the kind now banned from Arpaio's jails; and so on.

Now New Times stands sentinel for another in a long line of those neglected and abused by the MCSO -- the beaten, the Tased, the tortured and the slain. A line destined only to end when Arpaio is removed from power. 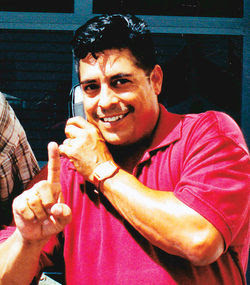