This document could go a long way towards changing the Hawai'i prison system; I'm impressed that it was released by the state Attorney General. That, in turn, could have ripples elsewhere - certainly in Eloy, AZ, where Corrections Corporation of America incarcerates nearly 2000 Hawai'ians.  Eloy has real problems - as does CCA.18 Hawai'ian prisoners are suing employees at Saguaro prison there for torture, and one is suing for sexual assault (the guard who perpetrated it was actually prosecuted).

All either Eloy or CCA seem to be concerned with is the money they can make in Arizona, of course, not reducing crime or victimization in Hawai'i or human rights abuses in their own community. If Hawai'ian legislators don't get on the ball with sentencing and prison reform, they should be called out as either incompetent or corrupt - no one can afford for any of them to be indifferent to the prison crisis anymore.


Read the report this links to, then find your state legislators here.


Call or write to them here:


The key term is "evidence-based practice". Good luck. I hope you manage to wage a successful boycott of Eloy and CCA by the time this battle is over. Israel outlawed private prisons because the profit motive is in direct opposition to human rights concerns - maybe Hawai'i will abandon them as well, for all the right reasons. 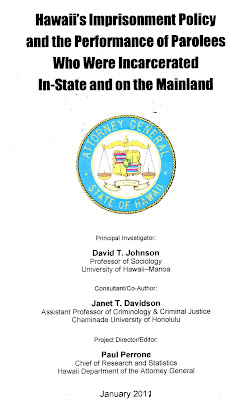 
This study examined the records of the 660 persons who were released on parole in the State of Hawaii between July 1, 2005 and June 30, 2006 (Fiscal Year 2006). It addresses two main questions: What are the demographic and criminal history profiles of parolees who have been incarcerated in Hawaii and in private prisons out of state? And, how do the recidivism rates of these two groups compare? Using records obtained from the Hawaii Paroling Authority, the Department of Public Safety, and the Department of the Attorney General, parolees were tracked for three to four years after their release from prison.

The study found that:

- 54 percent of Hawaii’s prisoners are incarcerated in private prisons on the mainland — the highest percentage among all U.S. states.

- 75 percent of Fiscal Year 2006 parolees never served time in a private prison on the mainland, while 25 percent did serve time there.

- Of the one-quarter of parolees who have been imprisoned on the mainland, 70 percent served half or more of their time there.

- The average time served on the mainland was 3.5 years.

The analysis of the parolees’ demographic and criminal history profiles found that:

- Parolees in the mainland cohort had somewhat more felony arrests and felony convictions per person than did parolees in the Hawaii cohort.

- Parolees in the mainland cohort had been convicted of fewer property and drug crimes, and more violent and “other” offenses, than had the parolees in the Hawaii cohort.

- The average maximum sentence for parolees who had been incarcerated on the mainland was longer: 10.9 years, versus 8.5 years for the Hawaii cohort.

- The average time served by the mainland cohort was longer: 6.2 years, versus 3.2 years for the Hawaii cohort.

- As compared to their male counterparts, female parolees in both cohorts were more likely to be property and drug crime offenders.

- There were no statistically significant differences in ethnicity between the two parole cohorts. Most notably, Native Hawaiians comprised 40 percent of each cohort.

The analysis of recidivism found that:

- Parolees in the mainland cohort received significantly lower scores on the Level of Service Inventory-Revised (LSI-R). Hence, mainlanders had fewer needs for service and a lower average risk of recidivism than did parolees in the Hawaii cohort.

- In the aggregate, the LSI-R scores predicted recidivism fairly well.

- A little more than half of parolees in both cohorts failed on parole within three years.

- The average time to recidivism in both cohorts was about 15 months.

- There was more recidivism among the mainland cohort for parolees in the higher-risk LSI-R categories.

- There was more recidivism among the mainland cohort for violating conditions of parole.

- Nearly half of all rearrests were for violating the conditions of parole.

- In both cohorts, older people recidivated less than did younger people. Age is a powerful ally of efforts to stop criminal offending.

- There were few significant differences between the two cohorts in acts of misconduct committed while in prison.

- Furlough programs were related to significantly lower rates of recidivism among mainland parolees, but not among parolees who were imprisoned only in Hawaii.

Recommendations from this study:

- Since there is no empirical justification for the policy argument that private prisons reduce recidivism better than public prisons, the State of Hawaii should decide whether to continue, discontinue, expand, or contract its reliance on private prisons based on other criteria. While cost is one criterion, it is not the only one that is important to consider.

- It is ill-advised to rely on a framework for thinking about corrections (herein termed humonetarianism) that stresses short-term financial savings at the expense of programs aimed at improving the prospects for offenders’ rehabilitation and the satisfaction of their basic needs and rights. Long-term savings are often found in forward-thinking policies and programs.

- The State of Hawaii needs to calculate more inclusive and accurate estimates of the cost of incarceration in-state and in private prisons on the mainland.

- Much more research needs to be done in order to adequately describe the contours and consequences of Hawaii’s correctional policy. One high priority is a study that explores who gets sent to prison (and where). The present study examined only persons who were released on parole.

- The State of Hawaii should conduct more research about its correctional policies and outcomes, especially given a policy world that is increasingly evidence-based.

- The Department of Public Safety and the Hawaii Paroling Authority need an integrated records management system. At present, inmates’ records are often incomplete, scattered, and difficult to locate.
Posted by Margaret Jean Plews at 10:18 PM