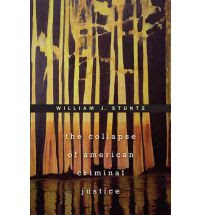 Why the justice system does a bad job of separating defendants who deserve punishment from those who don't.

How has the American criminal-justice system become one of the most punitive in the world without providing a corresponding level of public safety? In "The Collapse of American Criminal Justice," William J. Stuntz—a revered Harvard law professor who died of colon cancer earlier this year at the age of 52—offers a provocative big-picture answer.

Perhaps aware that "collapse" in the book's title requires justification, Mr. Stuntz begins by reviewing some statistics. As he shows, in the 1950s, 1960s and early 1970s, amid the largest crime wave in American history, the U.S. prison population declined. Imprisonment rates plummeted to some of the lowest ever seen in the modern Western world. High-crime neighborhoods, as Mr. Stuntz puts it, were "abandoned to their fate."

The backlash to this crime wave was equally striking. Since the mid-1970s, America has punished crime more and more severely. New York's imprisonment rate, for example, has sextupled. In a span of a little more than 30 years, "America first embraced punishment levels lower than Sweden's, then built a justice system more punitive than Russia's."

Mr. Stuntz readily acknowledges what many legal scholars do not: America's current lock-'em-up philosophy has dramatically helped to reduce urban crime. Since 1991, violent-crime rates have declined roughly a third nationwide and as much as two-thirds in a few cities (New York among them). Even so, Mr. Stuntz counts these declines as a pyrrhic victory, given that violence per capita in the U.S. today remains significantly higher than in 1950. And he is unwilling simply to assign all the credit for recent crime drops to increased punishment. He wonders, for example, why crime rates began falling only around 1991—two decades after prison populations started steeply rising.

To unravel such complexities, Mr. Stuntz tries to place America's contemporary criminal-justice problems in their historical legal context. He first looks at the 14th Amendment's effort in 1868 to ensure that newly freed slaves received "the equal protection of the laws"—a promise that fell apart a few years later when the Supreme Court eviscerated the equal-protection guarantee and left generations of Southern blacks to be victimized by Klan violence. Mr. Stuntz argues that narrow equal-protection jurisprudence helps to explain why, nearly a century later, Chief Justice Earl Warren began spinning constitutional restrictions from the 14th Amendment's other important provision, the Due Process Clause.

Justice Warren faced a Southern criminal-justice system that treated blacks unequally. More generally, he was dealing with an American system that did little for indigent defendants. But rather than address racism and poverty head-on as equal-protection matters, the Supreme Court let old precedents divert its attention to due-process claims. The court ended up dealing with such problems indirectly through an array of new procedural requirements. For example, the Warren Court tried to rein in questionable police evidence-seizure tactics by imposing an exclusionary rule on the states (in Mapp v. Ohio). The court likewise responded to unequal treatment during police questioning by creating its famous warning and waiver requirements (in Miranda v. Arizona).

This web of new procedures had an important effect: Defense attorneys, embracing the new rights, did not bring forward evidence of their clients' innocence but instead sought to suppress evidence of their guilt. Whatever the other merits of the procedures, they were bound to make the justice system do a worse job of separating defendants who deserve punishment from those who don't.

Mr. Stuntz powerfully argues that such decisions have perversely worsened inequality in the criminal-justice system. The Miranda rule, for example, gives sophisticated suspects—mainly recidivists and white-collar defendants—the ability to "lawyer up" and avoid questioning altogether. Many other suspects—including the innocent but poor—waive their rights and receive less protection than they did before Miranda.

These excessive procedures contributed to a new punitiveness in criminal sentencing, Mr. Stuntz says. With fewer violent criminals successfully prosecuted under Warren-court restrictions, those who are convicted are incarcerated longer. And because of the difficulty of finding witnesses willing to testify against gang members and other violent criminals, easily proven "surrogate" crimes (namely, drug possession) are punished more harshly.

"The Collapse of American Criminal Justice" concludes that our system suffers "from the rule of too much law and the wrong kind of politics." Mr. Stuntz recommends a host of reforms, including decentralization that would encourage local control responsive to local crime. He also argues for expanding city police forces—because the increased police presence would discourage the commission of crimes.

But he seems to back away from his argument that excessive proceduralism is part of the problem. While critiquing decisions such as Mapp and Miranda, Mr. Stuntz never urges that they be overturned or restructured, even though such changes could lead to the decentralized decision-making that he supports. Instead, he singles out for overruling Supreme Court precedents limiting equal-protection argument by defendants. He targets United States v. Armstrong, for example, which barred drug dealers from arguing that prosecutors must be racially discriminating when statistics indicate disparities in charges being brought. But overturning the law would lead to precisely the kind of procedural litigation that Mr. Stuntz deplores.

Nonetheless, the overarching themes of "The Collapse of American Criminal Justice" deserve wide discussion, and the book as a whole can be rightly seen as the capstone to a distinguished legal career. Americans may debate whether our criminal-justice system has truly collapsed, but few would argue that it can't be improved.

Mr. Cassell is a professor of criminal law at the S.J. Quinney College of Law at the University of Utah.

Posted by Margaret Jean Plews at 3:56 AM